Home » Recipes » Watch the Sausage Be Made…

Watch the Sausage Be Made…

Who says you shouldn’t watch the sausage being made? Pish posh. This is where families come together…or at least mine. Maybe we’re a little weird, back-woods, or touched? Well, whatever avenue you may choose to wander, feel free.

Every year the family gets together to go hunting outside Winthrop, Wa. The past few years, while being away at school and working in the real world have not allowed me to go up to hunting camp or help with the post-hunt processing. But this year, I decided I needed to lend a hand. It was a very small hand compared with the work everyone else did, but to be there with even a few of the family members was a total blast.

My older brother Blake and cousin Tony got deer in camp this year. It was an average year. Last year was a bit freakish, yielding 6 deer in camp – the processing took two straight weeks. I am kind a glad I wasn’t there for that hot mess. I just reaped the tasty tasty reward in the form of endless summer sausage and pepperoni. 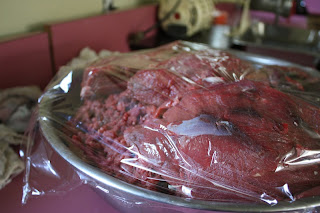 Oooo oh it’s only the beginning. Look at the red meat deliciousness. 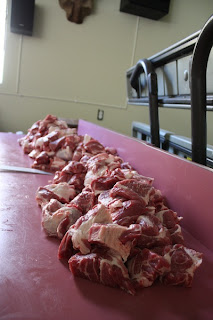 With the summer sausage, it was mixed with pork adding a yummy fatty essence of awesome to it. 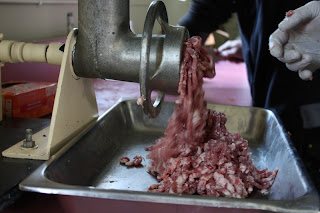 The pork then had to be cut up and then ground into submission. 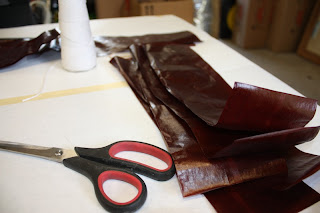 While my dad and I completed that task, Blake too the preparing of summer sausage casings. Just imagining what those would soon be filled with mad me gleek a little. Ya know that feeling you get when you just smell sea salt and vinegar chips? Well, take that and amplify it. 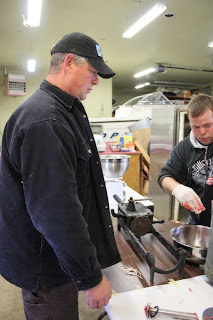 Doug did a great job guiding and ‘snooper’vising all of the efforts the youngings put in. Meh, he has paid his dues and now we bummed all his equipment, so he earned his rights to direct and judge our efforts. 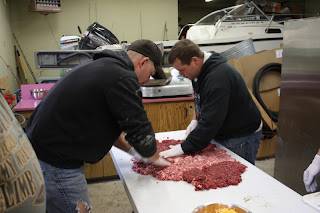 Tony and Josh mixed, mashed and melded all the pork, venison and sausage until it was ready to be packaged up. Look at how much that’s going to make! 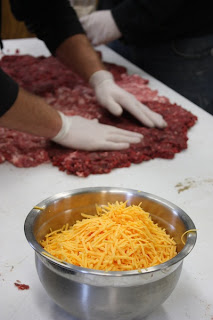 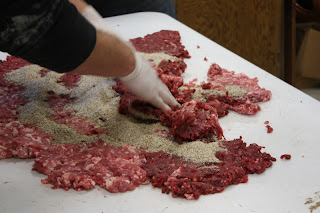 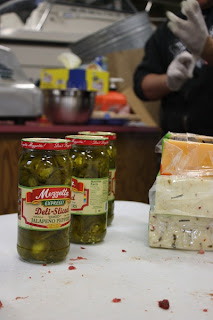 Tony being the brave, or crazy one, decided that adding a jar of jalepenos and juice to his batch was a good idea. Oh, and pepperjack cheese too. Yeah, are we on the same wave about how crazy this is?!
Toilet paper in the freezer, hello!?! 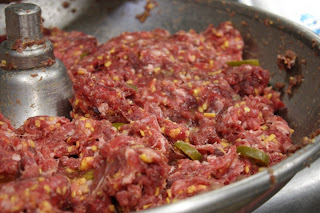 Not only can you see the cheese, but the jalenpenos! Ahhhhh! 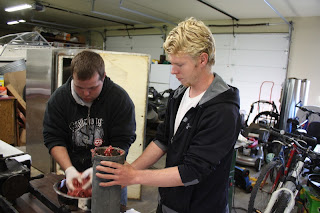 Blake and Josh dutifully stuffed the stuffer with the meat, prepped for packaging. 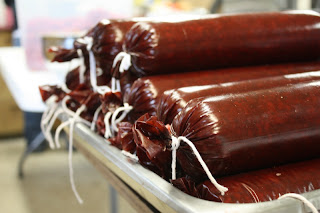 And after two batches, there were 16 2-lb skins of summer sausage with plenty more to go.
Another deer another sausage. After the smoking and curing is done it will be ready to go for the holidays, football game days, and just any-time consumption.
Count me in.
Maybe someday I’ll get the guts to go get my own deer. But after 25 years, I’m pretty content just reaping the benefits of others hard work.
This site contains affiliate links, if you make a purchase through them, we receive a small commission.
Recipes

2 comments on “Watch the Sausage Be Made…”