There might be things missing from this epic journey, for the simple reason that four days of straight road tripping have caused things to blob together in an amalgamous mess. So, if you choose to keep reading and are willing to hang in there with me, I hope this whole post won’t be a disappointment.

When I left off, I believe, it was in Wyoming. Well skip ahead and I can tell you that we covered Lyman, Wyoming to Lincoln, Nebraska in one day with a quick stop in between at the University of Wyoming for a couple of UW hats. There might have been pictures to post, and there might well be, but really my brain is shutting down quicker than I can……..wait….what?

Sara, Sophie the Crazy Pup and I didn’t make it into Lincoln until well in to the night, not allowing us much time to sight see or get anymore cool University of Nebraska gear like we had intended. But cie la vie. When we awoke early the next morning we got back on the road, with coffee in hand. (It was Starbucks no less!!)

As we traveled along there were many gorgeous sites to see, especially in Iowa where we made a stop at the Iowa Firefighter’s Memorial. Let me tell you, if you aren’t typically a cryer – this will move you deeply. 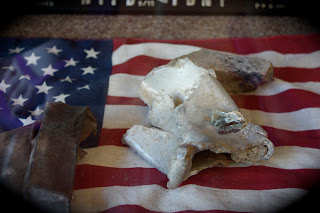 Amongst the gallery were sections dedicated to firefighters in other nations, but the most moving was the section dedicated to the Firefighters of 9/11. Above is a picture I took of actual pieces of the Twin Towers. There were letters left from fellow firefighters that brought me to tears.
They are brothers, missing and gone forever and their sacrifice will never be forgotten or taken in vain.
There is one Sister of theirs who holds it very dear to her heart as well… 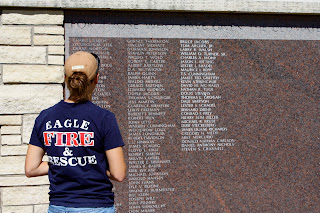 Sara.
(She completed her training earlier this year back in Idaho – she’s kinda awesome like that).
After the emotional trek to the memorial, we had to plug away and make some headway to Indiana – when we had only make it so far as Iowa. 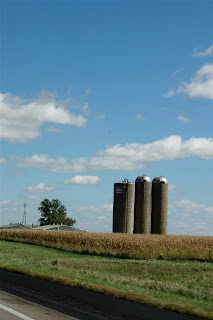 And through Iowa, there is some of the most gorgeous country and farmland one would ever see.
Rolling hills, trees, old barns and silos, cows and big pickup trucks. Can you say, heaven?
*Nod Yes…*
Not to be outdone in our own geekiness, through Illinois there was another slight detour to Moline. For anyone not familiar with Moline, does the name John Deere ring a bell? As in, their factory and headquarters?
After a jaunt across the Mississippi river… 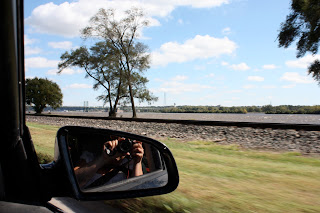 (here is is…it’s kinda muddy and brown. eww)
We stopped in a the show room to oogle over the new, old, restored, and collectible pieces that made you want to throw on a pair of overalls and call yourself a farmer.
See, I told you there was geeking out involved!! 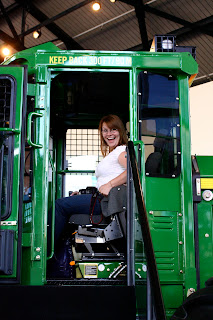 But, look at what was attached to the front of this machine – I promise it doesn’t disappoint. 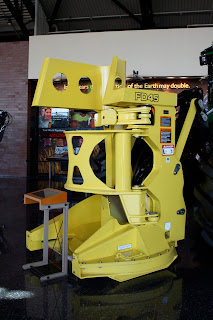 A feller buncher!
For most it won’t seem like such a much, but for any self respecting lumberjack or logger – you should be drooling right now. I sure was!! (Oh, for those who don’t know, I used to be a competitive lumberjack – hence my massive geeking) 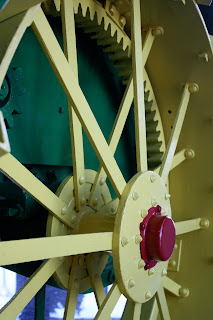 To distract me from the feller buncher, there were collectibles equally as beautiful to drool over. Look at those wheels. 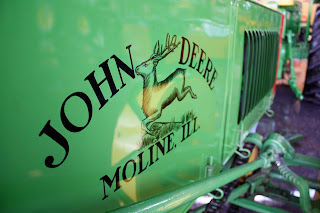 And look at that logo – my how times have changed.
Finally, at 12 o’clock last night, the three weary travelers made it to Fort Wayne Indiana. 16 hours traveling, going crazy, and thankfully not killing each other along the way.
It was a great (albeit, LONG) day.
And now – to bed.
This site contains affiliate links, if you make a purchase through them, we receive a small commission.
Recipes

One comment on “Road Trip Part 2 – Lincoln to Indiana”