Kvetchin’ Kitchen Guest Post – aka It’s Beka and her Mushrooms!

If you’ve been around WBACC for any length of time, you’ve already been throughly introduced to and become friends with (albeit electronically) my bestie Beka. We’re kind of attached in a ridiculous way. It’s more than an “attached at the hip” friendship – there is a freakish Volcan Mind-Meld thing we got going on…like those freakish twins that can feel eachother’s pain. Make sense yet, or are you terrified now? Either way, I wanted to give you a first hand look at my bestie and give her a chance to show you all why I totally and completely heart her. Feel free to visit her brand spankin’ new blog Kvetchin’ Kitchen, show her a little love and stroke the ego a bit. A good ego strokin’ puts a little bounce in your step. Take it away Schmoopy! 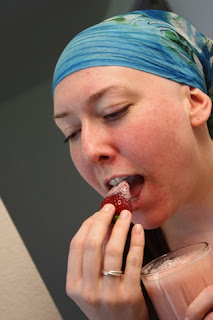 I saw for a while, staring at a blank screen, trying to figure how to even start this! It’s very unsettling – the white screen… and all that Megan has built this up to be… I got a little intimidated! I just wanted you to know that – incase this post disappoints you… I was ascared.
I’ve known Megan for almost 7 years – and we only hated each other for 1 of them (I kid – but really, we lived together in a teensy dorm room and had 3 of our 4 classes together… it wasn’t all hugs and kisses). But we found our groove together and have been peaceful ever since! In our college apartment, we would take turns teaching each other our home-cooked secrets. One day, she came to me and asked me to show her how to roast a chicken, so she could impress this guy. So, as best I could, I showed her a very simple way to roast a chicken. Just a short time after it went into the oven (the point of no-return), it became clear that the guy did not want to come inside and eat, he insisted on taking her to a fancy restaurant in town (I had assumed, to impress her). And, like girls will do, I got irrationally mad. Because as she left on her fabulous date, I was left at home, to turn and tend to the chicken that refused to cook (we learned later that the heating element was broken… which is why it took 4 hours to roast a teensy little chicken).
The chicken was finally done, and as it sat on the counter resting, I was sure that it was mocking me. So, I angrily cut it up (that’ll show it!) and froze it. Because I sure as heck wasn’t going to eat such a rude, angry bird (LOL – Angry Bird! Sorry – I’m addicted). She came home, and it wasn’t a fabulous evening. And instead of being the kind, empathetic roommate, I ignored her, because I was really mad about the chicken, see?
*Editor’s Note* – I got dumped that night – so I *Megan* was a complete and utter wreck, inconsolable and had snot running down my face kinda tears goin’ on and no to bestie who’s shoulder I could cry on… but that’s neither here nor there… We’ve moved on. It’s funny – NOW.
But I didn’t stay mad for long, and of course I got over it, and she got over it. But the Mean Chicken stayed in the freezer until the day we moved out of that apartment. And we didn’t eat it. Because then it would win.
This isn’t a recipe about roasted chicken, though. This is a recipe about mushrooms. Roasted in butter. And spices. Let me start by saying that at the time of the Mean Chicken incident, I hated mushrooms. We had just learned in biology that mushrooms were some freak of nature – not quite “plant” because it didn’t perform photosynthesis, and not quite “animal” because it doesn’t chew much… but it seeks out nutrients with roots that move. Hunting roots. Creepy, no? And after freaking all of you out, I’m going to show you a recipe that will turn it around for you. Because if you roast anything in enough butter and garlic (and spice, if you’re into that sort of thing) then it will be delicious. Especially if you eat that with bread. Delicious bread… Obviously, I was cured of my aversion to mushrooms, because Megan and I (with our menfolk) went to eat at a local restaurant chain called Matador.
The special that night was roasted mushrooms (they had a fancier name, but for the life of me they haven’t been on the menu since and now I can’t remember). 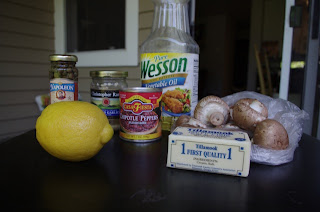 This was amazing food – but especially these mushrooms. Hot and spicy, but not so spicy as to hide any flavor, but just enough to wake up your tastebuds, and butter (so much butter!) and garlic, and what we can only guess to be chipotle peppers. We ate it with bread. And then they tried to “help” and get the “empty” plate out of our way, except it still had all the butter juice on it! And you can be sure that we kept it at the table, because I was going to drink that if I had to. (maybe too far? Well, I had enough bread to clean the plate). 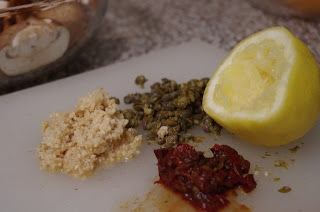 And like any good restaurant, they don’t divulge their tasty secrets. So, like any good set of friends that have lived through a Mean Chicken incident, Megan and I figured out this recipe together. The basis of the recipe is a Garlic Butter Mushroom recipe from Smitten Kitchen. And then I played with it a little to make it a spicier Latin version. You could also replace other soft actual vegetables if fungus still gives you the heeby-jeebies. I imagine that zucchini spears would have a very similar roasting time; carrots would be excellent, but take longer; peppers would be tasty, but might dissolve before the sauce really develops…
1 lb mushrooms (we used white button – but cremini would also work)
1 T capers, rinsed and chopped
4 large garlic cloves, minced
2 T oil (olive or vegetable – we used vegetable this time, but I think that olive with add a nice finish)
4 T butter, cut into pieces (I used salt – don’t hate on me)
Pinch of red pepper flakes (depending on how spicy you like it)
2 chipotle peppers, chopped
½ lemon-worth of juice
BREAD. Oh so much bread. Something crusty (sourdough, maybe)
Preheat oven to 450. Mix together oil, capers, garlic, pepper flakes, chipotle. Toss with mushrooms, to coat. Pour into a pan to contain the deliciousness. Put pats of butter on top of mushrooms. Put in oven for 15-20 minutes. You will smell when it’s done. Nom nom nom. When it’s out, finish with lemon (it’s refreshing!), let it cool just long enough that your mouth won’t be burned for a week. Try to breath between bites. 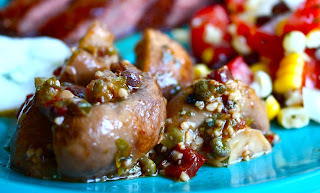 This site contains affiliate links, if you make a purchase through them, we receive a small commission.
Guest Post

4 comments on “Kvetchin’ Kitchen Guest Post – aka It’s Beka and her Mushrooms!”