What I’m Listening To – Podcast Edition 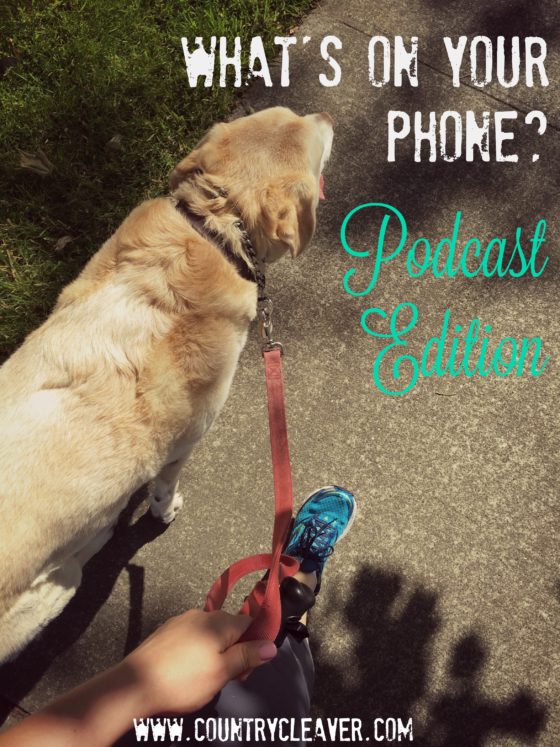 I literally just got back in from a walk with the dog, before it got blisteringly hot out (at least by Seattle standards), and was thinking… do I dare share the contents of my iPhone with the world? Also, does anyone care? Probs not. But I walk the dog a lot, and I needed some new stuff to listen to besides the same 23 songs on the radio. So here they are, all my podcasts, in their embarrassing glory. 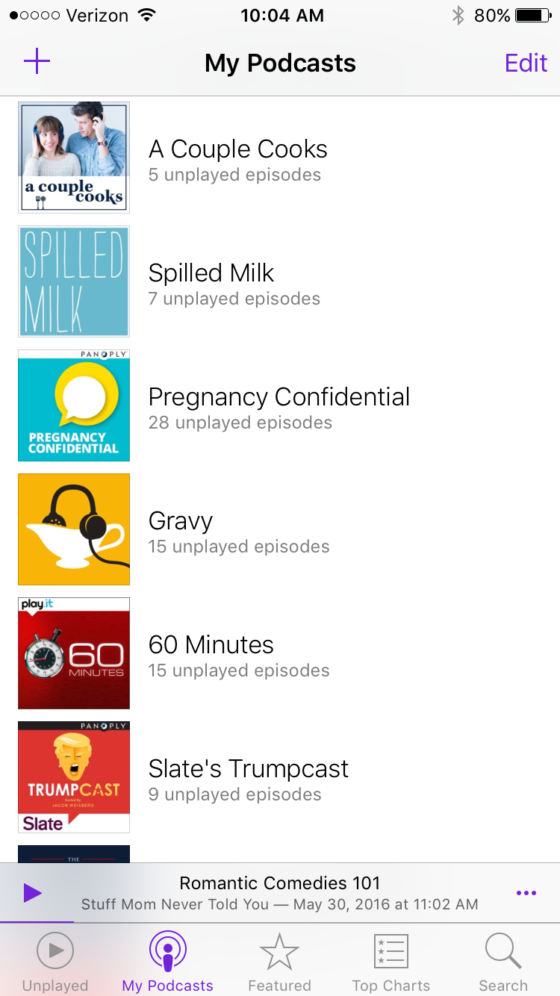 A Couple Cooks – I met Sonya of A Couple Cooks in April at EatSeaRetreat. And she is a GEM! When she told me she and her husband did a podcast, I flipped and immediately subscribed. They cover everything food, and one episode I am behind on currently is “How to Cook as a Couple”, because Ben and I don’t cook together, and hopefully that will change. I want him to see the same joy in cooking as I do. We shall see! 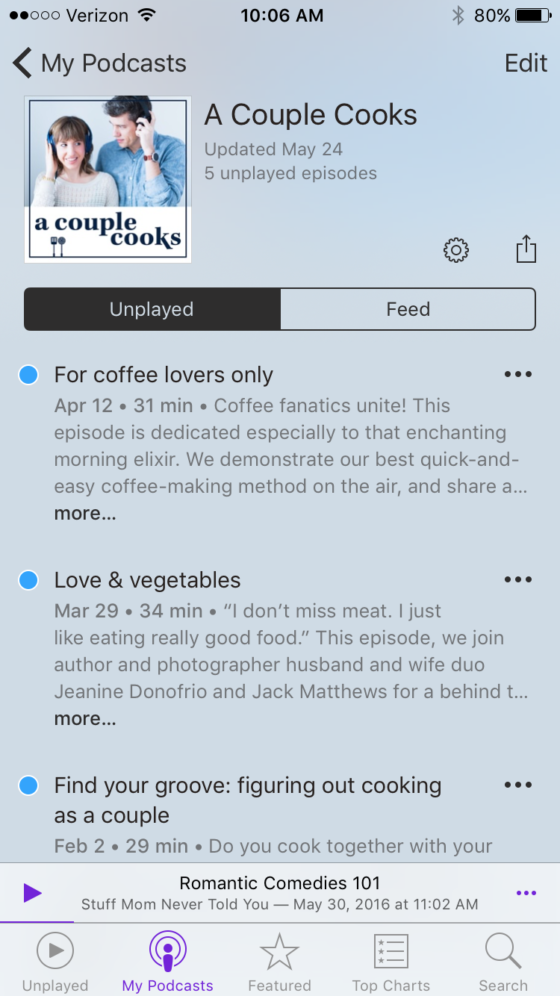 Spilled Milk – They talk about everything from giving the low down on Vinegar, to Oreos, and Cough Drops. It’s hilarious, and a local to Seattle! Woot! Love it. PS – the 420 episode was hilarious.

Pregnancy Confidential – I’m going to say this now, NO I’M NOT PREGNANT. But I have had so many pregnant friends as of late, I am brushing up on my baby knowledge. They make pregnancy hilarious and not-as-scary, so that’s helpful when my time does come.

Gravy – Yes, another food podcast. But trust me, they aren’t all like that! This one is from the Southern Food Alliance and we are talking about some people with some serious food cred. It’s southern food all the time. Food History of all your southern favorites.

60 Minutes – Yes, I (begrudingly) watched it every Sunday night before the Simpsons growing up. Now I listen to it. Anyone else sad over Morley Safer’s passing? Me, too.

Slate’s Trumpcast – Okay, we aren’t getting political here, but this one. I earned a degree in Political Science and I love that this podcast talks to psychologists, media, historians, lawyers, supporters, and denouncers of the current presumptive Republican nominee. They look at it from all angles in a critical and in depth way. If there is a Hillary podcast like this one, I want to know. 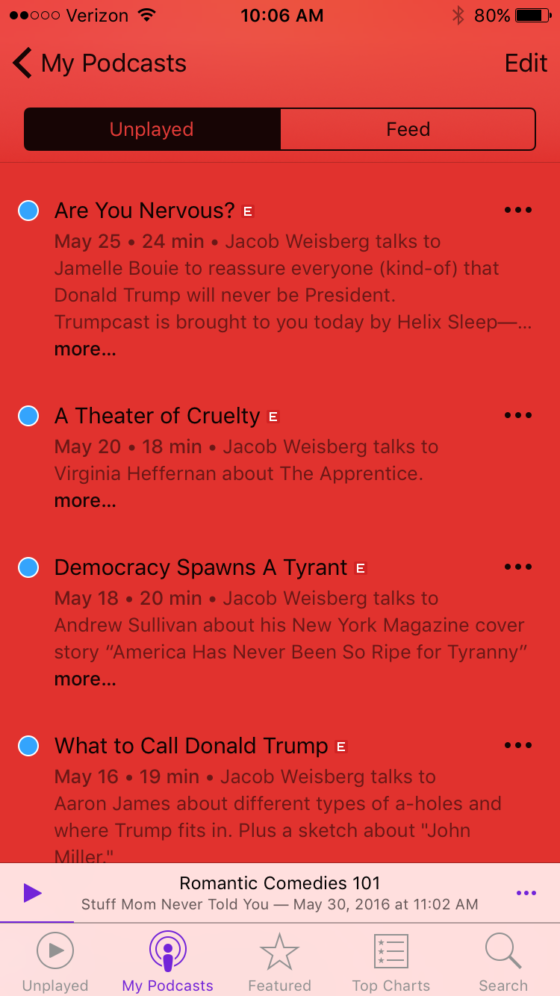 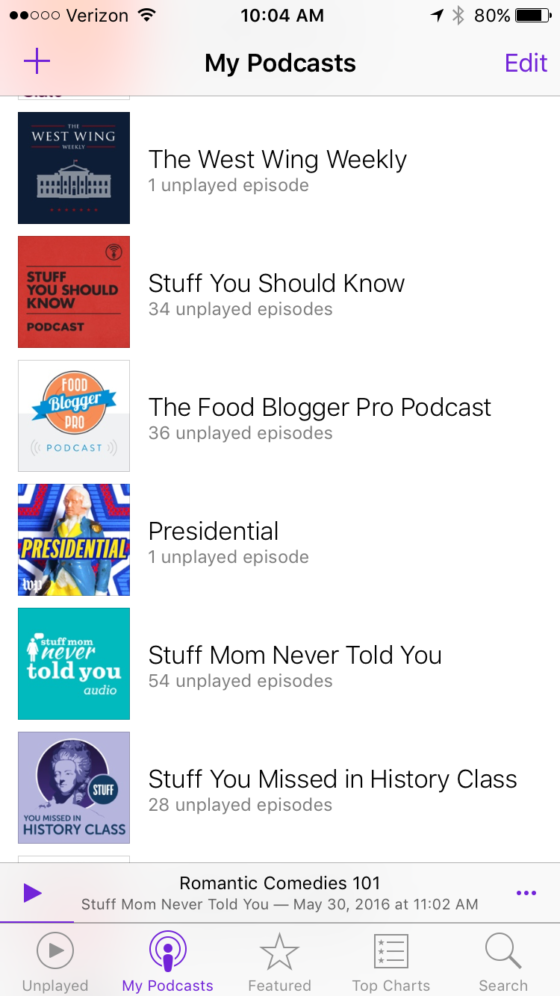 The West Wing Weekly – Political Science Nerd Alert! This is my FAVORITE TV SHOW EVER! If I can attribute my degree path to anything, it’s this show. Josh Molina who played Will Bailey on the show, and you know him now as David Rosen from Scandal, is hosting this podcast. I LIVE for Tuesday morning releases so I can listen on my way to work. And they talk to other cast mates episode by episode. 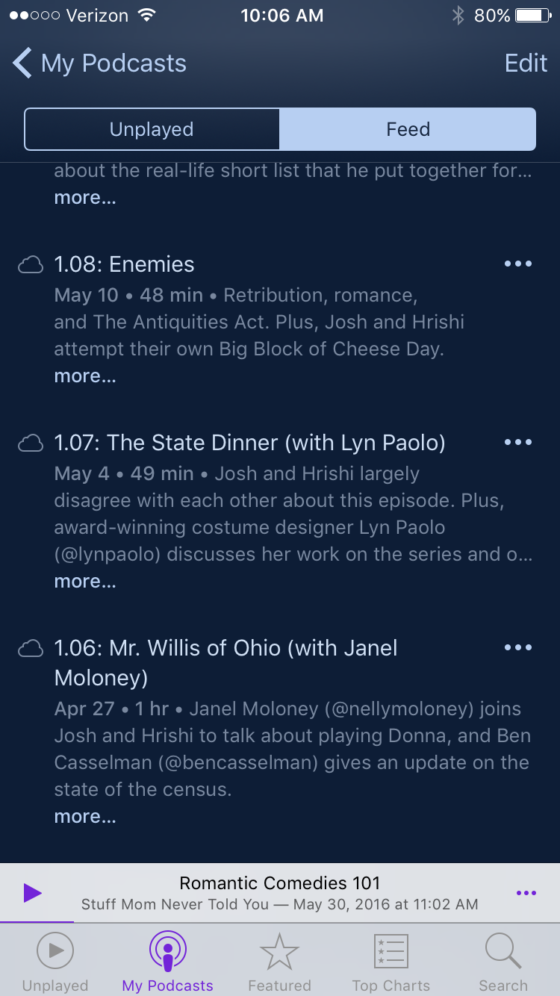 Stuff You Should Know – How Gene Editing works, survival cannibalism, How the Gender Pay Gap Works, and Who Gets To Name the Continents. This seriously covers everything under the sun, and the guys are HILARIOUS and derpy.

The Food Blogger Pro Podcast – I adore Bjork and Lindsay, and their podcast really dives deep into all aspects of what we do as bloggers. And it gives me new ideas and insights every week. Their intro music is also equally as catchy. If I could just listen to that 30 seconds on repeat I would be so happy.

Presidential – This one from the Washington Post dives into the history, lives, and politics of every single president. I just finished Chester A. Arthur on my walk with the dog a few minutes ago – and he was a fascinating character who completely revolutionized how the government hires people. It sure wouldn’t be the same today if he hadn’t done what he did! Every week it’s a new president and it will go until the week of the Presidential Election this year. Still plenty of time to catch up! 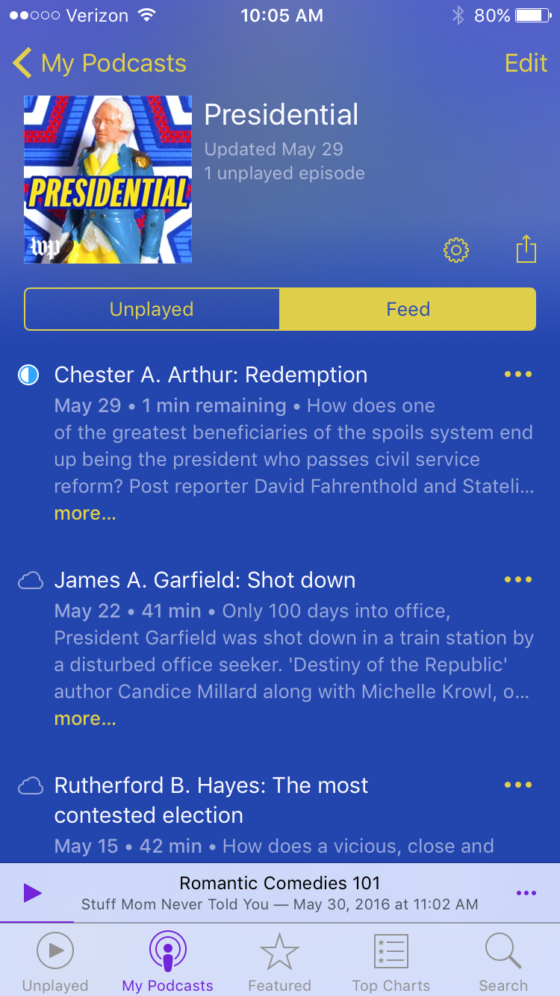 Stuff Mom Never Told You – This one is probably my favorite. Cristen and Caroline are both light hearted and make all of the unique experiences of being a women approachable. We’re talking about stuff from the legal history of sexual harassment, to how to be a lady boss, and NASA’s Hidden Computer Women open topics for real discussions. No man bashing! See more of the feed below.

Not to mention the latest podcast I’m on is RomCom 101. You never knew so much about romantic comedies. You’ve Got Mail is a heavy topic of discussion. (Also, one of my fave movies, like EVER). 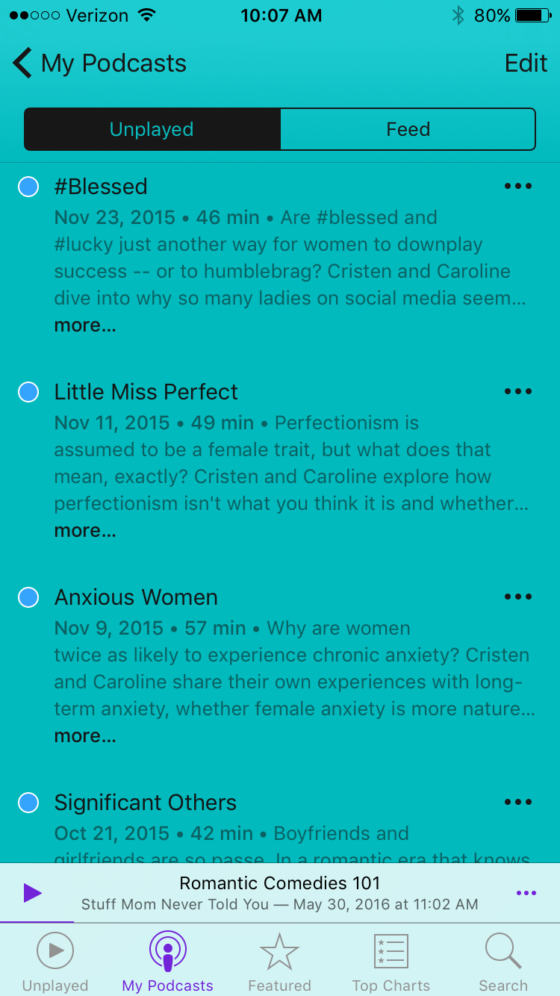 Stuff You Missed In History Class –  Did you know that knitting had such a history? And it was a vital part of the wartime efforts? Leprosy has a dark connotation to it, and how we treated people who were different was a tragic mark on our history. It’s fascinating for the history nerds out there like me. 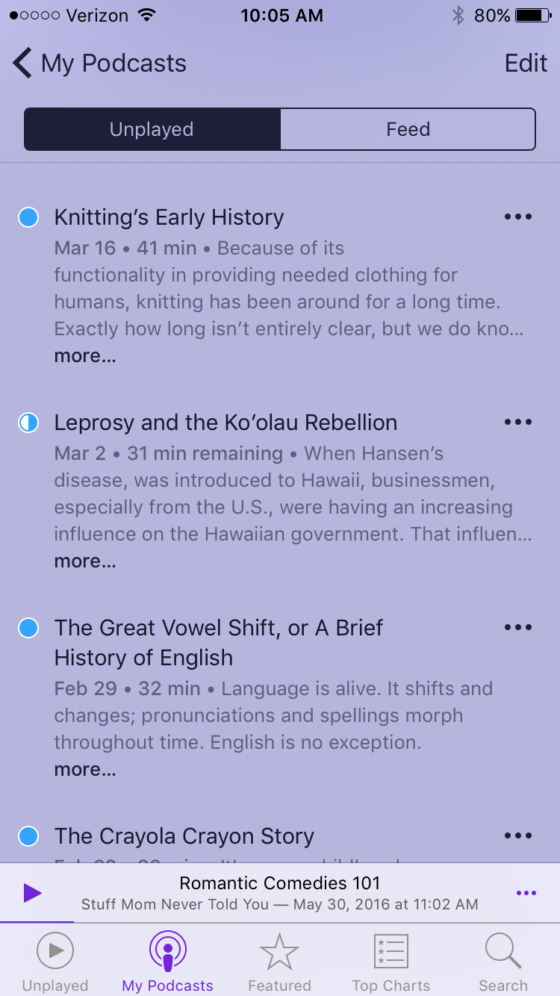 America’s Test Kitchen Radio -And obviously last but not least, ATK. I’m behind, but I love catching up with my favorite TV cooking show. The team is great and they are a constant source of knowledge. It’s exactly like the show, with call ins from fans, and product reviews just like you get if you were sitting on the couch watching in your yoga pants.

There are lots of others I’m downloading but not subscribed to. See what else there is out there and if you have a favorite – TOTALLY LET ME KNOW! Leave a comment and fill me in on what I should subscribe to next. 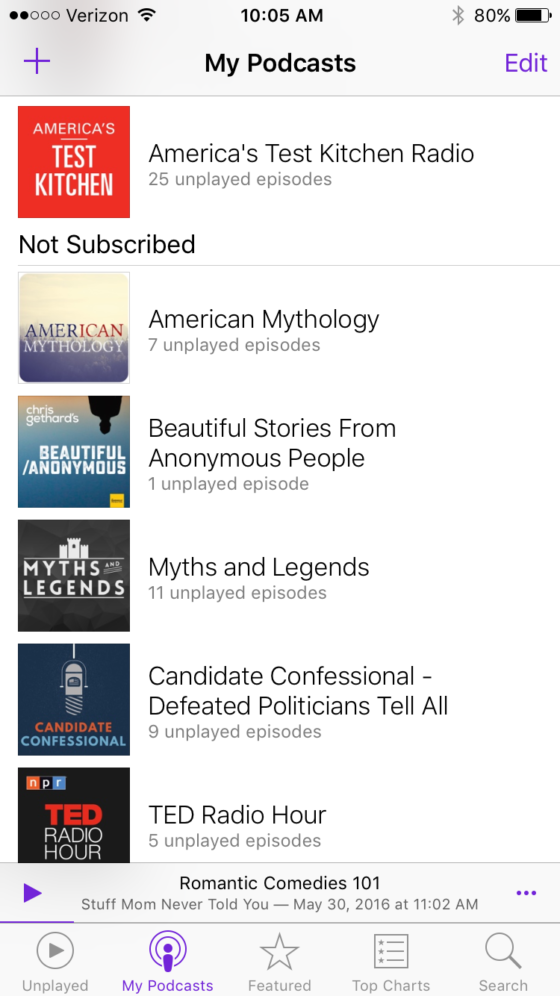 This site contains affiliate links, if you make a purchase through them, we receive a small commission.
Life

4 comments on “What I’m Listening To – Podcast Edition”