Ben and I recently went to Hawaii for two reasons, my youngest sister was getting married – Awww! – and to get away for a few days – Yay! We circled Oahu and found the best guide to everything that the island had to offer. We really found the true spirit of Aloha and enjoyed ourselves to the nth degree. There are things you must see and things worth skipping, so here they both are in an easy list just for you. Jet set to Hawaii as soon as you can. It’s positively out of this world.

It’s a thing, and I for one – love it. *ducks and covers* Spam and eggs for breakfast? Check. Spam and rice? You got it. Spam in sushi, yup! 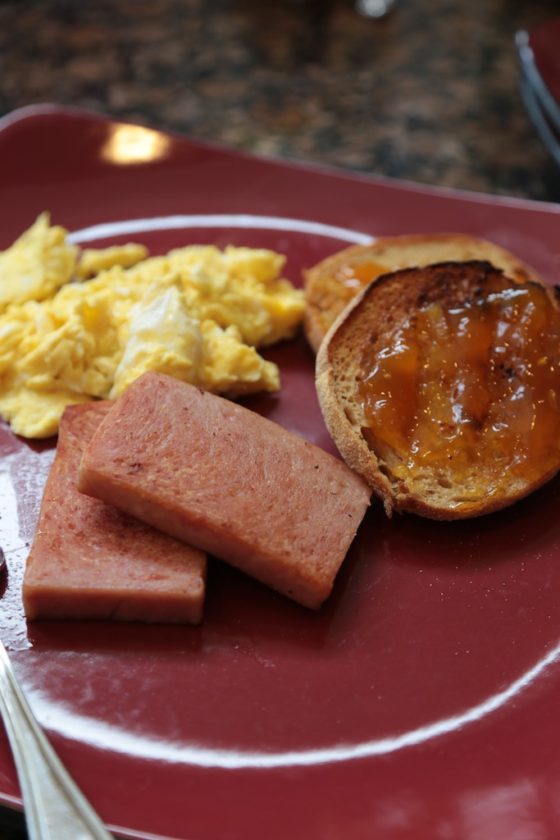 Or, better yet – a motorcycle – even if it’s just for a day.

Oahu has the most efficient bus system known to man – truly it’s incredible, but make sure you rent a car and take a drive around the island to the north shore. There is so much to see that isn’t in Honolulu and not on the main Waikiki strip, you do not want to miss the true spirit of Hawaii in the country. Head out and see it for yourself. Even if it just for one day.

Dig into a Plate Lunch

Plate lunch is a big deal, and you can find food trucks, drive ins or cheap eats that feature plate lunch. Whether it’s pork and chicken long rice, or beef and gravy – just find it! Ben and I were told to head to the Rainbow Drive-In and it was a winner! You know a place is amazing when there is not a parking space to be found and lines to the lot. After my first bite I didn’t even care we had to circle the block and get honked at 3 times just to find a spot. Worth it! 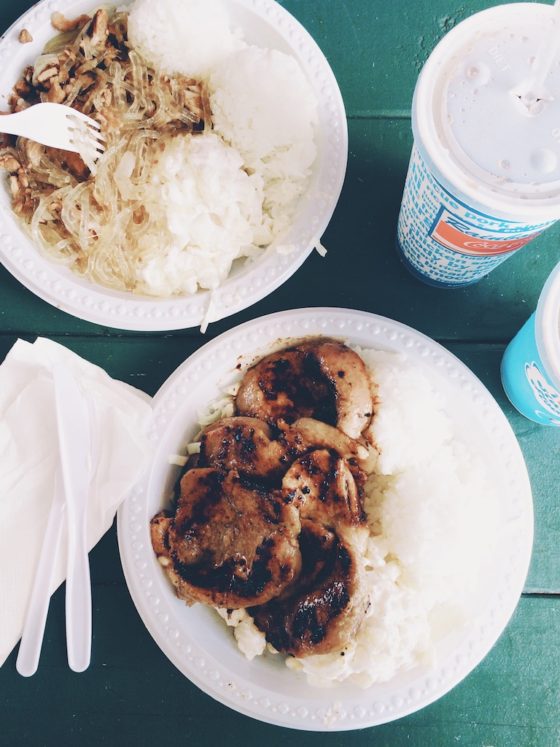 Start early in the morning and make your way up to the top of Diamond Head. Not only does it have 360 degree views, but it holds massive amounts of Hawaiian cultural and American military history. The trail gets packed with people, so start early to get the best views.

Treat yourself to Malasadas! 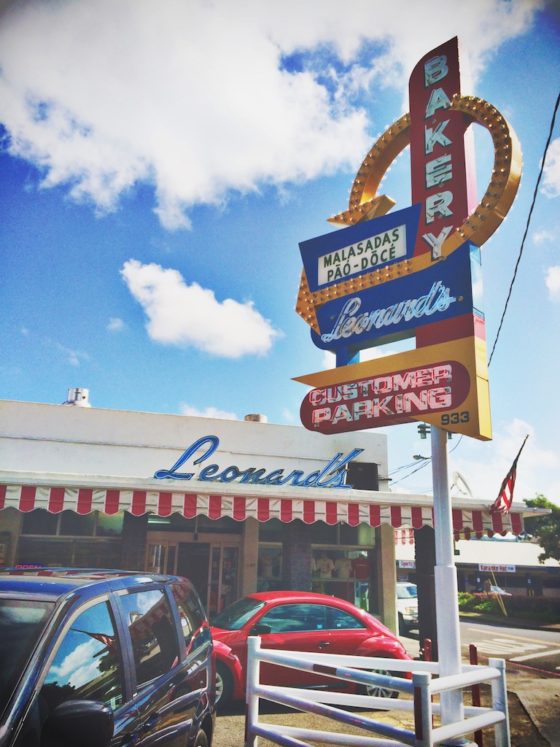 Especially after you hike it up Diamond Head. It’s definitely a great reward. We went to Leonard’s Bakery for ours, but Kamehameha’s is known for theirs too! The macadamia nut custard ones I had – out of this world! 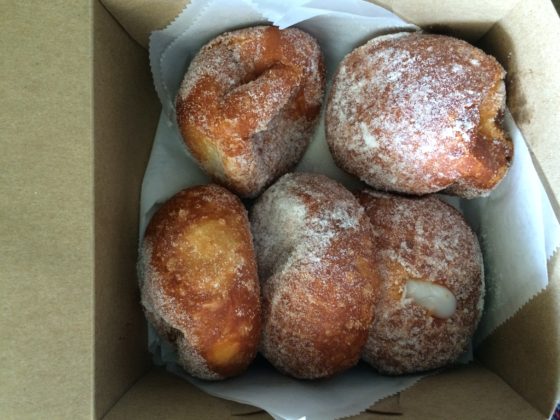 Even if you’re not a swimmer, like Ben who is a notorious sinker, the water in Hawaii is so salty your buoyancy is definitely helped. Ben really enjoyed snorkeling. We were lucky enough to leave the house and go right outside our back door at the house our family rented a few days on the North Shore. The fishes are like nothing you’ve seen before. But if swimming in an uncharted or undesignated area isn’t for you – try Hanauma Bay for the beginner. It’s well known for starters in snorkeling and they can help with gear and everything. 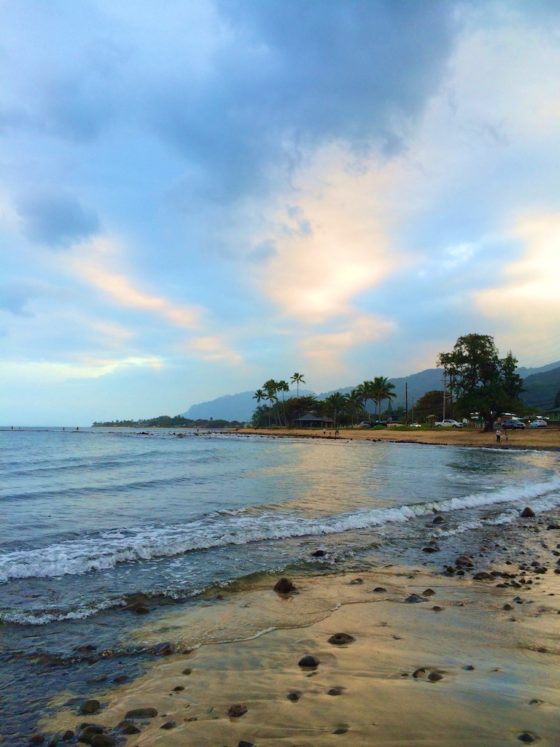 We had a few Mai Tai’s while we were on Oahu and the best one we had was found appropriately at Mai Tai at the Royal Hawaiian. YUM!

Hawaiians take their coffee just about as seriously as us Seattlites, especially when it comes to their prized Kona coffee. But true Kona is money honey.

We picked up authentic Kona coffee from the Honolulu Coffee Company, where I got an education on all of things that make Kona coffee Kona Coffee. Ben and I spent our last morning in their coffee shop learning, eating, sipping, and utterly savoring every pour out of our french press and made from scratch croissant. Worth every penny. 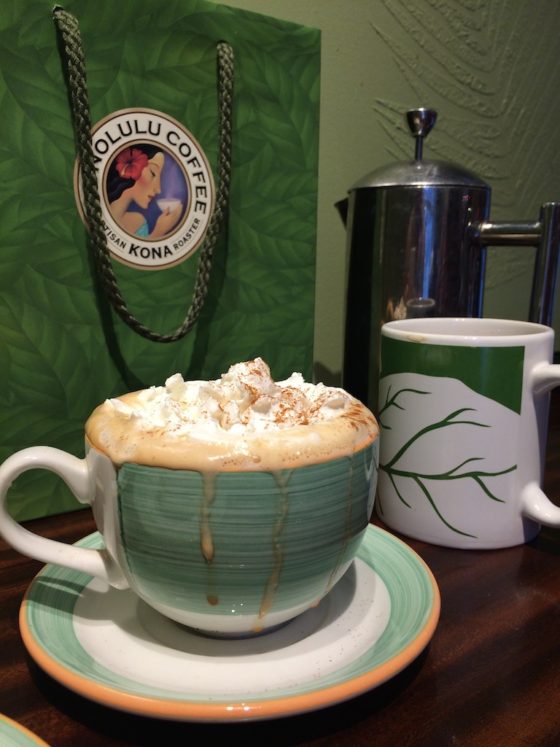 On the North Shore the shrimp grow large, and there are food trucks every. Enjoy them in abundance. 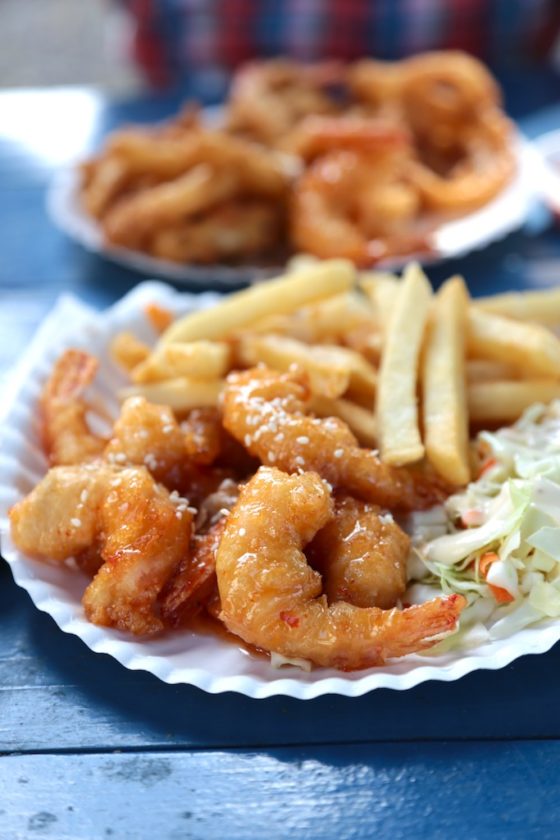 It’s a place of solemn reflection, tragedy and rebirth in so many ways. It is absolutely worth the drive, or bus ride, to get there. Buy your tickets ahead of time here from Reacreation.gov,  just to ensure you get a spot on a boat tour out to the Arizona. You can take a chance of getting tickets if you just show up, but they are first come first serve. So reserve them ahead of time and save your sanity. Even if you can’t make it to the USS Arizona, there is a LOT to see and do at the Memorial, including a tour of the USS Bowfin submarine, and more.

It’s moving, frightening, touching, peaceful, and harrowing. Do not miss it. 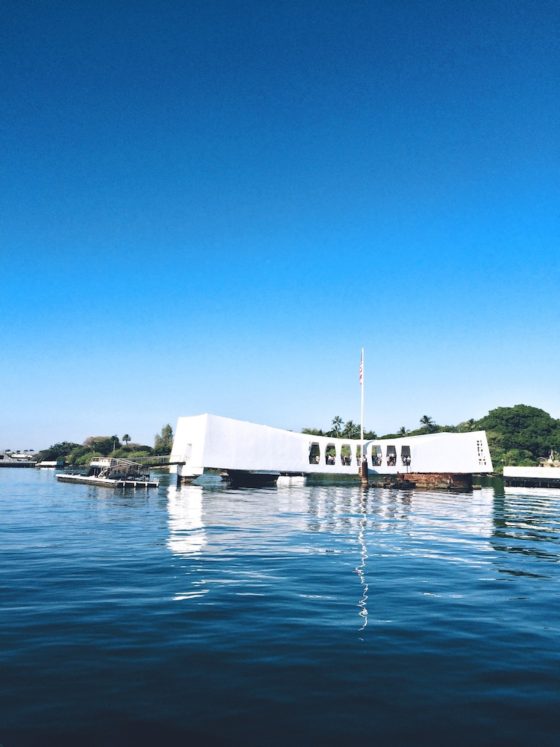 The USS Arizona is known for “weeping” a few quarts to a gallon of oil a day. It paints a mosaic into the waters surrounding the wreckage. But as you peer over the edge of the memorial you can see that it has become a place of rebirth by way of an artificial reef for native fish swimming in schools, eels and a number of other inhabitants. For all of the tragedy, you can’t help be moved by the horror, and the living that has come after. 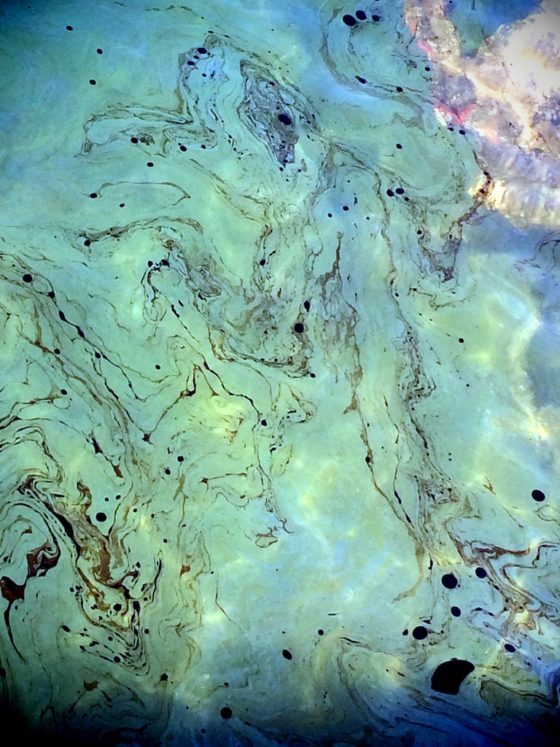 Watch The Sunset and Sunrise

Actually sit, take it in, and just listen. On the east side of the island you will see sunrises of indescribable beauty, and on the west side sunsets of the same.  Put the phone down and just etch it into your memory.  Park your keister on the beach and just listen and soak it in. 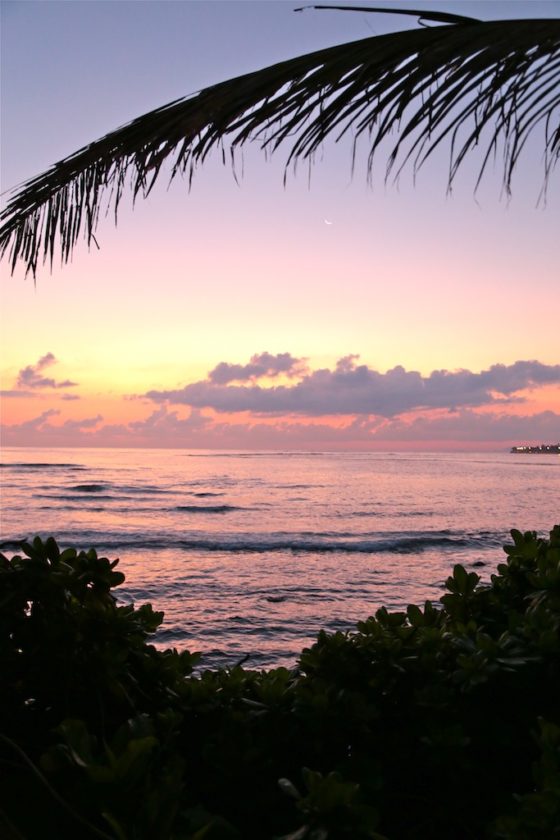 The sunrise on the North Shore in Hu’aula. 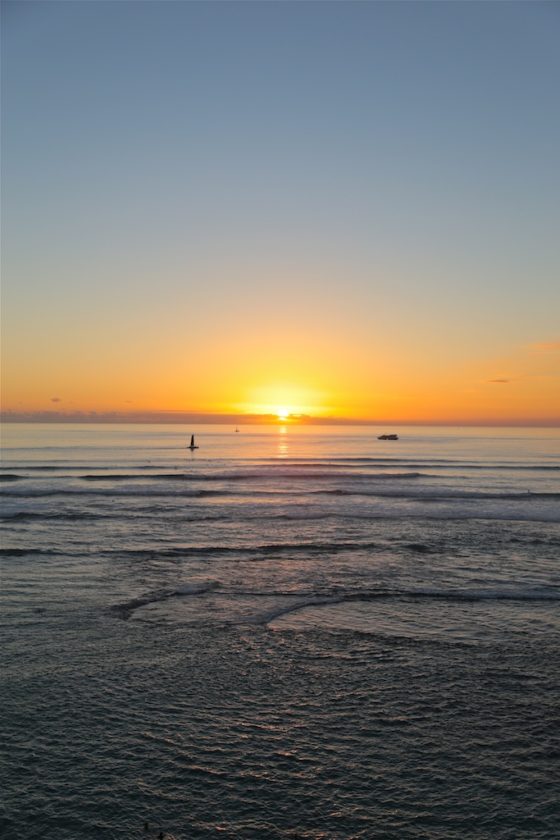 The sunset from the balcony of our hotel at the New Otani Kaimana Beach Hotel. The gray whales even made an appearance that night. It wasn’t like Hawaii had impressed us enough as it was – they just had to add in the whales to seal the deal. Well played Oahu, well played.

Stay off the Strip

Walking the Waikiki main drag is a lot like walking the strip in Vegas, especially on weekends and major holiday weekends. All the familiar chain stores and restaurants are there – and I say, avoid them! If you want to see and feel Aloha, you’re not going to find it at the Cheesecake Factory. Steer clear!

Go see the best surfers on the island, especially in the winter. Or just watch the waves roll in. The sound is almost deafening and just exhilarating. Plus, surfers. WIN! 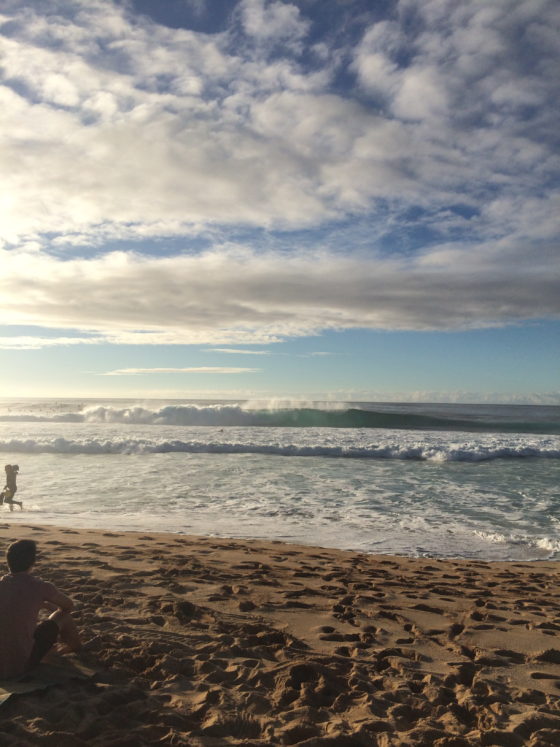 19 comments on “Your Ultimate First Timers Guide to Oahu”