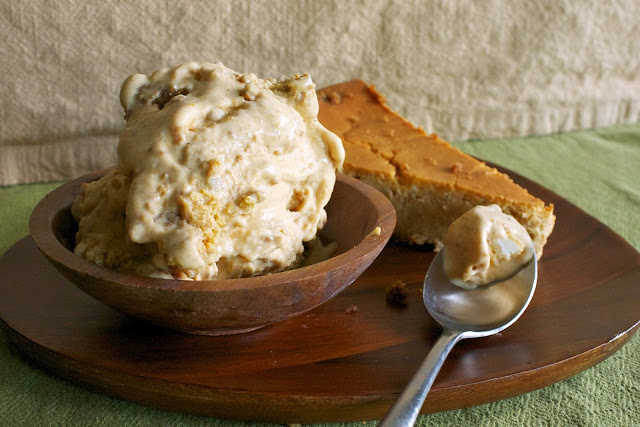 More Pumpkin Cheesecake Gelato.
Okay fine, maybe it doesn’t have the same ring to it as “More Cowbell”, not that that has much of a ring to it either, but there are no words to describe the utter sinfully deliciousness that this is.
It’s that time of the year where everything is pumpkin, everything has an orange tint to it and if I were to scarf down much more I’m going to start taking on a shade that lends itself to fake tanning… but no it would be due to pumpkin, not indoor lightbulb cancer.
A couple of weeks ago Ms. Lauren of Lauren’s Latest posted her recipe for Pumpkin Pie Ice Cream.  Her recipe spoke to me in no uncertain terms. The message was somewhere between an “If you make it they will come” and “Follow me to the dark side, we have ice cream”. No buts about it, I could not resist the call of homemade pumpkin ice cream.
Instead of going the route of Pumpkin Pie ice cream, I wanted to take it up a notch – with cheesecake. *Hallelujah*
Traditionally, cheescakes and I don’t get along. Water-bathing my cheesecakes always end in disaster with a leak that I thought was plugged, or my oven protesting that I over-work it and it refusing to get to or maintain a proper temperature. And this time, was no different. The recipe I used for my initial cheesecake was appropriately named “Perfect Pumpkin Cheesecake” and indeed it was perfect – except for the protesting oven, it got too hot and ended up overcooking my cheesecake!
Then I proceeded to pour myself a glass of wine and eat a slice out of sheer resentment. The cheesecake was NOT going to beat me. It was a delicious victory, if you want to call it that.
Now, I should note something – if you don’t want to make a whole cheesecake, I won’t judge. There are plenty of them about in local groceries, so if there is a slice pre-made that you’d rather pick up and toss into your gelato – by all means, do it! Save yourself the time in front of the stove.
So, for the gelato and your grocery list include:
~ 2 cups Half and Half
~ 2 cups Heavy Whipping Cream
~ 5 egg yolks
~ 1 tsp Vanilla
~ 1 tsp Pumpkin Pie Spice
~ ½ c. Sugar
~ ½ c. Brown Sugar
~ 1 ½ c. Pumpkin Puree (Not Pumpkin Pie Mix)
~ 1 slice Pumpkin Cheesecake
The night before, I put my ice cream freezing bowl into the freezer to get a chill on. And yesterday, I prepped the pumpkin custard. I started by whisking together the two sugars. One half was going to be immediately incorporated into the egg yolks and the other into the cream mixture.
Before: 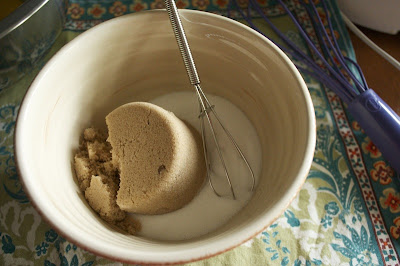 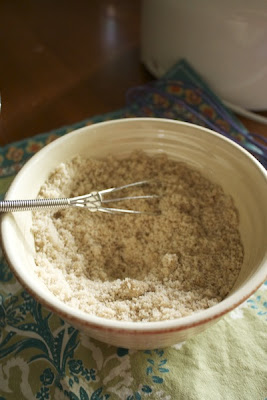 Into the five egg yolks, half of the sugar went and the two were whisked into fluffy submission.
Before: 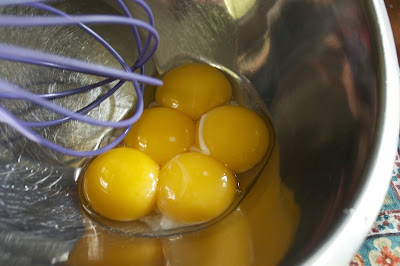 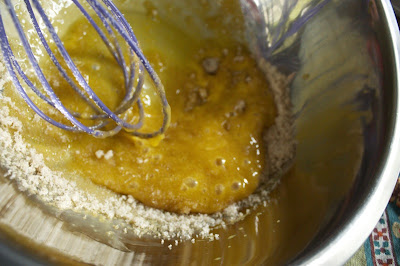 And no, there’s no after shot. Once the eggs and half of the sugar mixture is whisked, set aside.
For the cream mixture I decided it was time to up the fat content of my ice cream. In the past times I’ve made ice cream and gelato, it’s begun to develop freezer crystals quite soon after. Attributing this to the lack of fat content, I decided this time instead of using half and half and whole milk, I was going to jack it up with half and half and whipping cream. 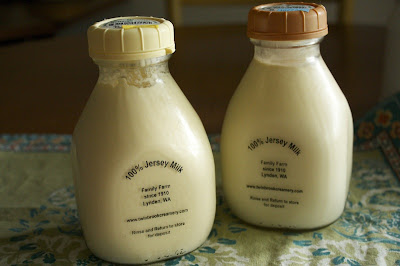 And here is where my Weight Watchers points for the day took a nose dive.
In a medium saucepan, the creams, other sugar, vanilla, pumpkin, and pumpkin pie spice was heated over medium heat until it just began to boil. 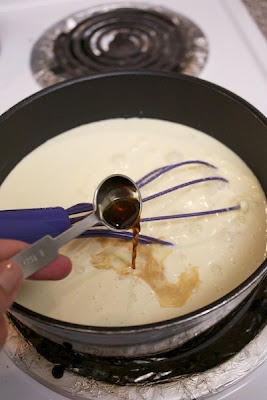 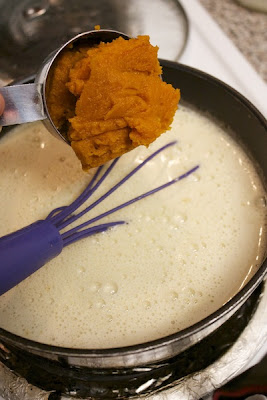 Once it was heated enough to just bubble a couple of times, 1 cup of the cream was removed and used to temper the egg/sugar mixture I’d set aside earlier. This will help bring the eggs up to temperature a bit more gradually than if you just dumped them in there unceremoniously. Over cooked eggs in a custard ice cream is the last thing you want. 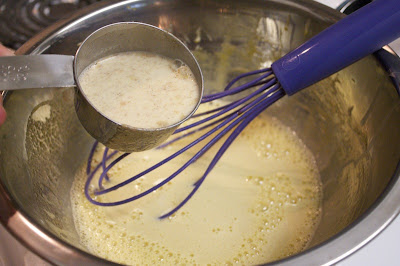 Once the eggs were tempered, they were added into the saucepan with the rest of the ingredients and left to heat up until it had all begun to thicken. The true test that the custard was ready when it coated the back of my spatula. After this, I poured it all into a large mixing bowl and placed it into the fridge to cool off for a couple of hours. You can leave it over night, if you’d like. But who are we kidding, you dipped a spoon into the warm cream and you realize this is something that can’t wait to be made over night! Pish posh!
With a cooled custard and a frozen ice cream bowl, I went to work.
After pouring the cooled custard into the ice cream maker, my patience was feigning and I admit to dipping my spoon into it a time or two. 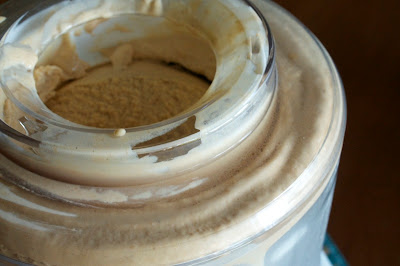 (Whoopsie daisies – it went a little overboard…)
But after 20 minutes it was ready to go. So feel free to serve this immediately, or put it into an air tight container and serve later.
Don’t lie to yourself and say you can wait on this one – it’s so good – you can’t. Just do it. Be bad, I won’t tell.
Now, go get your pumpkin fix on!
PRINTER FRIENDLY RECIPE 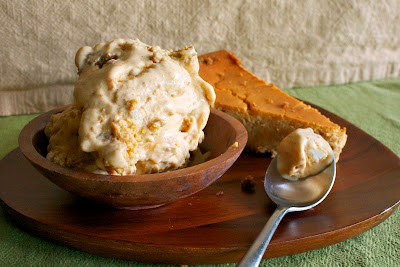