*Editor’s Note* – This PSA was released to coincide with the related blog post below. Caffeine can do some really crazy things to a person. Especially a person who did not eat nearly enough that morning. It was also an experiment into the side effects of caffeine and what a Starbucks Trenta will do to the human body…Be warned that nonsensical ideas may spewed and confuzzlement abound is sprayed amongst the masses for their reading and entertainment…Don’t let this sully your ideas of Megan, “the country cleaver”, she really is a good person…

Side effects of caffeine may include shakes, jitters, lots of cleaning, nap-deprivation, unrelenting shouting at the TV while watching the Kentucky Derby, heightened awareness of craziness in endeavoring into something so absolutely nuts as to consume the equivalent of a Starbucks Trenta on a Saturday afternoon…

A few weeks ago when Starbucks released the info on the Trenta, I was shocked. This could only be something to push the American population over the edge of turning us all into the blubbery messes we saw in Wall-E, minus the hover crafts and jumpsuits. What were they thinking doing this to us? We don’t have any self control, who are we kidding.
But alas, Kirsten from Comfortably Domestic and Kat from Tenaciously Yours went in and decided this was something we collectively MUST try, kinda like that beer bong in college where you already know your lightweight boozing self really can’t do or finish – but it’s a right of passage – you simply must try. Or am I the only person who had that problem?

So three crazy ladies go into a Starbucks and chronicle their adventures into Trenta Oblivion… that sounds like the beginning of a really bad joke.

Today was the day. Starbucks officially released the Trenta to the masses…or so we thought. My original plan was to head to the Mothership – Starbucks at Pike’s Place Market in downtown Seattle – the place it all started. That plan was abruptly stopped due to the opening of boating season and getting to Seattle would have been to difficult with all that traffic bogging down the city. Sorry, I deal with traffic on a daily basis, and I refuse to on the weekend.
And in the end it’s a good thing I woosed out.
Instead, I dragged Ben out of the house to traipse on over to the Starbucks around the corner from our place. After placing my order, the kindly barista informed me that they didn’t carry them yet. Asking her counterpart, we were both informed that they will only be selling Trentas in warm weather climates. Seriously? Seattle started the Starbucks revolution – don’t you think we could get an exception? C’mon.
Now do you see why I’m glad I didn’t waste my time going to the Mothership (30 minute drive each way) to get turned away and denied my Trenta? Le Sigh.
Later, I resolved to go back around the corner and buy two Grandes to supplement the original Trenta I was denied.
And four hours later, I’m still only through one of them. Oi vie. 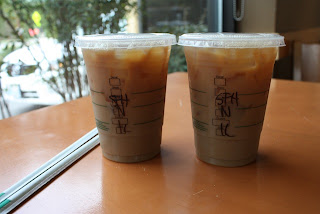 Oh don’t worry, my grande non fat iced coffee with sugar free hazelnut is sitting in the fridge waiting for me to go out tonight, assuring me and my company that I will not face plant into the dinner table later. 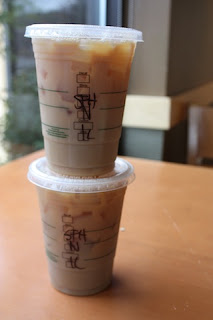 Is it a Trenta yet?
All I can say from this experience thus far – is that I’m glad they are only making the Trenta for iced coffee drinks – Lord only knows how many calories a Trenta Chocolate Chip Frappacino with whip or a Trenta Hazelnut Mocha with whip would be and how many hours you’d have to spend on the treadmill running that goo off.
I’ll pass.
But to put it into true perspective of what our bodies can actually handle, I give you this. Shake your head in shame of what Starbucks is doing to us…and what we do to ourselves. AHHHH!!! 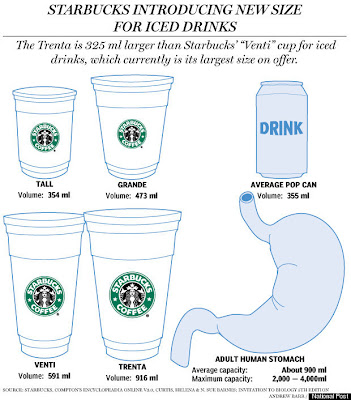 In conclusion, it’s taken all strength and concentration to get this far in the post, I have to get up and burn off some of this caffeine. Back to the Cleaning!! (As I slurp the last remnants of my grande sugar free hazel nut iced coffee)
*Editor’s Final Note* Dang, Megan’s apartment is really clean. That may be the only good thing to come out of this experiment, because the heartburn that ensued long into the night was the equivalent of the battle scene from “300” – epic…
This site contains affiliate links, if you make a purchase through them, we receive a small commission.
Recipes