Home » Recipes » Night at the Firehouse

Night at the Firehouse

by Megan on November 8, 2010 4 comments »
For some girls, they may have a bad hair day. For girls like Kandace and I, we have bad baking days. Last night was one of those bad days in the kitchen. It started out easy enough making a Devil’s Food cake to take the her roommate’s (John) and someday Father in Law’s (Vinny) firehouse. 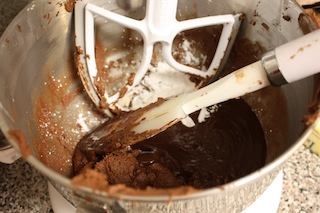 The first frosting – a Bittersweet chocolate frosting, went off without a hitch. Kinda hard to screw that one up. 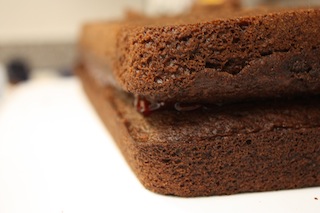 The cake baking and filling went fine as well. 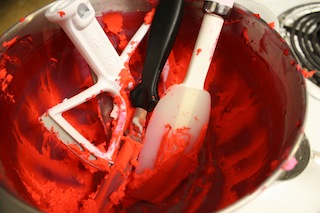 But here is where the wheels fell off the wagon. Dying frosting red is a challenge. I learned in my cake decorating classes that to get a nice red color, it’s best to start with a pink base and then add red coloring to that. A Lot of red food coloring is needed. A lot, a lot, a lot. One 1/2 ounce jar was used up completely.
The color was just right, but after we were over half way done with frosting the cakes we tasted the red frosting and it was Disgusting.
There were a few moments of pure panic when Kandace and I realized we had short of an hour to fix this mess we had created. 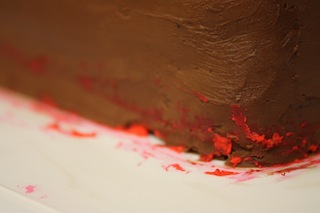 We began scrapping off the gross red and formulating a backup plan. 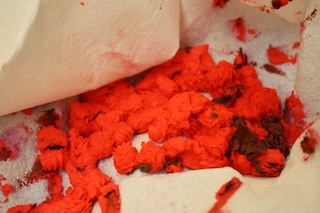 It all went into the trash.
But we salvaged the frosting by whipping up a white amaretto frosting and piping it over the writing we’d scraped off and the borders on both the cakes we made. 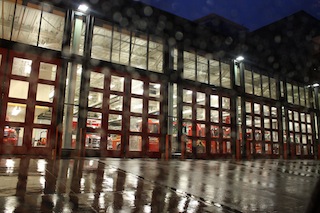 In the end, we made it to the station in time for dinner. Station 10 is one of the newest in Seattle where all the “old farts” work. The youngest guy at the station last night was 36, so this is where the tried and true FF’s are stationed. Dang, is it a gorgeous station. 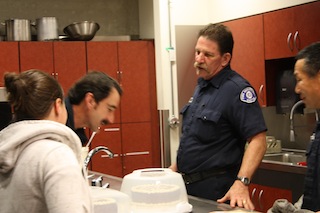 The guys were all impressed with our work, but we opened our own mouthes and told them not too look to closely at all the mistakes we made…We should have kept our mouthes shut. 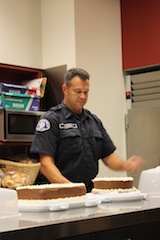 John seemed impressed with the cakes, and nearly dug in right then and there. 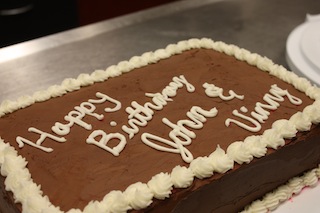 It turned out decently enough. The monolith of a Fire hydrant we were going to construct didn’t work out as we wanted it too. It required power tools, engineering and better planning. So this is what those guys had to settle for. 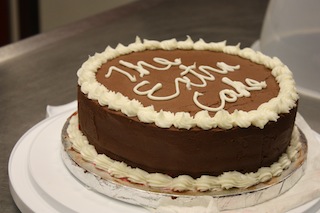 And the “Extra Cake” for all the guys the original cake wouldn’t feed. 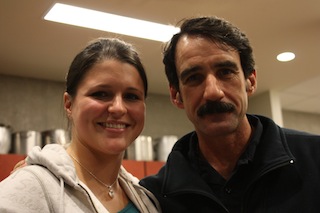 Here’s Kandace and Vinny. Vinny is her boyfriend’s dad. While Matt (her boyfriend) is in Iraq, she’s kept close with his family. 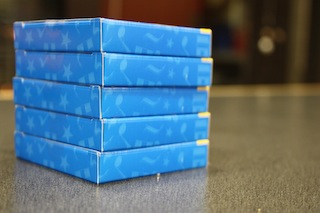 Now, like I mentioned these guys aren’t exactly youngins…At 48 and 49 we needed to add a few candles. They joked that they didn’t have a permit for a fire that big. Suckers. 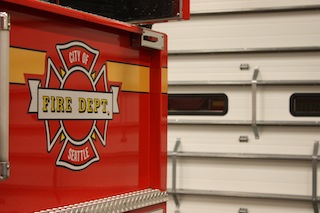 After the delicious dinner we were served and the cake we ate, Vinny gave us a great tour around the station. 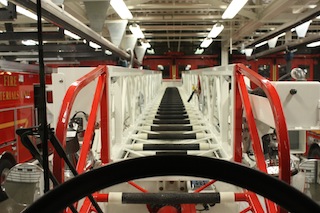 It was like being a kid again, where we got to climb into the truck and look over all we surveyed.
Awesome!!!! Yup, that’s me gorking out in the back of the truck. 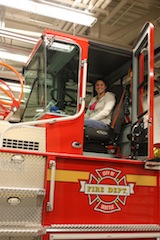 Kandace got a turn too. 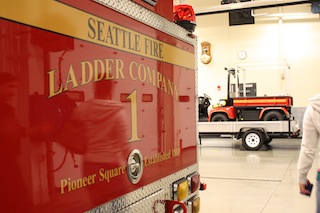 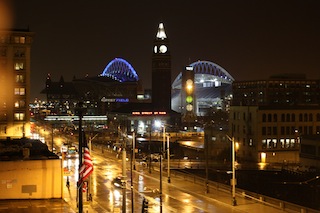 We stayed a couple extra hours to visit with the guys and Vinny, admire the station and the spectacular view they have over downtown Seattle and Qwest Field (home of the Seattle Seahawks). 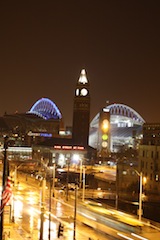 It was so much fun to bake for the guys, we told them they are our new guinea pigs for the forth coming baking experiments. They happily obliged.
This site contains affiliate links, if you make a purchase through them, we receive a small commission.
Recipes

« Previous PostThe Warm n Fuzzy Food Basket Winner Is….
Next Post » In an effort to keep it real….be prepared.

4 comments on “Night at the Firehouse”