Okay, well first things first, I’m back from DC!!! There are things I need to post about the rest of my trip for those intensely curious about my goings on about town – but my after work adventure into dog rescuing is going to take precedent today…

My first day at work was highly productive, reading through all 96 e-mails (which I only got half way through), printing 20 different documents folders, and 15 different submittals. And I’m still not done! By the time work was done and I had to head home to my squishy faced labra-dork Huck, I was stopped dead in my tire tracks over a little Shiba Inu running pinned against the highway sound wall in my opposite direction.  All us nutso’s were flying 60 to 70 down the freeway interchange and I pull over and leap out of my car to run as fast as my short stubby legs would carry me that third of the mile back up the interchange to save this poor little guy! How could I not?

Thankfully, people slowed down and eventually stopped (causing only a momentary backup on a major freeway interchange – whoops). I scooped up the little dude who was hot, terrified and panting his little tongue out of his face. The third mile walk back to the car carrying a thirty pound pup, I was dragging.

He was only wearing a collar with a license, no name or phone number – so there was investigating to be done. Huck met the little dude at the door and they proceeded to tear up my little apartment before I managed to get them leashed up and taken to the offleash park at the apartment. After our tangled mess made it there, I got to my phone calls. And naturally, the dog licesing office being a government agency I was stuck dialing random numbers until I reached the proper line. But – I found them!! And guess what the pups name was?

BooBoo Bear. Yes, BooBoo Bear. Now I can’t judge hoaky names (Huckleberry, really?), but this one was an illfitting name for such a dog. It would lead a normal person to think he is some cute, fluffy adorable, well behaved dog that is owned by a grandmother serving a brick of hard candy, but this little guy had a personality all his own…mainly that being “little man syndrome” where he insisted on asserting what dominance he could over my 80 pound dog. And Boo was persistent, ppppooooorrr Huck. 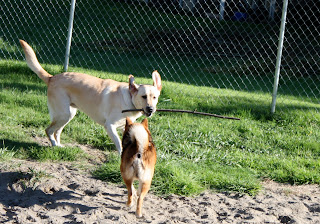 But dispite the dominance assertions they did play and they did tire eachother out. 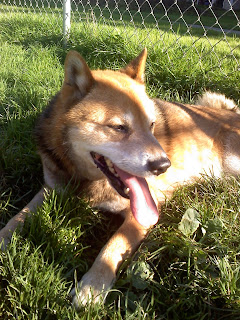 After hunting down Boo’s people the handoff with his family went swimmingly. 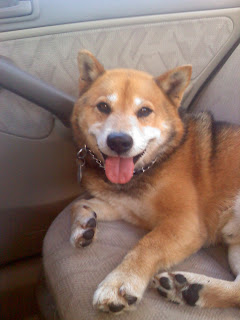 I’m glad the cute little-man-syndromed fuzzy face got to go home with his people. It was nice to have another dog (when he’s not “asserting his dominance” over my own pup), but it’s really best for me to stick with one goobery monster – for now.
Wow, don’t I have good self control?
This site contains affiliate links, if you make a purchase through them, we receive a small commission.
Recipes