Traditionally, I admit – I’m a soup can cracker. But after this recent undeniable success from yet another America’s Test Kitchen recipe, I’m a homemade soup convert. My mom is one who can whip up a savory soup in no time with minimal effort, not me. Grandma can make a sinking matzo ball soup with the best of the Bubbi’s out there. But now the tables have turned, once and for all. 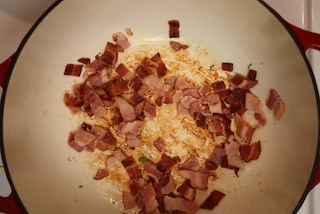 As I previously stated, my lame local grocer didn’t carry proper pancetta, but I figured bacon was a perfect substitute. Not to mention the beauty of just frying the rest of it for snacking on. I’m not above it.
Whipping out my beautiful dutch oven from my hunny, the bacon got chopped and nicely browned. 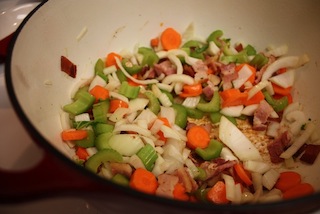 The rest of the veggies got dumped in and softened for about 10 minutes. 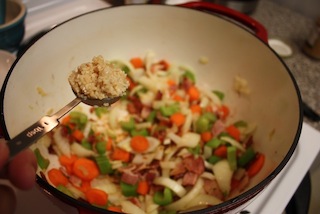 And then…all the garlic got added in. 8 cloves worth of garlic? Edward Cullen will so not be making out with me anytime soon…
After letting all of the flavors mesh for a couple of minutes, the chicken broth, water, bay leaves and beans were added. 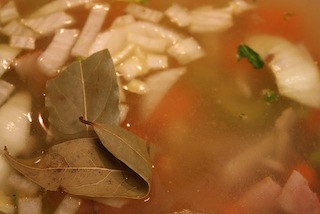 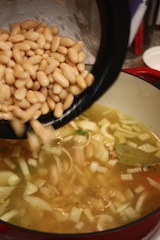 If I would have been able to follow the directions as specified, I would have soaked these bad boys overnight in water, or done a rapid re-saturation with a pot of boiling water and letting them soak in the miniature bean hot-tub for an hour. But such is life.
The other beyond brilliant trick I learned with this recipe was to toss the whole kit and caboodle into the oven to cook. It’s not as crazy as it sounds since the low and slow simmer would cook all of the ingredients together without softening and breaking open the beans. Broken beans, who wants that?!
After an hour in a 250 degree oven, the kale and tomatoes were poured in and placed right back in the oven for an additional 30 minutes. 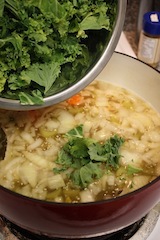 The smell penetrated the entire apartment leaving me with the same gleeking and salivating feeling you feel when a brand new bag of sea salt and vinegar chips are opened. Oh Em Gee, it’s happening again.
At long last, the rosemary was added and left to rest for 15 minutes.
(*sidebar* – don’t forget to remove the rosemary and bay leaves after this 15 minutes is up.) 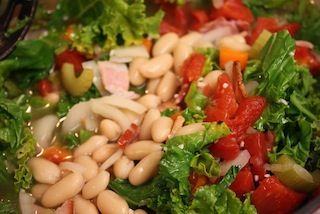 The colors of this were absolutely beautiful. I don’t care if it’s mid-summer and not an appropriate time for soup. I felt like a rebel and it was so worth it. 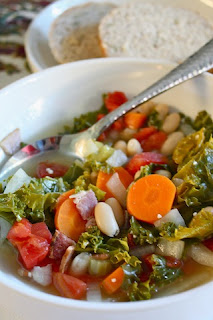 This was another unequalled kitchen success thanks to america’s Test Kitchen. What would I do without ’em?
This site contains affiliate links, if you make a purchase through them, we receive a small commission.
Recipes

« Previous PostGarlic and Chive Hummus
Next Post » 4th of July

7 comments on “Mo’ Soup For You – Tuscan Bean Soup”