by Megan on September 17, 2011 26 comments »
This recipe is a mouth full in every sense of the word. Earlier in the week, my attempts at a Maple Bacon cupcake were a complete and utter failure.
It happens every once in a while. 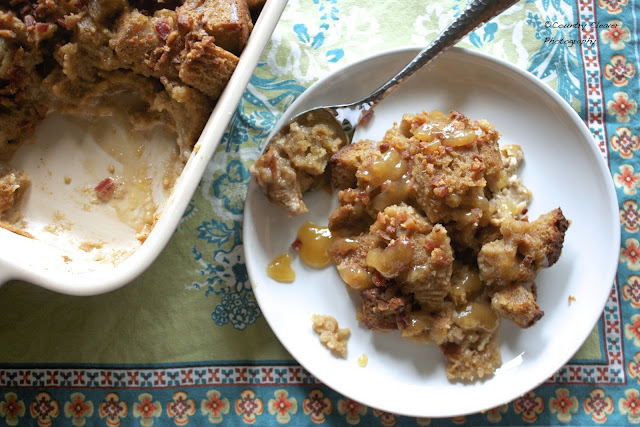 But instead of letting this failure get the better of me, I wanted to turn it into a win. What was created yesterday is the epitome of what Charlie Sheen would call winning.
The original recipe I was going to use was based off of a Chocolate Mint cupcake I found on Tasty Kitchen over a year ago. The cupcakes, by ManicMother, were sinfully scrumptious and tasted liked a moist boxed mix cake minus the aire or after taste of chemicals and sad. Now, I’m not knocking a boxed mix, they’re simplistic and there’s a reason they’re so popular – they do taste good. But when you want the real deal, you make it yourself. Smugness is an added benefit of making everything from scratch.
Instead of making these cupcakes in chocolate flavor, I wanted to ditch the chocolate and add a hint of maple and lots of bacon to them. Where the wheels came off the wagon in my adaptation was that I forgot to compensate for the chocolate’s moisture absorbing capabilities and the batter was more running than it normally would have been. In the original recipe, the batter is pretty runny – so it didn’t occur to me at the time that my lack of chocolate powder would effect it nearly as much as it actually did. Way to go genius. *Palm to face moment*
Immediately after the cupcakes came out of the oven they fell – absolutely flat. How disheartening is was. They tasted like a Saturday morning breakfast in cupcake form, but I wasn’t about to frost the failure and give them away. Instead, I unwrapped them and allowed them to stale in the air a bit just like a good bread pudding should.
For the bread pudding redemption include,
~ 1 cup Half and Half
~ 1 cup Milk (not shown)
~ 1 tsp Vanilla Extract
~ 1 tsp Maple Flavoring
~ 1/4 tsp Cinnamon
~ 3 slices of bacon chopped finely
~ 2 eggs
~ 1 batch of “Failure Maple Bacon Cupcakes” 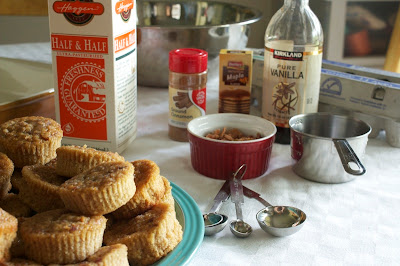 In a medium bowl I whisked together the half and half, milk, extracts, eggs, and cinnamon. 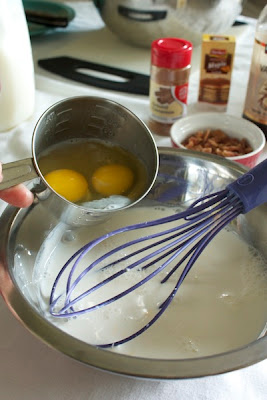 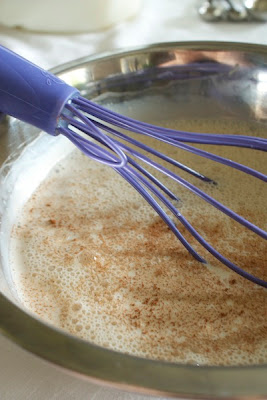 After it was whisked into foamy submission, I took the cupcakes and quartered them. Since they weren’t stale enough, even after being left out over night I put the quartered pieces onto a baking sheet and put them into a 200 degree oven for 20 minutes to give them a little bit of a crust.
In a large bowl the stale cupcakes were dumped into a large bowl and the whisked egg/cream mixture was poured right over the top and both were folded together until the mixture was nearly absorbed. 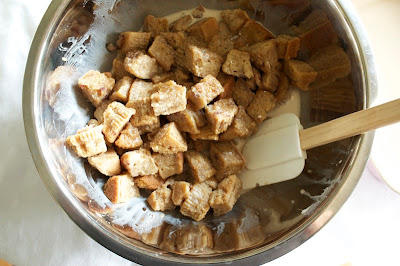 After that was complete, I put the whole kit and caboodle in a 9×9 baking dish that had been smeared with some butter. It makes everything better, why lie. Over the top the minced bacon was added and tossed into a 350 degree oven for 30 minutes. 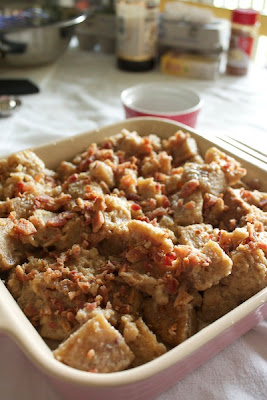 While it was baking away and saturating my apartment with ridiculous smells that were causing me to gain weight at the mere intake of them, I went about creating a sauce of the puddings. Everything is better with sauce, am I right? Yeah, I thought so.
With 1/4 cup of butter, 1/2 cup of sugar, 1 egg, and 1/4 cup of Bailey’s Irish Cream, whisked together in a small sauce pan over medium heat – the sauce was ready to go. I could have just eaten that with a spoon. But I showed great restraint and left it for the bread pudding.
Once it was out of the oven and slightly cooled (and by slightly cooled, I mean wasn’t going to blister my mouth) I sliced out a slab, poured over some sauce, died and went to heaven.
The moral of the story is – don’t let a baking failure get you down. There is always a way to remedy a bad baking situation. If nothing else, turn it into bread pudding. It’s an automatic win.
Printer Friend Recipes:
Maple Bacon Cupcakes (fixed so they’ll actually turn out right)
Irish Cream Butter Sauce
Maple Bacon Cupcake Bread Pudding

« Previous PostThe Palouse: A Photographic Perspective
Next Post » Beef and Cheese Pupper Treats and a GIVEAWAY!