by Megan on August 16, 2011 7 comments »
It’s that time of year with fresh produce abound. But what can you do when it’s all said and done? You can’t let all the freshness go to waste, it’s time to can! Or in this case, pickle.
This is the second year that I’ve made pickles, last year adventuring into bread and butters and garlic dills. Since they were such a glowing success last year, with all but three jars going to my coworkers and friends – it had to be repeated.
If you haven’t canned or pickled before, it really isn’t as daunting as it would first appear. But there are key steps that make or break your canning success.
First is washing your produce. Who knows what else lurks in the cucumber’s nooks and crannies?
After cleaning and scrubbing out my sink, I poured all of the beautiful, firm and delicious picking cukes into the sink and scrubbed scrubbed scrubbed with a veggie brush. 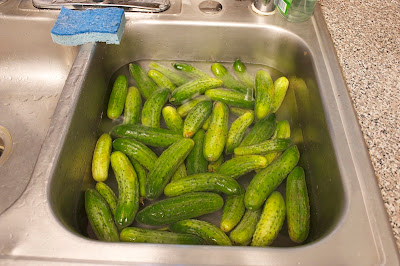 Like I said, this is a vital step. Imagine all of that grossness going into your jars. I’ll pass. 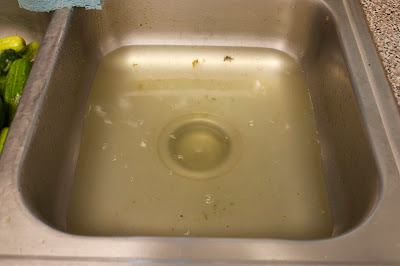 Next is the laborious task of slicing up all of them into 1/3″ slices. No need to be exact, but a ballpark 1/3″ is perfect. 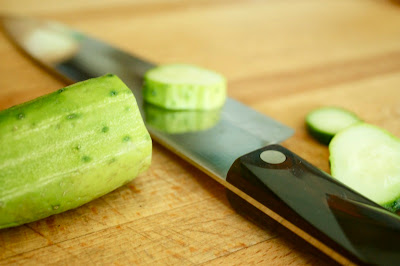 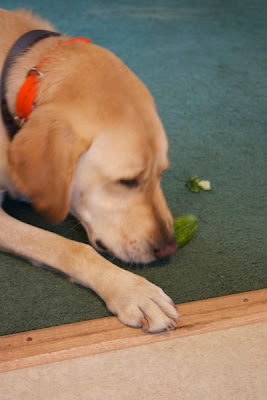 (If you’re feeling generous, toss a cucumber your pup’s way. He’ll appreciate it.)
For good measure I sliced up an onion or two to be added into my jars. Good thing I wasn’t wearing any make up or else I would have been a raccoon by the end with watering eyes and smeared mascara. 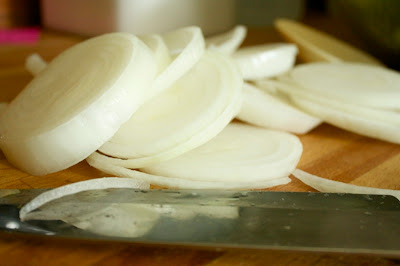 After both of these time consuming steps were done, I got to the brine of my pickles. I’m the first to admit when there is the chance for a shortcut – I take it. And this may be a sacrilegious step – but in the interest of full disclosure, I’m going to tell you anyway.
I used a packaged pre-made brine mix. Yes. I said it. *winces and prepares for loss in canning credibility*
Last year my dad picked me up a few packages of Mrs. Wages bread and butter pickling mix that was on clearance in the bin at the local grocery. It was worth a shot at 50 cents a pop. How bad could it be?
Well, let me tell you! Mrs. Wages is now the pickling package of choice in our household.
My first ever batches of pickles were crispity, and crunchy – better than even a, dare I say it, Vlasic.
And like I said, convenience and taste are key. Winner.
The package called for 7 cups of sugar. There is a reason bread and butter pickles are not South Beach diet friendly…this is it. But dang, thei are iz tastiez. (Sorry, had to throw in a little LOLCat reference) 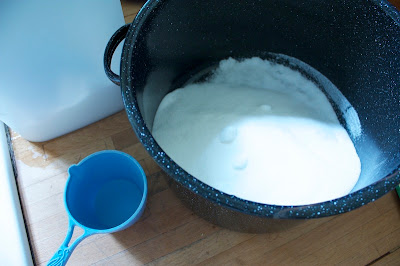 Combine the sugar, 6 3/4 cup of vinegar and the seasoning packet all together in a large non-reactive pot and you’re cookin’. Get it? Yeah, you get it.
In a very large (and tall) stock pot or canner, bring your cleaned jars to a boil. Multi-tastking is what this is called. This boiling will sanitize your (already washed) jars and prep them so they are heated and create an even and firm seal when they are processed. 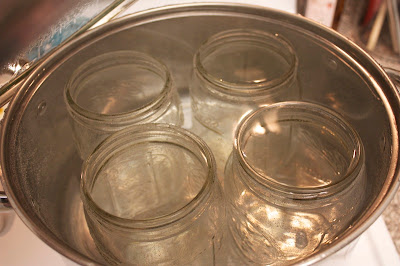 After the water bath they were in reached a boil, I picked them out of the water, and pouring that water into the sink. Don’t pour it back into the pot, because when you place your already filled jar back into the water bath it will displace all the water you added and overflow. Unless you like a wet stovetop and saturated floor that is. 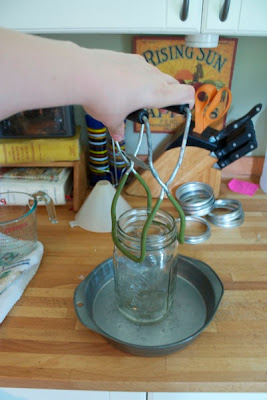 A handy thing to do was to place a pie pan under each jar, so that any overspill would go right into the pan not onto the countertop. Brilliant, no? 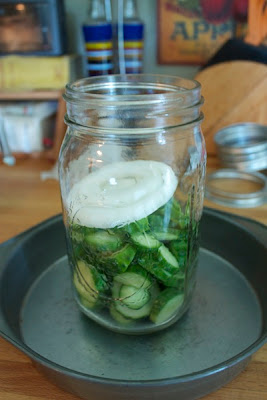 To each hot jar, I filled it about half way with sliced cukes, one slice of pickle and topped it with cukes again. Easy.
But make sure that you tamp down the pickles and cram them in there as tight as they will go.
With about 1/2″ of space remaining at the top, I filled the jar with pickling juice that was boiling over the stove. The cucumbers will try and float, but make sure you have about a 1/4″ of space at the top of the jar. 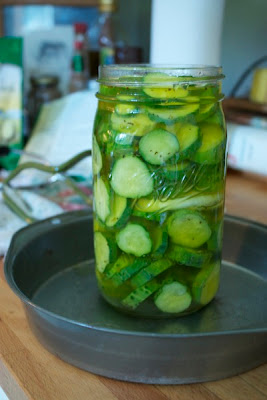 Take a lid out of simmering water, place it on the top and secure it with a ring. Hurriedly repeat the process until all of the jars in your stockpot or canner are filled. 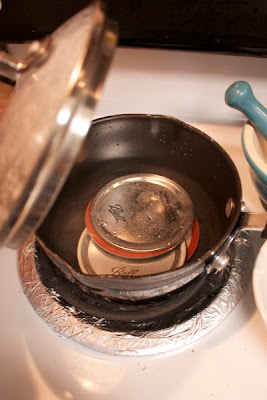 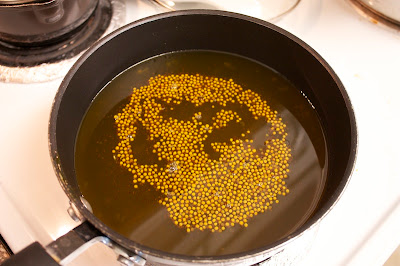 After all are packed, put them back into the water bath, turn it up and let them boil and process for 10 minutes. Easy peasy.
A bit labor intensive perhaps, but there is nothing like a homemade pickle.
The hardest part is letting them sit for a couple of weeks to do their business. But oh so worth it in the end.
Go get some cucumbers and jars, now! Right now!!
This site contains affiliate links, if you make a purchase through them, we receive a small commission.
Recipes

7 comments on “I’m Craving Pickles…and No, I’m Not Pregnant”