How To Tuesday – How to Season a Cast Iron Pan

We’re having a Come to Your Higher Power Moment over cookware here people. It’s time.

When was the last time you got a new set of cookware? Or a new pan at all? Odds are, it’s time to replace the scratched up non-stick pans you have. You know the ones I’m talking about…the ones your husband took a fork to that left gouges in the bottom, or the ones you used your metal cooking tongs on stir frying last week’s dinner and now you’re wondering if those little black flecks on your dinner were the pepper you added in or pieces of Teflon…oh wait, you didn’t add pepper to last week’s dinner.

See what I mean?

When Ben and I got married, we opted to nix all of the old non-stick stuff we had in the house and go the way of stainless steel and cast iron. Okay, there is one remaining non-stick pan that I keep around solely for my occasional scrambled eggs, but other than that – it’s all SS and CI. The versatility of the SS and CI is far and above that of non-stick anyway – since you can use it on the stove and in the oven! It was by far the best decision we’ve made in cookware.

Cast Iron has supreme heat retention and heat distribution compared to many of it’s cheaper non-stick counterparts. You food will sear beautifully, your foods will cook more evenly. Along with the versatility of Cast Iron, it actually has added health benefits too! Say it ain’t so?! Yes, it’s true. While cooking with cast iron, you can actually gleen extra iron into your diet, which is a good thing!

So if cooking with cast iron is something you want to transition to – there are a few steps to make sure your skillets are in good working order for years to come. Now, you can bust out grandma’s old skillets and let her memory live on in the food you create.

Step One – Get yourself a Cast Iron Pan. Ben and I use Lodge Cast Iron. We have two enameled 6 quart dutch ovens and two cast iron skillets in 10″ and 12″. We also have a Le Creuset enameled braiser that is a dream. 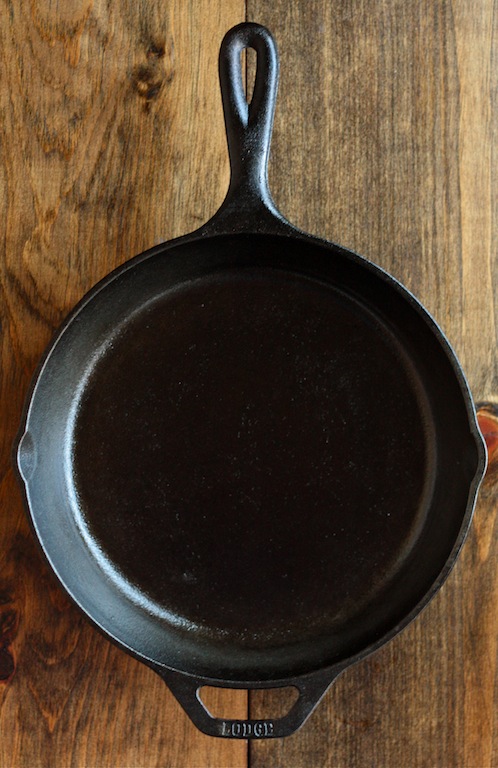 Step Two – Cook in it! Want to season it fast? Cook up some bacon! Lots and lots of bacon.

Step Three – Wash pan out with hot water and scrub brush.  And yes, a little bit of soap. This can be very controversial, even within my own family! I recommend scrubbing it with a bristled brush, and a scrapper first to remove the large stuck on bits of food. Then if you still have oil that is lingering, use some soap and a sponge to wash it away. You won’t remove all the seasoning, but you don’t want your pan swimming in oil either. 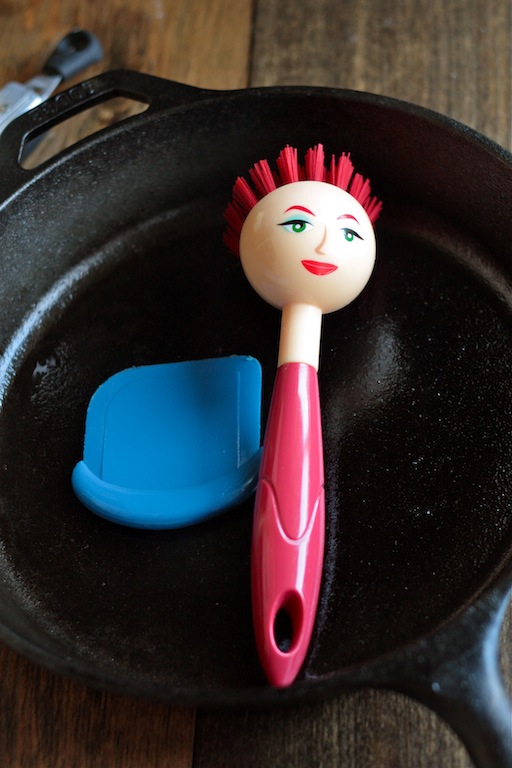 Step Four Part Two – If you do have rust accumulation, take a brillo pad to the affected areas and scrape it away until you no longer see any rust spots. Rinse it off and dry immediately.

Step Five – Place your cast iron back onto your stove and heat it up to medium heat. Pour in about 1- 1 1/2 teaspoons of high smoke point oil into the bottom of the heated pan. Take a wad of paper towels and some tongs and wipe the oil all around the cooking surfaces of the pan so it’s evenly coated.

Step Six – Turn off the heat and let the pan come back down to room temperature. I also recommend using another wad of clean paper towels to wipe out any excess oil that is still present after the pan cools. You want a very light coat in the pan, no pools.

Now you’re ready to cook again! The few extra steps are totally worth it for pans that will last a lifetime.

How to Make Chicken Stock

How to Poach an Egg

How to Infuse Olive Oil

How to Make Chocolate Magic Shell

How to Brown Butter

How to Make Compound Butter

How to Roast Garlic

This site contains affiliate links, if you make a purchase through them, we receive a small commission.
Cast Iron How-To