Seattle’s equivalent of Groundhog’s Day is when the Copper River Salmon fly into town. Except our salmon don’t see their shadows and there is no more 6-weeks of winter…well, that’s debatable – because it was freezing cold at 4am.

Press, media, tv reporters, local celebrities and food geeks (like me) flock to the tarmac of SeaTac air port at 5 am to watch that combi-plane fly into the Lower 48 and see the captain saunter out of the plane and hoist a 50+ pound fish over his head, praying like all saints that he isn’t going to drop it or throw his back out in the process. 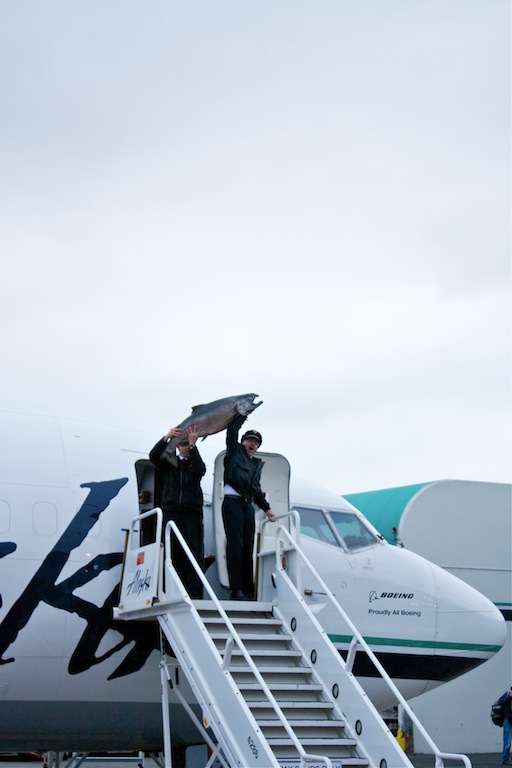 It’s a rite of passage and a tradition seafood and salmon lovers hold dear. 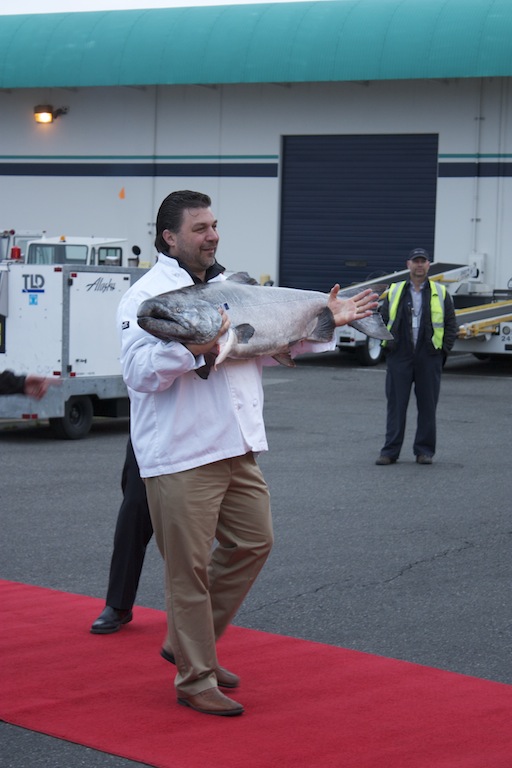 And I maintain that Seattle will be the only place you see that salmon get the red carpet treatment.

This year, I was lucky enough to be invited by the people of Copper River Salmon to take part in their Fresh Catch Crew, a group of 12 food bloggers from around the country keeping you all up to date on the goings-on of the CRS season and fixing up some tasty treats along the way.

Every year of this cook off, three local well known chefs get together to compete in the winner take all, no holds bard salmon throwdown. This year’s chef selection came by way of Crush, Ray’s Boathouse and Anthony’s Homeport‘s three executive chef all mastering various types of cuisine. 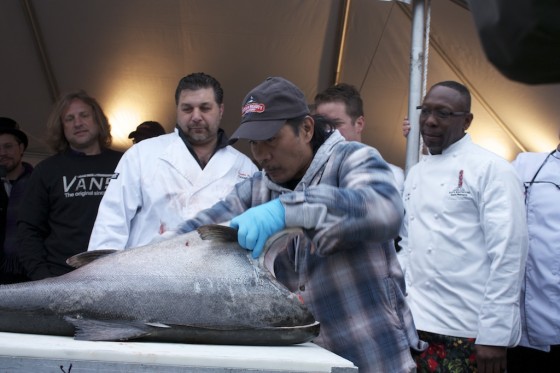 Once the necessary photographs were taken, it was all down to business and the 55 pound beast was masterfully filleted, deboned, and sliced to the specs of each chef. I’ve never seen a knife go through a beast like that. Like buttahhh.

And after having a little taste of it straight from the fish, sashimi style – I. died. happily. 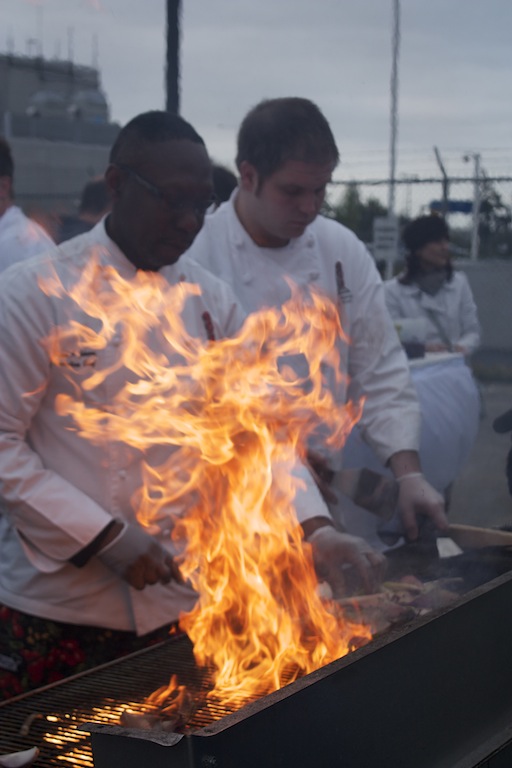 Each chef went to work on their creations, implementing all various means of heat to cook their fishes. We had grills, torches, a Big Green Egg (my personal fave of the cooking varietals) and pans. Flames were rising, smells were wafting and at 6:30 in the morning, salmon was smelling Ah-maayy-zzzingg!! 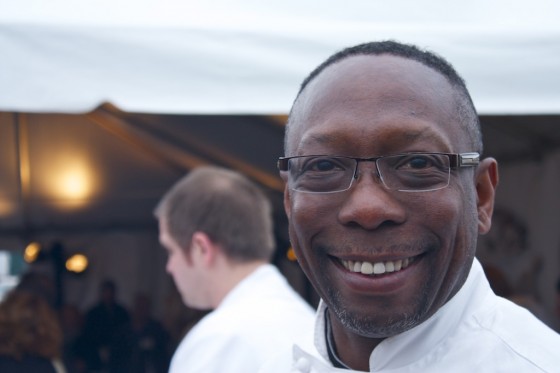 Even with two mugs of coffee I couldn’t force a smile as big as Chef Wayne’s. Good man. 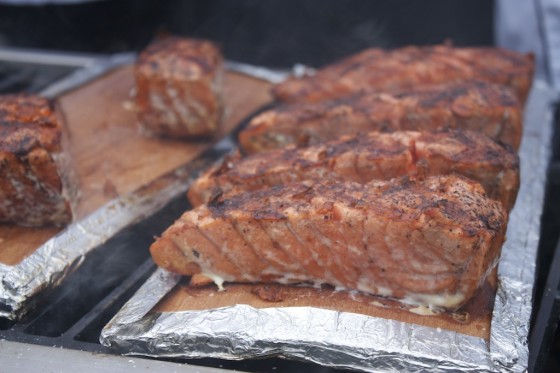 Chef Pat Donahue of Anthony’s started his salmon off on the grill to sear the outsides, then finished it all on soaked cedar planks. Classic, unadulterated and divine. No muss, no fuss. The seasoning was impeccable with a little bit of cocoa that just nailed the whole dish.

When asked what the biggest mistake people make in cooking salmon is – the consensus, across the board was – over cooking your salmon.

Medium-rare to medium is the highest you should cook it. That’s it? Well, I have some serious adjusting to do, but I’m equal to the task.

The winning dish. Let me just tell you that rhubarb angels painted this plate in deliciousness, cocoa kissed the salmon and one bite of this left me furiously happy. Furiously.

It took all my will power to not snatch one of the left-over tasting plates from the judges. 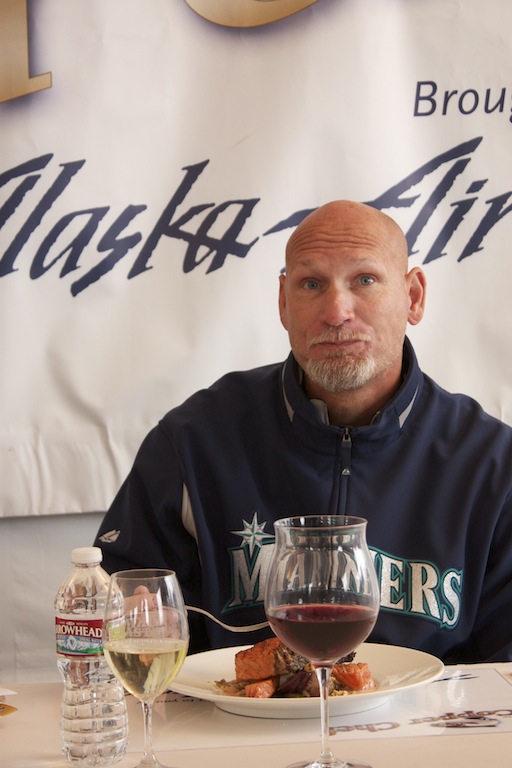 You wanna know what goes good with salmon and a variety of wines in front of you? 7 am.

Goes great with both. Just sayin’.

In the end, this dish – from Pat Donahue of Anthony’s (pictured above) took the top prize, making it a third year in a row he’s taken the top prize. Overachiever.

The whole morning was an absolute delight, the people were amazing, the food was divine. And after a 2am alarm, I went home to sleep it all off. Now – to get my hands on some salmon….

*Fine Print* I was selected by the fine people of CRS to participate in a summer long campaign to promote this fabulous fish. I have not been moniarily compensated for this post, just given the chance to see a Seattle tradition in person.