Kandace and I had an assignment this last week, one that I am only now rested up enough for to type about. Whew was it a time consuming but throughly exciting project.

About a month ago one of my oldest friends gave me a call asking if I would mind making a cake for her Mom’s upcoming birthday party. Well, of course I jumped at the chance! I’ve known Britt and Peggy since I was in 5th grade – so roughly 15 years!

The request for cake was simple enough, a carrot cake with cream cheese icing. But for someone you’ve known for so long – you have to do something special to set it apart. This is where the decorating comes in.  For the recipe I decided on America’s Test Kitchen Carrot Cake recipe. And for the cream cheese frosting, I used their recipe as well since it had a couple little differences that made all the difference in the world. Sour cream, hello?!

Well, the caking started on Friday night with a LOT of carrot shredding. Bless that little food processor Ben’s mama gave me last year for Xmas. It might not be a full-size one, but it saved Kandace’s fingers from sharp knives and our time and sanity. Whew! 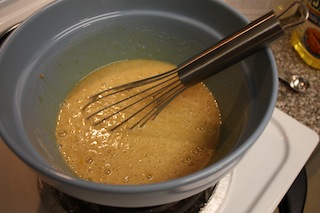 It began with mixing all of the sugars and 8 eggs together for a double batch of this. 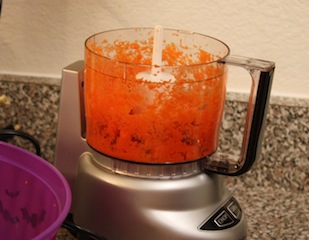 Look at this little champ, he rocked. 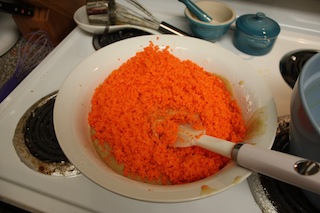 This is only two pounds of carrots, one pound for each cake. We doubled it. There was a lot of orange floatin’ around. 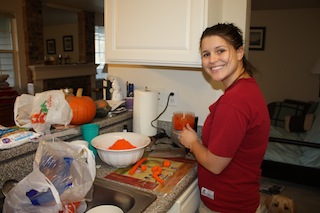 Kandace was a champ taking on this task. It’s a good thing we have such complimentary skills, me with the baking and her with the construction aspect of all of this. That way – we get something awesome looking the also tastes just as wonderful. Win! 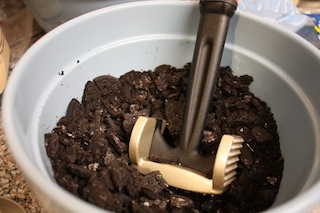 We crushed up a package of Oreo cookies for the finishing touches on the cake. There might have been a few that missed the bowl…and ended up in my belly. What? They’re Oreos, c’mon! 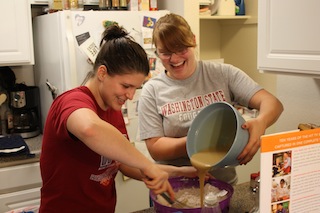 In between Saturday college football games, Ben managed to get a few pictures of us in. What a guy! 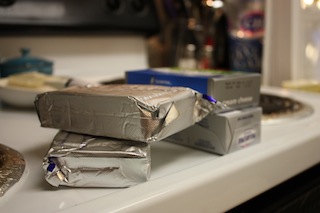 And here is that full octane cream cheese. None of that wussy reduced fat stuff here. 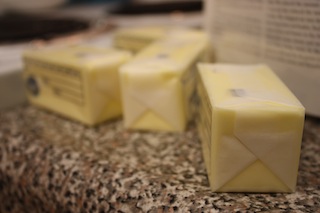 Not to mention all the butter, yeah I went there too. 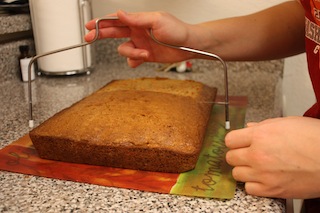 After the cakes were baked they needed to be properly leveled for the final design. It wouldn’t have looked nearly as great all domed up and lumpy. This leveler was the 3 bucks I’ve spent on baking stuff. 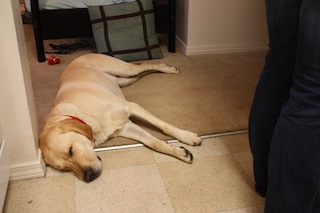 Huck as always was a trusty sidekick. He guarded the floor protecting it from falling remnants of carrots, except for when he was doing this…sleeping. 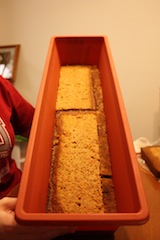 Here is where the construction started to all come together. The cake had to be easily transportable and adorable. A plastic terra cotta planter box worked wonders. 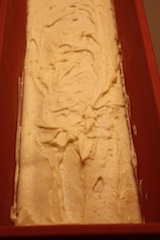 After the first layer of cake in the pot we dolloped a nice layer of frosting over it to prep for the second layer. 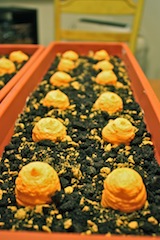 When that was all done, another layer of frosting was added along with the crushed Oreo and graham crackers for the topping. And what better to have in a carrot cake, but carrots?!
They may be frosting carrots, but hey they’re carrots none the less. 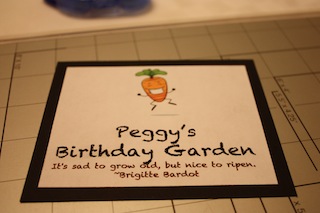 For any self respecting garden you have to have a marker to tell what’s in there. So we printed up a quick little sign to commemorate Peggy’s Birthday Garden. 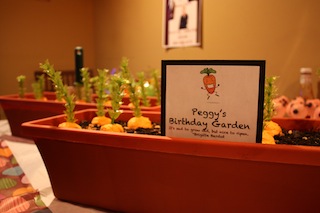 And here is is. Two total cakes, with each carrot having an aquarium grass stem. Kandace had the idea to use a trowel as a serving device. Seemed to work pretty well. 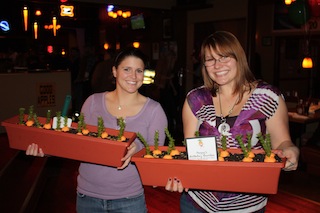 Proud cake bakers are we.  It was a big hit and we couldn’t have been more excited to be apart of Peggy’s big birthday bash. 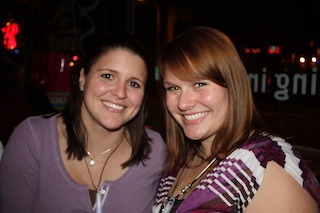