The last time I attempted making blackberry Grand Marnier jam, it didn’t turn out as well as I had hoped. Not enough of the Grand Marnier, too thick and it broke bread any time you attempted to spread it. It was tasty, just not “right’ by jam standards.

After some research I concluded that the initial attempt failed because of the addition of the booze with the directed amount of sugar! How did I not see it before? My years of high school chemistry, two semesters in college and nights of being a typical 20-something college kid apparently didn’t alert me to the fact that alcohol is Sugar! Duh…

This time around, with my Ball Complete Canning Guide in hand, I set to work to create jam perfection. 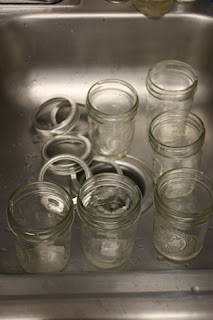 I started out getting all pruny doing the necessary washing, rinsing and sanitizing of the jars. Next, to the fruit! 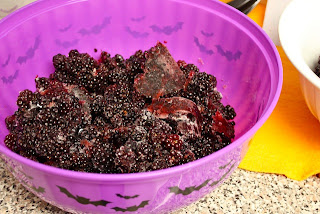 I started out with 6 1/2 cups of frozen berries from my haul last summer. Deciding it was probably not wise to do a full-on traditional jam full of seeds and skins, I opted to strain the berries first. I don’t want to be the cause of someone losing a filling over the seeds in my jam. 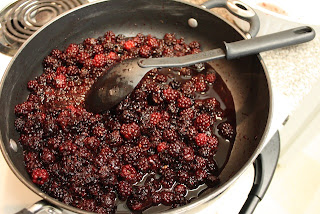 Since these bad boys had been frozen since late last summer, the unthawing processes needed to be expedited – my impatience was growing. 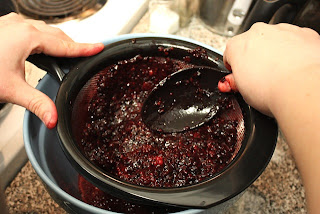 Then the separating commenced. Oi vie, was it a tiring project for my poor wobbly arms. My workout was killer this morning, leaving me with noodles for arms. Sara, my bestie from Boise acted as my imaginary personal trainer. Imagining Sara/Jillian Michaels yelling at me for an hour pushed me to get the best workout I’d had in weeks. My love and hate for her are in equal proportions at this moment, ouchie. 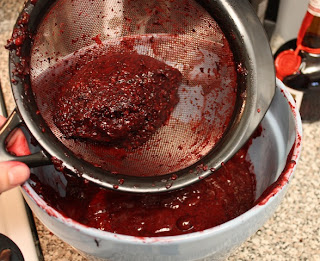 After all of the endless scraping, this is what the berries were reduced too. 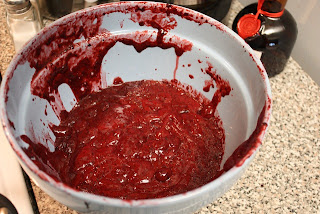 This was plenty of juice and goo for the jam. 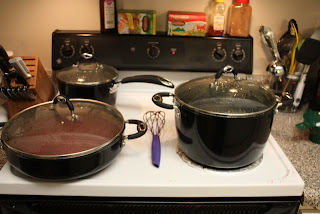 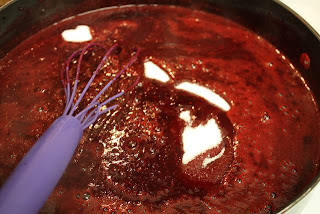 With the addition of 6 cups of sugar and 3/4 cups of Grand Marnier, I was off to the races.
Last time this recipe was attempted, I used about a half cup of booze and the full 7 cups of sugar it required, leaving me with a sticky mess that tasted good but was the consistency of paste, no bueno.
After the jar heating, jar filling and filled jar boiling was complete they came out of the bath ready to finish their sealing, popping away and making me smile each time. With each little “Pop”, it signaled success. 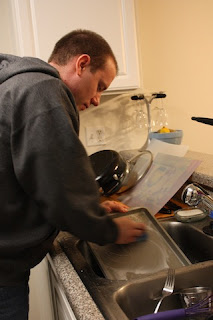 Ben so kindly helped me with the mess I had made… 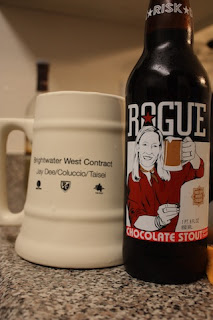 , then poured himself a beer. (He took this picture. A new beer for him for all of his hard work)
The jars are still cooling away, but don’t worry I will keep you posted on the results. Oh, how I am drooling already.
~Megan
Printable Recipe Here!
This site contains affiliate links, if you make a purchase through them, we receive a small commission.
Recipes

« Previous PostWorld Market is the New Target
Next Post » Two Labra-dorks Go to the Park….