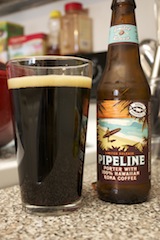 I‘m sure you have read about the not so glamorous experiences of Megan and I moving in together.  The refrigerator organization fiasco comes to mind… Oh, and fyi, it’s still a mess.  Anyway, when Megan and I sat down this weekend to figure out the dinner menu for the week, pork shoulder was on top of the list.  It’s not a meal you can just pop in the microwave for five minutes and call it good, so Meg asked me to get things started when I got home from class.  No big deal, right?  Well, after receiving a few clarifying instructions from my hunny on the phone about the prep, she said to me, “Oh, by the way, take some pictures because you are writing a guest post on the blog tonight.”  Wait just a minute… How did I get roped in to this?  There was no getting out of it now.  So, going back to the refrigerator organization problem, I thought I would start by making some room, and getting rid of a beer. 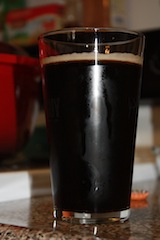 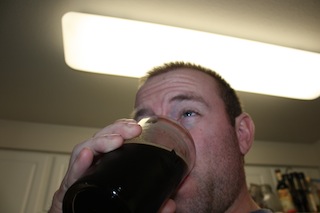 Ok, now to actually do some cooking…  I took the beast out of the fridge and let it sit at room temp for about an hour.  My sister, who is a culinary genius, learned me up good that letting meat warm up about an hour prior to cooking allows it to be cooked evenly.  In my experience, it works great! 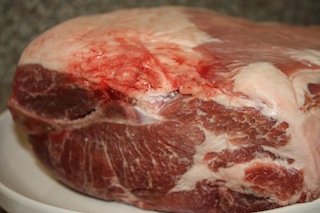 After preheating the cast iron, I added 4 Tbsp of canola oil to the pan and let it heat up for a minute or two. 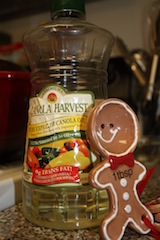 …And in goes the pig. 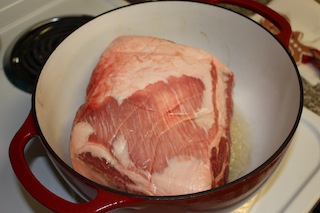 At this point, I had only gone through about half a beer.  Just in case you were wondering… 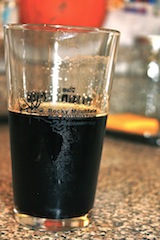 So, the idea here was to sear the meat before slow-cooking it.  Don’t ask me why, I just do what I’m told. 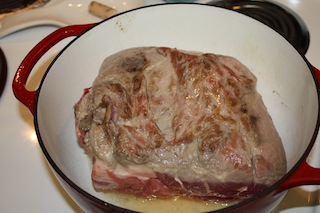 Trying to sear the narrow sides of the roast is quite difficult, so I came up with an apparatus to hold it upright.  It worked out that on medium heat, it took about two minutes to sear one side. 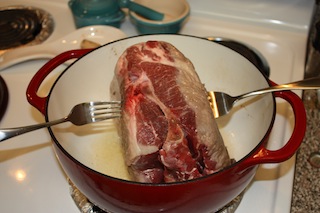 While the meat was doing it’s thing, I put a tablespoon of caraway seeds in the modal and pestle and gave them a bit of a grind.  You don’t want powder, you just want to release the aroma of the seeds.  You’ll know when you get there. 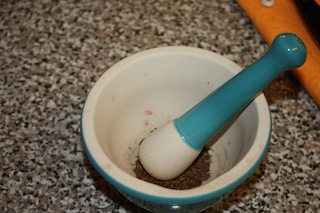 Also, I sliced up an onion.  Nothing fancy here… Just 1/4 inch slices to place on top of the roast. 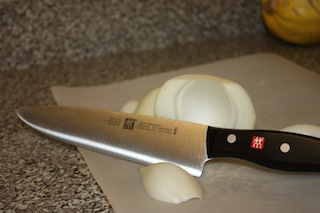 Once seared, I dispersed the caraway seeds evenly over the roast. 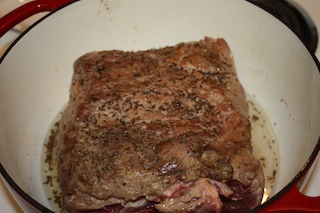 In go the onions. 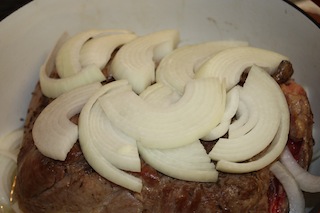 And you’re done!  Well, for a while at least.  I added a cup of water to the pan, turned the heat down to medium low, put the lid on, and let it cook for five hours.  Easy right?  I didn’t even finish my beer before I was done.  I’d say it took less than half an hour for the prep… 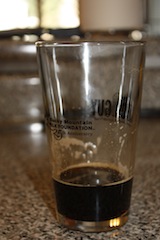 …but I did have some help. 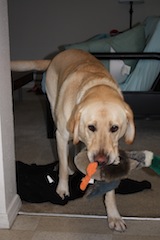 i bringz u the duk ben… 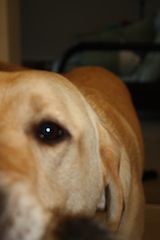 no? u wantz da bankie instedz? 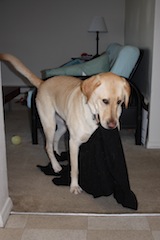 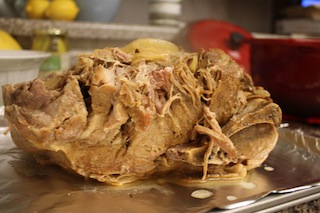 The meat should fall off the bone.  I used a fork to help matters a little bit… 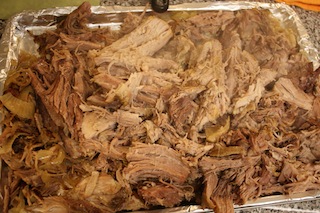 When the meat was pulled, the pan was put in the oven and broiled for a few minutes or just long enough to slightly crisp the outside. 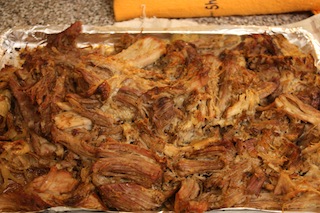 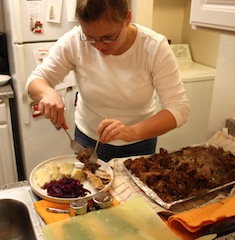 Megan was nice enough to make Czech dumplings and shredded red cabbage to round out the meal.  We didn’t get any veggies in here, but one can splurge once in a while, right? 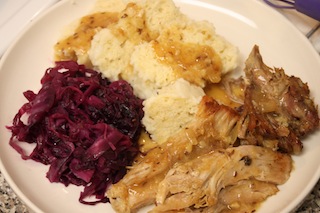 We both agree that it was a great meal, especially for a Monday night.  With plenty of left overs, we will be eating well for days.  However, tomorrow night I’ll be steaming some veggies, too 🙂