My average is starting to work it’s way up!

It may not be a Friday, and only a few days closer to the Royal Wedding, but I had to share this with you all in hopes of redeeming myself and my culinary escapades. Now trust me this is NOT something difficult to make, unless opening a can is difficult for you. It really is that easy.

Now, if you’re like me and eat up anything having to do with the royal couple, you may have heard Miss Middleton’s favorite breakfast is beans on toast. Pretty sure the first time I read that, my eyes stopped right in their tracks and the thought of beans on toast took an extra moment to process. Straight beans? A bean paste? Is is beans sweetened in some fashion and mushed together? And what kind of beans for heaven’s sake could ever be put on toast and be considered edible?

So I had a mission – ask my former boss who’s English, “what’s the deal with beans on toast? It boggles my mind”. A 5 minute diatribe commenced on how it was simply amazing, drool worthy and utterly English. It got compared to somewhere between baked beans and tomato soup. There were marbles rattling around in my head again. Still not seeing it.

Straight away I headed to the English bakery in Redmond, a couple towns south of me where I picked up the required teal can of Heinz beans, ready to make this and really put it’s taste to the test. Skepticism was brimming over….but I pressed on. 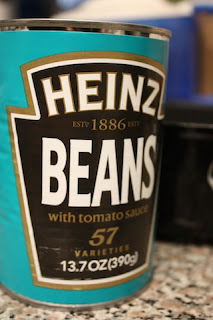 Here is said beans. Yup – teal can, beans and tomato soup-esque sauce.
The only other equivalent I could come up with, was Spaghetti-Os with beans instead of pasta. 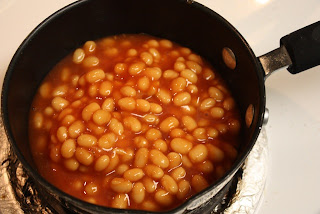 After dumping them into the pan, heating them properly, 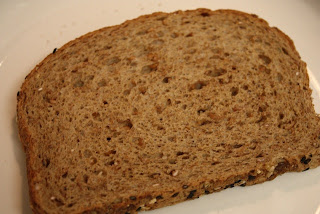 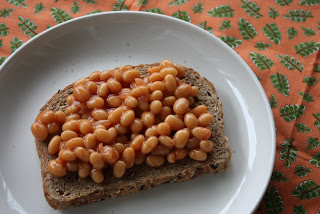 And ended up revealing in it’s deliciousness.
This isn’t something a typical American would probably appreciate for a regular breakfast food, but if you needed something quick for a hearty snack, or fast dinner – this might be right up your ally!
Either way – I’m just glad it all worked out. My batting average is up and I’m set to eat until lunch. Yum!
Don’t judge – just try it. Would I (or my British Boss) steer you wrong?
This site contains affiliate links, if you make a purchase through them, we receive a small commission.
Recipes