Home » Recipes » This is the Beginning of a Beautiful Friendship

This is the Beginning of a Beautiful Friendship

If you like the classics at all, you’d be able to name that movie.

Today I visited a woman who also works for my company, who owns a hobby farm outside the town. As it turns out she has a Paint named Bugsy who is in need of some exercise – and I personally couldn’t think of someone better than myself to volunteer for this job!! HA!

Already the animals personalities and characteristics are shining through. I don’t think I stopped laughing once while I was there. There are Rocky and Charlie the pygmy goats who will climb up just to get closer for a kiss and some scratches. And just like typical goats, nom on anything in sight.

I conclude that every farm needs an honery donkey named Festus. And if Seinfeld quotes aren’t running through your head right now, you’re nuts. He is the Festivus for the rest of us. He loves his pettums, and is genuinely a curious sort with a trudge that oozes of Eeyore.

Jessie is the precocious pony who makes sure everyone is in their proper place. She does her checking, and doesn’t seem to let anyone step too far out of line. My kind of ruler of the roost. I hope I make the cut out here at this place, cause she seems to get the say so.

Her side kick is Barbie, aptly named for her long flowing golden locks. Sadly she was a little too camera shy – but I remain determined, you will see that flowing mane and softy nose!

And of course one of the three puppers, this is Frankie taunting Festus. Frankie is the little 3 month old King Charles who antagonizes his auntie, but she is too much of a softy she just lets the little monster yank her ears and bite her sweet squishy face.
Ms. Reba the 15 year old wire haired rescue who doesn’t tolerate what Frankie dishes one bit. She’s the boss of the dogs – it is clear. To describe her, all I should need to say to any Anchorman fan is Mini-Baxter. There ya go, imagine away. 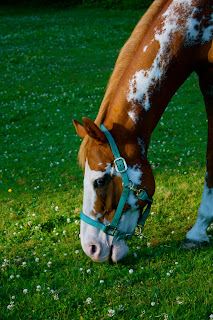 Last but not least – We have Bugsy. The big man on campus. Big brother, softy faced, old man who just knows the sun rises and sets with him. Spoiled and oh so loved, you just can’t help yourself but to fall in love with him too. One day and I’m hooked.
I see many trail rides in our future.
This is the be the beginning of a beautiful friendship.
This site contains affiliate links, if you make a purchase through them, we receive a small commission.
Recipes

« Previous PostHow to celebrate freedom…
Next Post » Flipped Upside Down

One comment on “This is the Beginning of a Beautiful Friendship”