by Megan on September 4, 2011 4 comments »
My life has clearly been lacking as of late. How is it that I have lasted this long without adventuring into the wonderful world of risotto?
Vaguely do I remember growing up with risottos made by mi madre, and at the age of 13 the white wine vapors didn’t appeal to my juvenile and love-of-all-junk-food palette. But now…it’s done a complete 180 and I can now say, I will forever be known as a risotto addict.
Angels are singing. 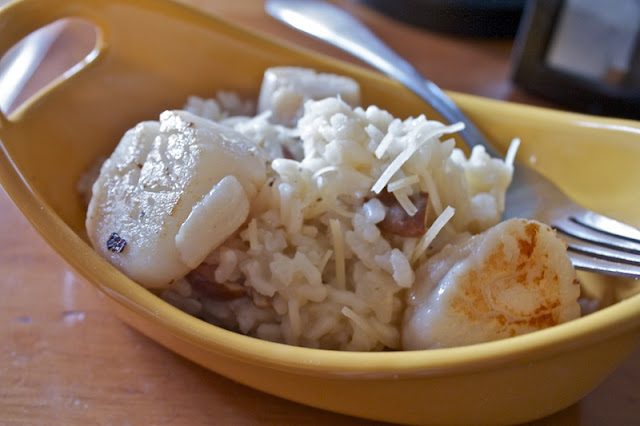 I picked up a few cups of arborio rice at the market, and after searching for a lobster mushroom to replace the one I left in Boise, I settled for a few carmel colored chanterelles instead. Meh, such is life.
In a small saucepan, 2 cups of chicken stock and 2 cups of water was brought to a boil. For good measure I tossed in a sprig of rosemary and a bay leaf for added oomph. Once that was brought to a slow boil for a few minutes, I turned it off and left it warm.
To a large non-stick skillet I added two tablespoons of butter, letting it melt and start to simmer a bit. After coating all rice with butter until the edges started to soften – 3-4 minutes later. Here, the chicken and water from the saucepan was poured over the rice and covered. (I removed the rosemary and bay leaves, discarding them.)
On medium heat, I left it to do it’s business for 20 minutes, stirring occasionally. 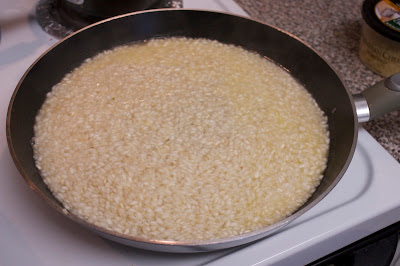 While the rice was simmering, I diced up the cup of mushrooms and poured them into the mix. Also adding 1 tablespoon of minced garlic, 1/2 teaspoon of pepper, and 1/2 teaspoon of salt and 1/4 onion minced. 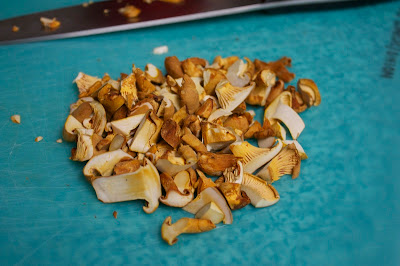 Just before the liquid was completely evaporated and the rice was 90% done, I added 1 cup of white wine and let the final stage of cooking commence. And holy goodness did it smell amazing! 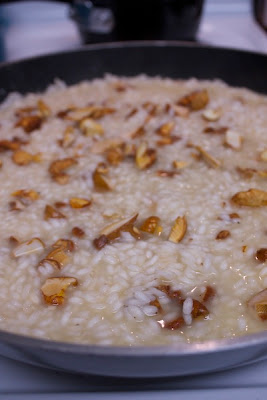 When the wine was absorbed and the rice was soft, 3/4 cup of parmesan cheese was mixed in creating a creamy, delicious, drool worthy dish that I wanted to plunge face first into and not resurface for air. Not ashamed, not one bit.
For the pan seared scallops, I heated 3 tablespoons of veggie oil into a non-stick pan until the oil was almost smoking.
The scallops were laid on several paper towels and dabbed with extra towels to make sure they were devoid of all moisture and ready for a proper sear. As they were plopped into the oil, they immediately took to the heat and sizzled away for 1-2 minutes on each side.
My memories only include scallops that were overdone to the point of tire rubber, and with that memory in mind it was imperative that they were not over-done. When a crisp little brown was on each side of the scallops, I considered them done and miraculously – they were just done on the outside and warm but still tender on the inside. Brilliant!
So, as the risotto was finished and kept warm, it was dished up with a few scallops placed on top. A little risotto and a bite of scallop made for a perfectly quick summer dish that didn’t heat the hell out of my kitchen and gave me a new confidence in something I was to wimpy  and pansy to make all this time.
Next week – more risotto. I require more risotto!!
PRINTER FRIENDLY RECIPE

4 comments on “Risotto with Chanterelles and Pan Seared Scallops”