9 Recipes, countless calories, hits, misses, sugar highs and a comatose session in between, I think I can collectively say “we”, all hankering for a big whopping salad later. So today we are officially done with PW’s latest cookbook.

What a fun trip it’s been though. Today the girls and I wanted to recount all the recipes and take a final tally of the whole thing and see where we stand. Was the book a hit or a miss? Was it a “can’t liver without-er” or a “just read le blog-er”. Is it possible to still fit into the jeans you originally wore at the beginning of this endeavor? TBD. 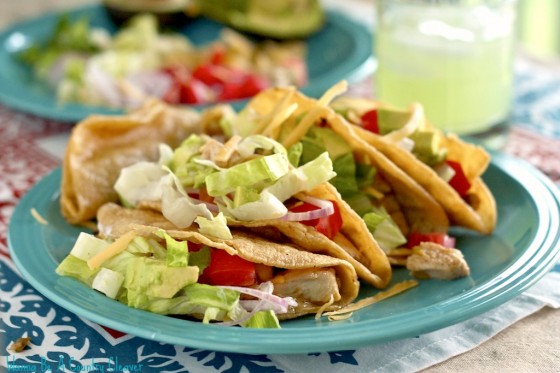 Fried Chicken Tacos were our first venture into the wonderful world of Pioneer-style cooking. Overall – loved them. They totally satisfied my fat-kid cravings – but the folding and frying of corn tortillas was wreaked havoc on my sanity. After about 5 failed attempts to fry the dang things just right, the rage-ahol inside of me was beginning to show. Then as if I’d been making them since birth did they finally hold together just right and not fall to pieces.

My only suggestion – use flour tortillas and have a tub of TUMS for your after dinner mints. I was a hunka hunka heart burnin’ love… #worthit. 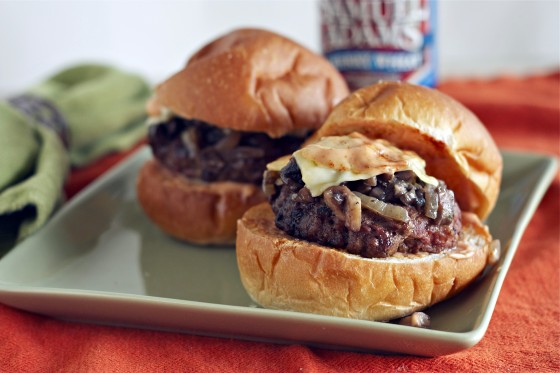 Swiss Mushroom Sliders with Spicy Fry Sauce came up next, chosen by moi. As soon as my eyes skimmed across “fry sauce”, I was sold. First experiencing fry sauce as a lowly freshmen at WSU, I was mystified by this pink condiment. But with trepidation I dared to expand my horizons and now I am forever changed. It’s quite an embarassment to go to a restaurant with me and ask for a side of mayo so I can make my own at the table. In Seattle, fry sauce isn’t “the thing” it is elsewhere – and it PAINS me to no end.

The point is – This recipe did not fail me. It wowed me. And – the mini burgers are a killer combo with Salsa Verde Mac and Cheese. It took me four days to eat through both recipes, and for that I am not ashamed. Okay, maybe a little. 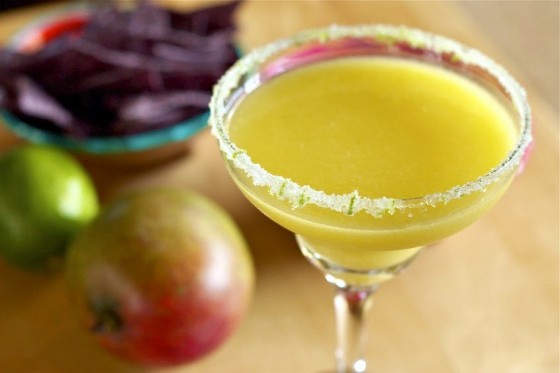 Carnitas Pizza with Mango Margaritas might not have been my most favorite week of the whole countdown, but it was decent. The margaritas were the only thing that made it redeemable. It’s not to say it was bad, but the pizza didn’t back the punch or spice that I was expecting it to. Dare I say, it was border line bland? The other girls raved and carried on – and I felt awful pangs of guilt for being such a buzz kill on the proceedings.

But the margarita? Is there such thing as a bad margarita? Just use the fresh kind, because jarred ones like this recipe called for are too dang hard to find… 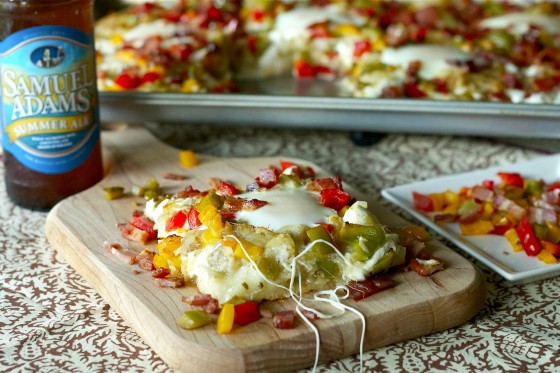 Breakfast Pizza – THIS pizza on the other hand. THIS is something I command you to try, at once. Anything with an egg for a topping is a good idea. Have you tried a Red Robin Royal Burger? Amazing. Pizza with an egg on top – axis shifting, life altering, mind blowing – amazeballs. It just wouldn’t be a BREAKFAST pizza without some sort of clucking product on top.

And if I’ve said it once I’ll say it again – poached eggs, eggs cracked on top of a pizza (or any variation thereof) is the stuff life is made of. 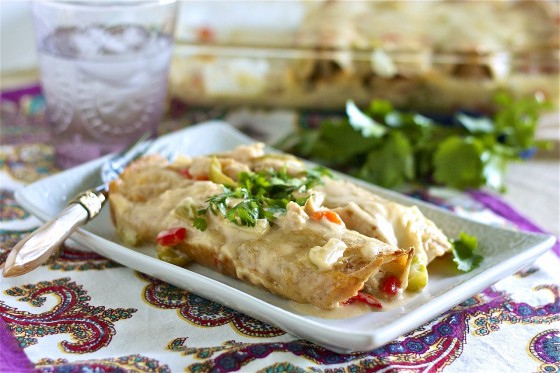 White Chicken Enchiladas was a daunting recipe that called for an obscene amount of cream, cheese and sin. But most of us, by now, were starting to feel the effects of Ree’s ranch style, #butterallthethings recipes. This was one that was easy to adapt and make a bit healthier here and there. Cutting back on the cream and cheese was one. And even with that – there was still plenty. For me, I opted to use High Fiber tortillas instead of the 200 calories per tortilla wraps. 80 calories vs. 200. I’ll take it. There is not enough time in the day to spend on an elliptical. My jiggle can’t take anymore!

These were definitely a winner in my book. Just, make them healthier. Your heart and jeans will thank you. 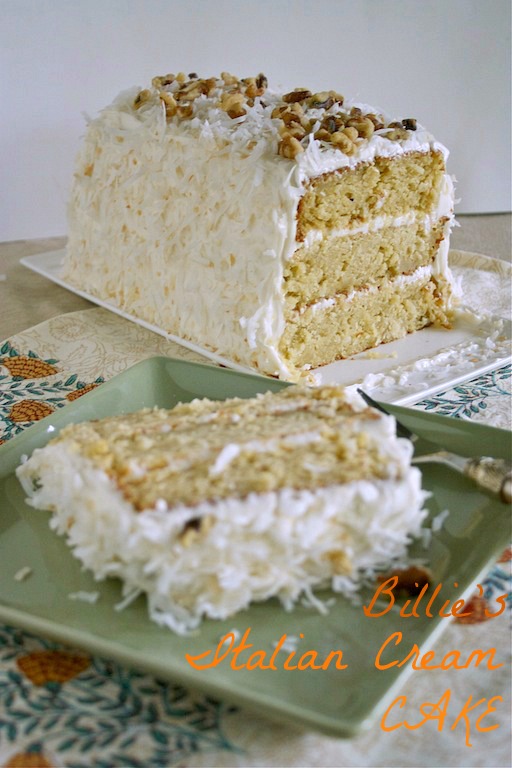 Billie’s Italian Creme Cake is one that completely and utterly flummoxed me. Silly me, I was expecting something Italian in it and creme-y other than cream cheese. This cake was a sugar high rollercoaster that I can only compare to what a heroin addict feels when needing a hit. Because wowzer, that was one wild pre-diabetic ride. The guys at work absolutely adored this cake – which speaks to the man-appeal of Ree’s home cooking. I just couldn’t do anymore than a few bites at a time – and this is coming from a self proclaimed Cake FREAK. The furry slippers on my teeth feeling left from the over the top amount of powdered sugar in the frosting sealed the deal.

Coconut and cream cheese in the frosting though? Of course I’m there. Would I make it again – yes, just healthified and de-sugar-fied, a bit. OH – but I will tell you this – it tastes WAY better after it’s sat for a day or two in the fridge. Then the flavors meld and make it something really tasty. So, see – it’s not all bad!! 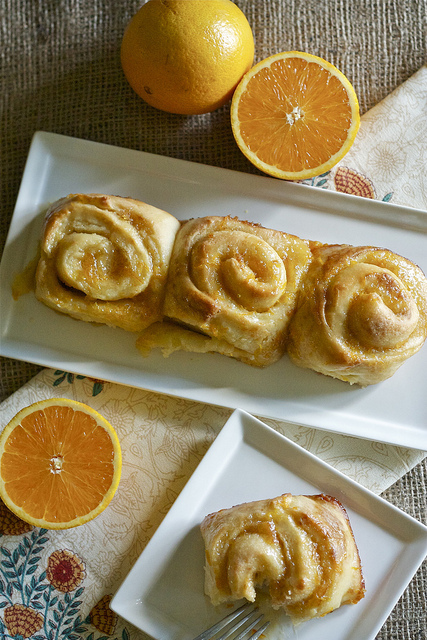 Orange Sweet Rolls were LIFE SAVERS as the survivor’s breakfast the night after my bachelorette party. The carby deliciousness was just what three hung over chicks, and Ben, needed from the activities of the night before. Us girls danced the night away, with me donning a light up BRIDE cowgirl hat, and Ben putting up with three 20-somethings stumbling into the house after closing time. He was kind enough to blow up the airmattress for the girls, but I feel that it was probably more out of self preservation and sleep for him than him “just being a nice guy”. Though he is. But sleep is high on his priority list.

Of the sweet recipes made during out PW Wednesday Cahoots – this is hands down my FAVORITE!! I highly recommend them, putting them ahead of Ree’s traditional cinnamon rolls. And we all know how big a hit those are… 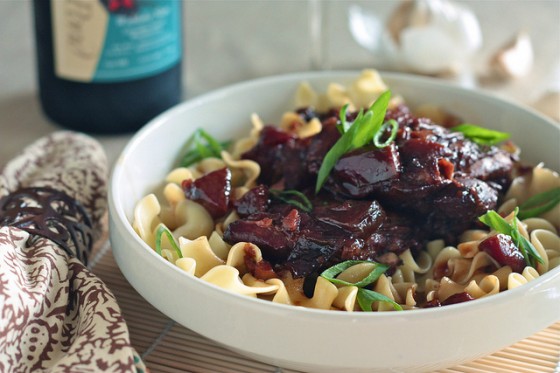 Honey Plum Soy Chicken – dare we say, healthy? With no additional butter added to the pot – it actually was pretty decent. The copious amount of soy sauce however was enough to swell up my fingers like Aunt Who-ever from Harry Potter that got carried off like a hot air balloon. Sexayyy.

Like the cream cake though – this recipe actually was better as Leftovers! And instead of putting it on noodles, I tossed the shredded chicken onto a salad. Impeccable!!

This is a “Make Again” in every way – just decrease the soy sauce amount and use low-sodium. I mean it. 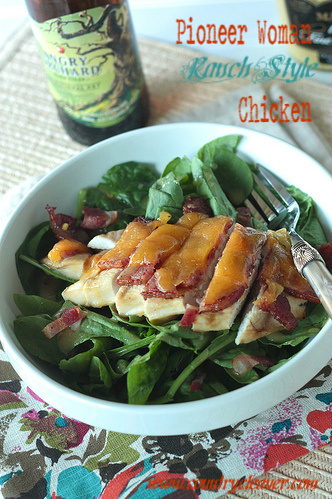 Ranch Style Chicken – was the last recipe of the series. Le sigh. And a great weeknight meal at that. Sure it was tip toeing between healthy and not, with the addition of melted cheese and crispy bacon laid over the top – but it was a delight. The honey mustard marinade was zippy and took no time at all. Ree said her hunny’s favorite way to eat this is sammich style – but again, I opted for putting it on a salad instead. DEFINITELY the way to go with minimal guilt and still leaving you enough room to fit into those skinny jeans. You’re welcome.

Did we love it or hate it? ME? I loved it. Sure there were things we did differently to tone down the butter, guilt and sugar. Unfortunately, I don’t live on a sprawling ranch that allows me the luxury of riding horses during the wee hours of the morning and hauling hay – so in my sedentary desk jockey life there is no way for me to burn off all the butter and deliciousness that Ree puts forth. In another life, sure. So I healthified where I could and still most everything was delicious.

So – buy the book. The woman is a delight, who clearly knows the way to her man’s stomach. And it’s fun to feel like a rebel sometimes, with an extra 1/2 cup of butter here and there. Even if you don’t make a habit of cooking out of it regularly, for your jeans sake I hope you don’t, it’s fun to keep on hand just in case.

How did the other girls fare?? Go check them out now! And stay tuned – because in October we’ve got another surprise coming your way!! The anticipation is killing me!

Gina – Running to the Kitchen

*Author’s note* These are solely our OWN opinions based on our modifications and development. This is in no way a reflection of Pioneer Woman or her cookbook. It’s what we individually think based on our own experience. PS – Ree, I luvaya.

34 comments on “PW Wednesday: The Finale”