The problem with living in a small apartment in the city, as opposed to my ideal dream of living on a huge expanse of land with no one to bug me is that there is a lack of space…to store things. With the staggering kitchen collection I have going on there are only so many cupboards, nooks, and shelves to shove things. It’s like Kitchen Tetris here. I’m one step away from drilling all of the cupboards closed to keep it all contained!

But that’s all beside the point…The point is, Ben doesn’t want me adding to my collection of crap. Fair. Logical. And dang!! I require more stuff. Guess that’s one plus to getting married though – registering for stuff, so soon my time will come. *taps fingers like this is an evil diabolical plot*
And since it is our three year anniversary today we opted for not exchanging any gifts. Saving for a wedding and lack of space being the primary reasons…but since I’m not buying him a gift doesn’t mean I can’t buy you guys gifts instead!!
So until those registry gifts pour in and I have space to expand I will continue indulging my shopping bug in you, fantastic readers who give me so much inspiration and motivation to create, cook, and write (nearly) everyday.
After hearing from Haley about such fantastical deals on magazine’s a Borders going out of business sale I had to see for myself what deals I could scoop up. Boy did I hit pay-dirt! All magazines were 40% off. So I had to stock up. 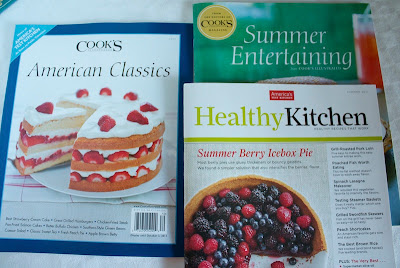 You all know of my affinity for America’s Test Kitchen, so with that I rummaged and pillaged through the zines (how 90’s is that?) to find every ATK publication I could. Over the next three weeks I will be giving away each one of them to one of you fabulous readers! 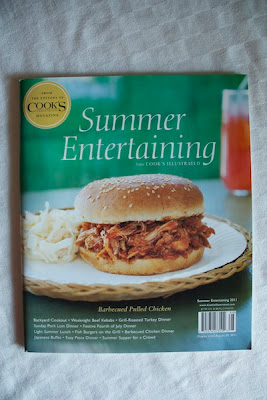 This week’s selection is Summer Entertaining! How appropriate since most of the nation is finally coming down to a nice even sub-sun temperature, we can finally focus on entertaining instead of dying of heat exhaustion. 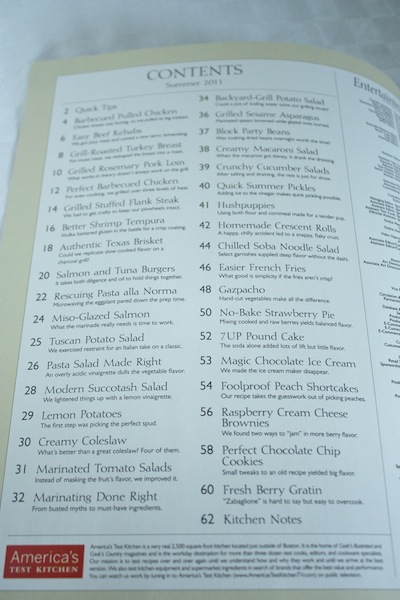 Included in this book are some yumtastic recipes including Tuscan Potato Salad, Fresh Berry Gratin, and oh my gosh I’m so making this – Magic Chocolate Ice Cream! 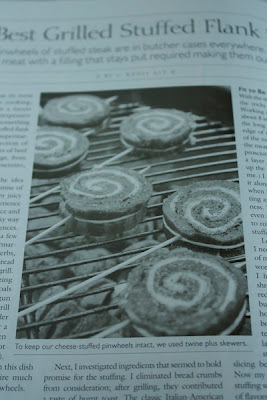 As ATK does with every book, they bolster your arsenal of kitchen tricks giving you flawless results every time. It’s pretty handy knowing someone else has done all the hard work and spitballing for you!
To enter:
~ Leave a comment here telling me your favorite cookbook! Is it the old hand-me-down book from your great-grand-memaw? Or the new crisp edition of Jamie Oliver barely cracked open?
~ “Like” Wanna Be A Country Cleaver on Facebook, and leave me a comment here tellin’ me you did so.
~ Follow me on Twitter, leave me a comment here telling me you did so.
~ And if you retweet or share either of these giveaways on Twitter or Facebook, that’s an extra entry each! Just don’t forget to leave me a comment telling me you did!
The contest will run until Saturday, July 31st. So, hurry hurry!
*And as per usual, this giveaway was furnished entirely by me, myself and I. Because who am I kidding I couldn’t resist buying a set of these for myself and one for you!* Good luck! ~Megan
This site contains affiliate links, if you make a purchase through them, we receive a small commission.
Recipes