Home » Garden » On the War Path

On the War Path

I have this garden. And it’s great. It’s (mostly) growing, some of it even flourishing. Minus one minor detail….

The other part of my apartment garden is being attacked and pillaged by birds! What on earth did I do to deserve this kind of treatment? I am a fan of the birds. Well, I’m a fan of the cute little chirpy ones that just live their lives fluttering around and making people happy – the non-scavenging type. The ones on the assault of my garden however, are starlings.

Those pillaging, heartless, selfish, and worthless birds outright stole all four of my basil plants and began breaking off branches from my little tomatoes! How dare they? They didn’t touch the rosemary, the chives, the spinach or the cilantro – just my adored and prized basils and tomatoes. Jerks!

It was suggested that I should invest in a shotgun – but for some reason, the apartment complex managers may not be as on board with that plan… so I’ll tone it down a bit to something a little less, lethal?  Ben did however chuckle at the thought of me sitting in a rocker out on my balcony, shining a shotgun like an old bitty in the country. It was funny until I realized how true it could actually be sometime in the not so distant future. 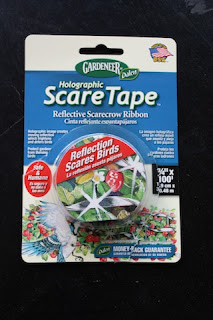 With 100 feet of Scare Tape, I could very well wrap my balcony up like a shiny Christmas gift. But that just seems a bit impractical. 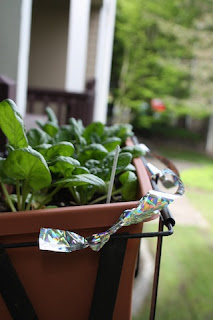 Instead, I gnarled it around the spinach (not that they touched it…), 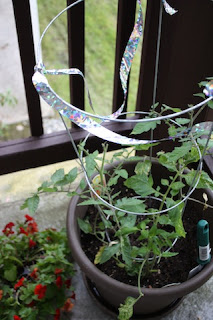 my tomatoes and even bought a cute little wind chime in hopes that a pleasant ring a ding-dinging will scare the heathens off! 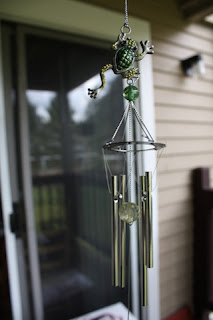 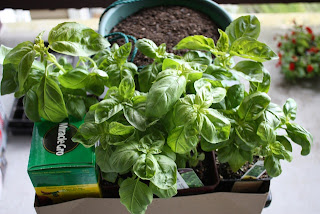 And as a sign of perseverance – I bought 6 basil plants, determined to put those starlings in their place. I am undeterred. So there! *sticks tongue out*. 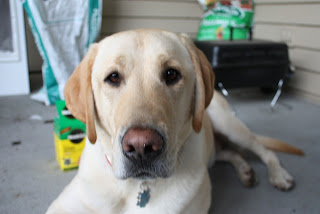 As per usual – Huck did his duty as watch dog. Only one bird has dared return.
What are your gardening secrets?  How do you keep various pests away?
Are a a lethal pest fixer or do you take the kinder, less abrupt approach?
You will be kept posted on the success.
This site contains affiliate links, if you make a purchase through them, we receive a small commission.
Garden

5 comments on “On the War Path”