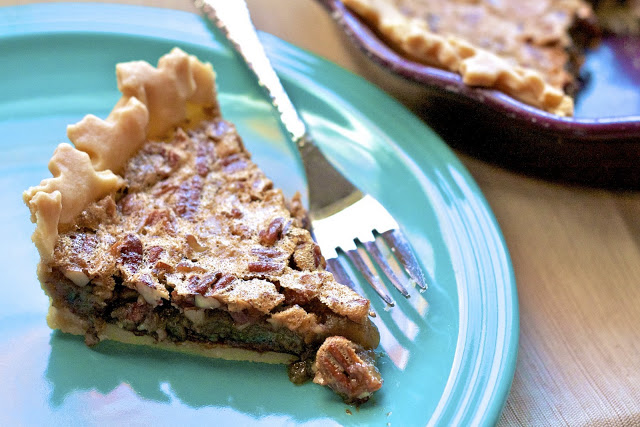 This week, a group of bloggers set out on an adventure. An adventure in pie crusts, fillings and impending holiday spirit. But really we’ll find any reason to make a pie.
We lust for pie. True story.
Over the course of this week, you’ve met some of my closest blogging buddies:
Inside NanaBread’s Head with her Banana’s Foster Fried Pies
Really, Jeanne? Really?
Kat of Tenaciously Yours first Pumpkin Pie
You’re hooked on pies now aren’t ya, kid?
Mads of La Petite Pancake with her Snozberry Pie
I have an insane urge to go lick some wall paper Willy Wonka-style right now…
and our fearless leader Kirsten of Comfortably Domestic with her Apple Tart with Cheddar Strudel.
Don’t knock the combo ’til you try it. Firm believer, right here.
They are what dreams are made of – the bloggers and the pies. But today I wanted to share with you my  utterly sinful and ridiculously rich Nutella Pecan Pie. My love for Nutella is the worst kept secret in the world. Honestly, it’s a miracle that the jar in my house was still intact. I’m not above eating this stuff out of the jar with a spoon. And no, I don’t feel bad about it.
Pecan Pie is the equivalent of what Red Velvet is to cake. It’s really wonderful, decadent and everyone loves it, but for reasons that you can’t quite explain. They’re the elusive monsters of the cake/pie worlds, you love them, but just can’t put a finger on what makes people go ga-ga… So for me, this pie was an adventure into the unknown and uncharted world of pecan pies and what makes simply irresistible. (Yes, I wrote that and did a little jig at the same time. Child of the 80’s here!)
But I didn’t want to settle with JUST a pecan pie, no. I added a half a jar of Nutella to it. 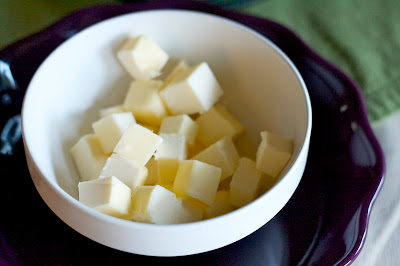 For this pie week, our common thread was the use of Kirsten’s Pie Crust. Flour, butter, salt, water – Go.
Pie crusts and I notoriously don’t get along. But she assured us all this pie crust is one for the ages. Aunt Paula Deen would be proud. And you know what, this was quite amazing. My biggest worry about it was whether or not my dinky but oh so loved 3-cup food processor could handle the job. 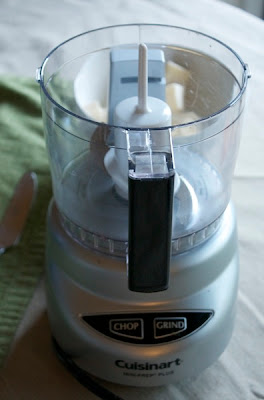 So I divvied the pie crust recipe into two and made one crust at a time. And it was a dream. 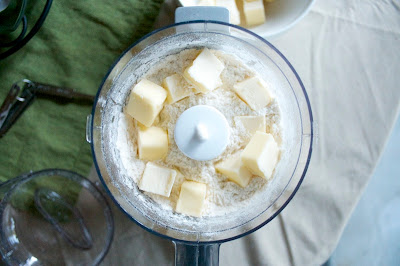 Flour and salt – pulse to mix.
Add butter – pulse until pea sized beads form.
Add water and hang on to your hats! 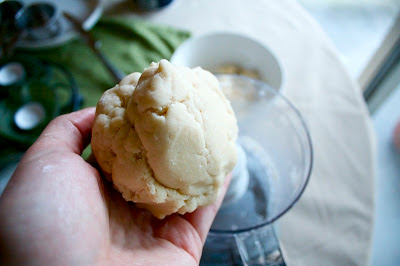 Viola – Le Pie Crust! Beautiful. Maybe there was hope for me and pie crusts after all.
Next up was to pre-bake the crust in my pie pan after it had been chilled. With the innards of a pecan pie being so gooey, the crust had a jump start on developing a nice golden brown color and flakey crust. 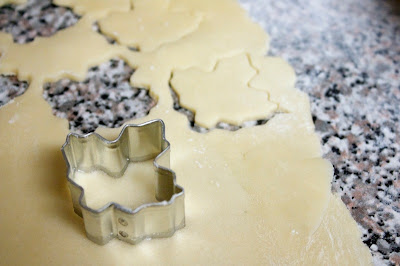 With a bit of pie crust left over, I punched out some little maple leaves to decorate the edges. The cookie cutters were on sale, and now I finally had a chance to put them to work! After it was all pretty and par-baked it was time to get down to business. 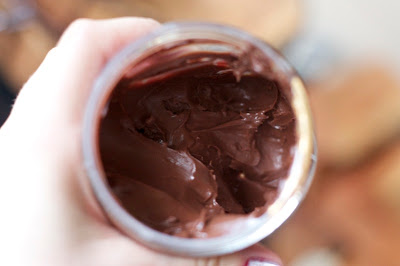 With my remaining half jar of Nutella, I smeared it into the bottom of the pie crust.  It was about a half cup of gloriousness into the bottom. Not too much to overpower the pecan, but enough to take it up a notch. Bam. 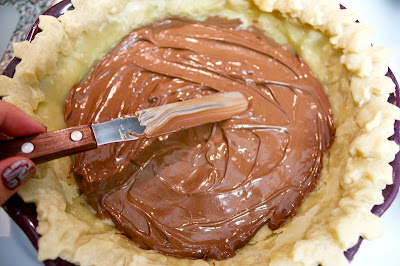 For the rest of the pecan mixture, I combined three tablespoon of butter into a metal bowl set into a skillet full of water. The purpose of this is to help temper the ingredients, especially the eggs without scalding them into a sad and inedible oblivion. Thank ATK for the knowledge bomb.
Once the butter, sugar and salt are combined place the bowl back into the water bath. 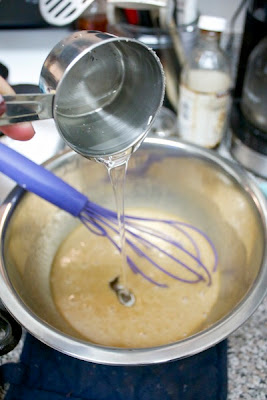 Whisk in remaining ingredients (except pecans) and stir over heated water until the temperature of the mixture reaches 130 degrees. You don’t want your water bath to boil, just sit below a simmer. 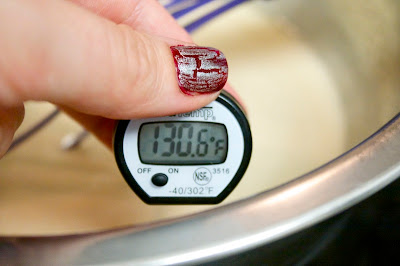 (Okay, the nails – sorry. It’s college football time and I’m represenin’ my WSU Cougars with a Crimson nail and Grey (read: silver) Crackle top coat. I’m a lefty, so painting with my right had is notoriously hideous.)
Once the mixture reached the required 130, it was taken off the heat, pecans were whisked in and the whole kit and caboodle was poured atop the Nutella into the pre-baked crust.
At this point the loving mutt was just staring at me waiting for something to drop, and dinner.
With the oven temp reduced to 275 degrees, the pie was baked for 55 minutes. And when it came out of there, 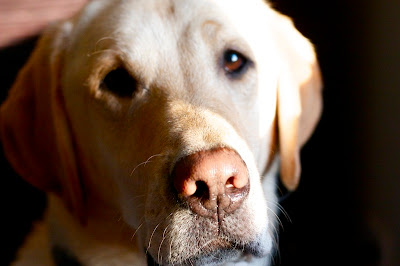 angels sang. The crust was golden brown and flakey, and the insides were a mixture of chocolate and awesomeness. True story. 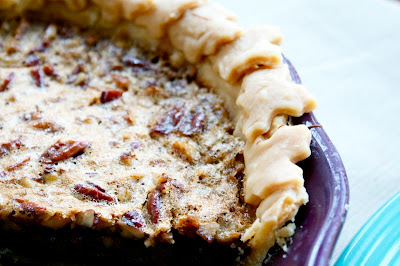 So there you have it. A Nutella Pecan Pie that it will be difficult not to hoard. Now, go forth and share the love.
Tune in tomorrow with Alison from Decadent Philistines for her savory Mushroom and Wine Pie. I need me some of that!
Printer Friendly Recipe
“Come join Love the Pie with TidyMom  sponsored by Cherokee USA, Le Creuset, Wilton,Bags by Bloom and  Harvard Common Press”
Tidy Mom 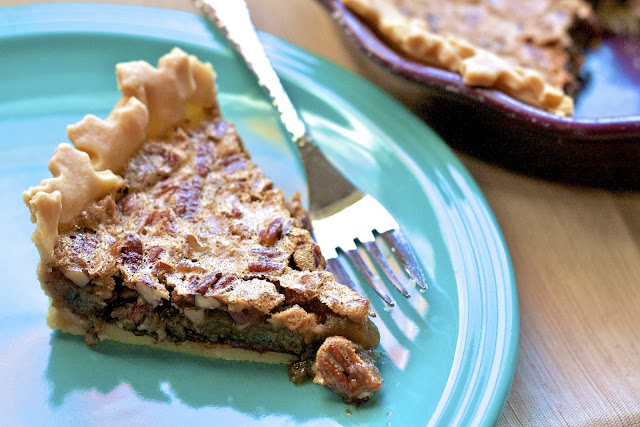 This site contains affiliate links, if you make a purchase through them, we receive a small commission.
Baking Cake Pie Recipes