Who spent this weekend totally refreshed and inspired? And thankful, too? I hope you all had a great Memories weekend, doin’ your first official summer things – BBQ’ing, boating, or dare we say finally just relaxing and doing nothing at all? Not gonna lie, that’s exactly what I did. And I am so grateful I got to do that and spend some time reflecting on what this weekend really meant. Memorial Day weekend always seems like the official kick off of summer – even here in Seattle where it is a 99.9996% chance that it will rain – which it did, but I still couldn’t help but get into the summer-is-nearly-here-but-not-the-sun spirit with a classic Angel Food Cake recipe. I don’t know if it was the summer feeling itself or the fact that I bought 4 pounds of strawberries and I needed to find something to do with them all before they went kaput, but I got ’em. And the only thing that came to mind as I was carrying that truck size load of berries through the store was, strawberry shortcake.

But no, I didn’t pick up angel food cake while I was at the store – because I have an abhorrence to said store bought angel food cake. Does store bought angel food taste chemically to anyone else? I might be crazy – it’s been firmly established here – but the after taste of it, with it’s chemical stabilizers and weirdness that I can’t pronounce just puts a bad taste in my mouth (literally) and makes me want to jump into the thick of things and make it myself. So I did. Yay me. You will absolutely love today’s How-To Tuesday because it goes hand in hand with tomorrow’s recipe of full on Strawberry Shortcake. You can’t have Angel Food cake with out stabilized egg whites, so that’s what we’re doing today – learning how to whip egg whites. And it’s cinch, with a couple of quick tricks.

There is always debate on whether room temperature or chilled egg whites are better to whip – and you know what I found out – it really doesn’t matter. Cold egg whites just take a little longer to whip than their room temperature counterparts – but the end result is the same. Just whip it, whip it good. No? Lame joke? I know, but that’s why you love me.

If you’re hard core and want to whip an egg white or two into stiff peaks by hand go for it – you’re a better (wo)man than I – but I prefer to go the easier route with my stand mixer and whip attachment. For this job I went with my 5 quart KitchenAid Artisan Stand Mixer in Ice. The cool teal is my spirit color, if there is such a thing. It brings me unequivocal joy. And it’s a champ in every way. For the 12 egg whites that I whipped up for the shortcake recipe it did it all in just five minutes. And a dozen egg whites is no short order and this beautiful tackled it splendidly. They were light and fluffy, evenly whipped and they held beautifully. So whether it be whipped egg whites for a shortcake or macarons, this will do the job and leave you feeling like a rockstar.

Step one is to source your egg whites. One of the biggest keys to success or failure with egg white whipping is ensuring there is NO YOLK in the egg whites. It seems trivial but it’s not. Look into the how-to I did on cracking and separating eggs to get it right every time. Once your eggs are separated, add them to your stand mixer bowl outfitted with the whisk attachment.

Another key to perfectly stabilized egg whites is Cream of Tartar. It’s not just for snickerdoodles anymore people! This is pivotal in keeping those egg whites fluffy, even after folding in additional ingredients. It will be an egg-white-awakening here friends. Really. For a dozen egg whites I used 1 1/2 teaspoons. You can always reduce the amount based on your egg white count in your recipe. I am dying to make macarons and add some in there, because folding my almond meal into my eggs always used to deflate the eggs and it made me have a serious case of the sads. 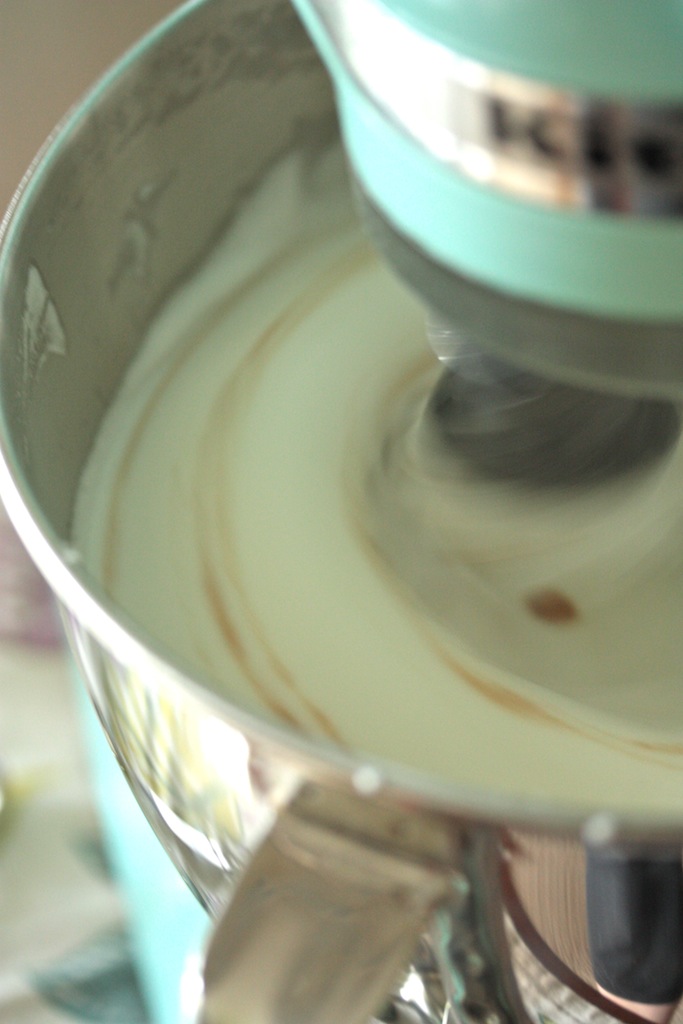 Starting with your mixer on medium-low, beat the eggs and cream of tartar until they start to foam and air starts to incorporate into the mixer. After about 1 minute, up the speed to medium to medium high and let ‘er rip allowing the air to incorporate into the whites. They will increase in volume and really start to get fluffy. It’s the The Blob!! 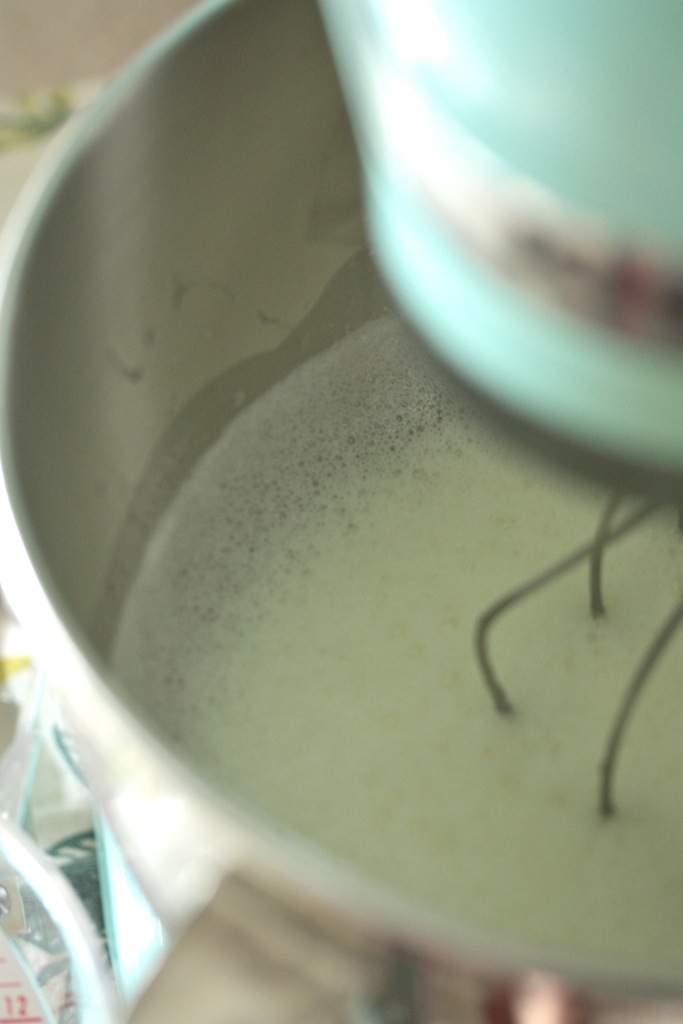 Once the eggs have started to set and thicken, slowly add in your sugar if it’s part of your recipe. Slow is key, like a gold fish – you can’t just toss it into the water! Be kind to your egg whites and slowly pour the sugar in allowing it to incorporate. 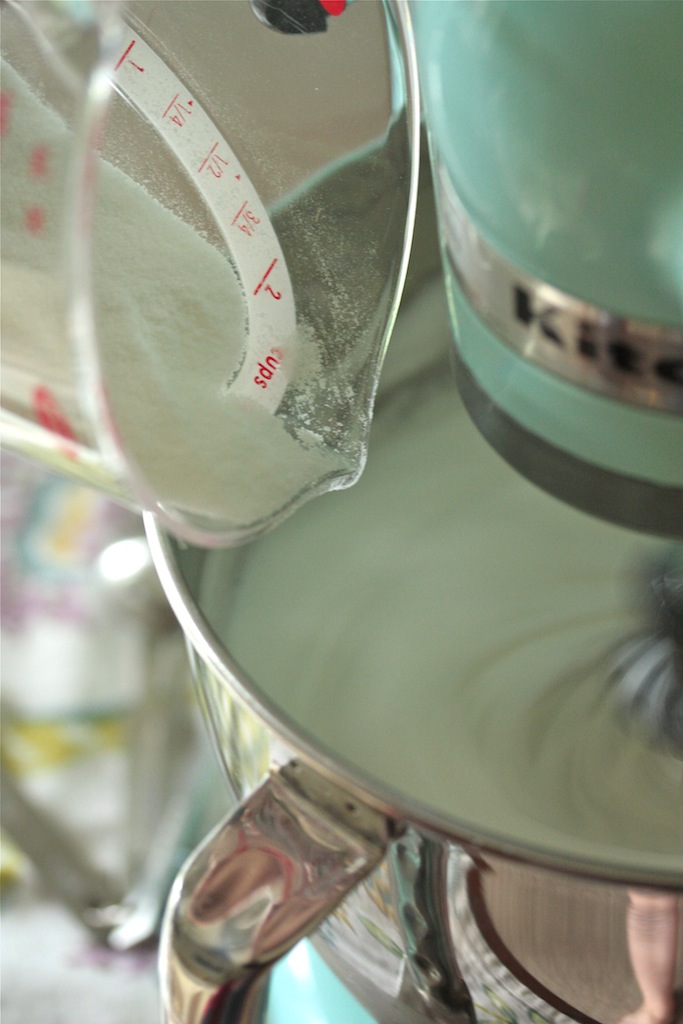 Lastly, add in your desired flavor. My favorite combination is almond and vanilla. It makes me want to say things like, “I’m super keen on it”. Because, well – I am. It’s a great balanced flavor and not totally boring. I love vanilla, but some days you gotta switch it up.

Then after about 1 more minutes, the peaks will set into semi-stiff peaks and you’re done! If your egg whites start to look curdled you’ve gone too far. But that takes a lot of egg-fort – get it?! 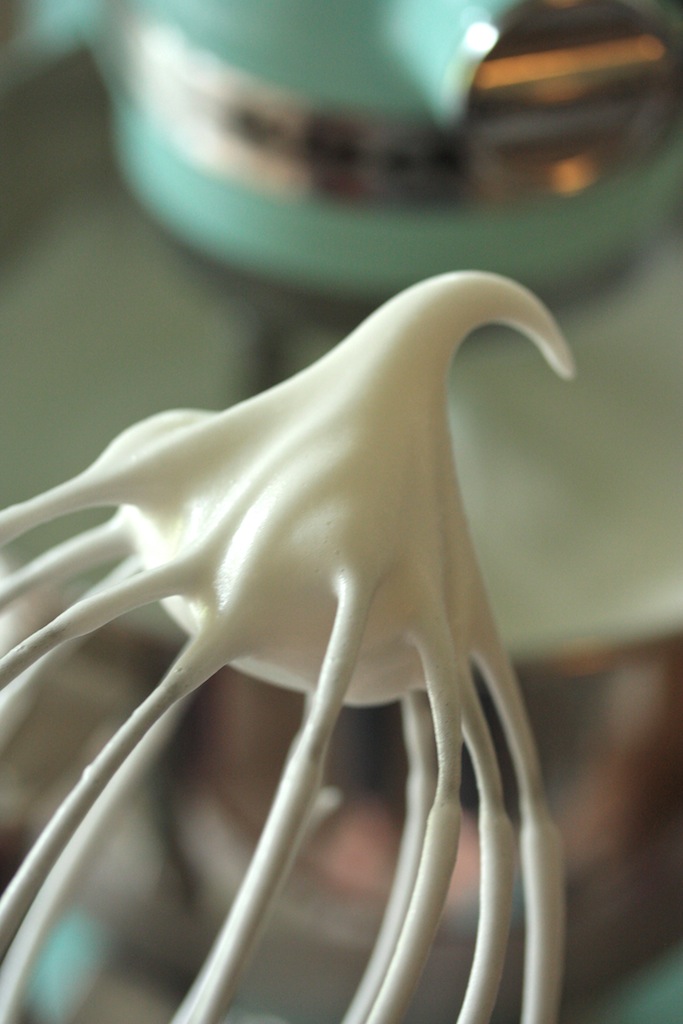 So in five minutes you too can have perfectly whipped egg whites that will stand up to folding, piping, macaron-ning, and shortcake-ing.

For additional how-to Tueday’s check out this list below!

How to Poach an Egg

How to Make Chocolate Magic Shell

How to Roast Garlic

How to Roast Peppers

How to Season Cast Iron 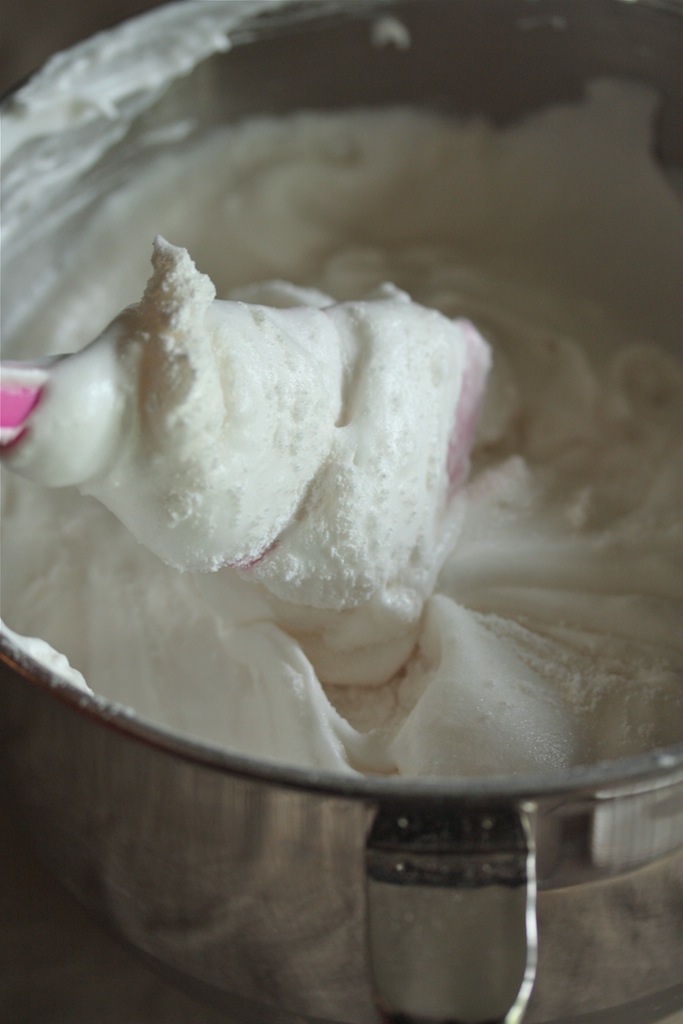 This site contains affiliate links, if you make a purchase through them, we receive a small commission.
Baking Dessert How-To