Dad left on a jet plane yesterday on an 18 hour flight to the mystical and exotic land of Oz. Before he left Beka and I decided it was necessary to give him a dinner to remember us by while he’s off working hard and away from his family for the next six months. Let me just add that this is the first time I will not be seeing my Dad in six months – that’s Christmas people. This daddy’s girl is a little weirded out by that whole revelation. Thank God for Skype or else said girl, i.e. me, would be a whiny mess. Oh, wait.

Moving on… I’ve raved about the Komado Pot here before, and seeing as it is a staple in the Pence household, it seemed appropriate to include it as the mode in which to cook up our meal.  Originally, I figured to make this a true grilled meatloaf it would need to be cooked right on top of the grill grates, but quickly came to the conclusion it wouldn’t baste itself in it’s own juices if all of the juices were allowed to run off of it. That’s just plain not acceptable. Instead, I threw a couple of mini loaves together in disposable aluminum pans. Brilliant.
Now everyone has their own special, “just like Mama made it” meat loaf recipe, but by far the best one I’ve ever had was Beka’s. In college she and our honorary third roommate Nick had a Bobby Flay-style Meat loaf throw down. Both good, but one was crumbly and made with oats, the other thick, dense, brick-like (in a good way) but still the most tender and delicious meatloaf of my life. No joke. So, we decided Beka needed to be in charge of the meatloaf made for my dad’s going away dinner. What a great practically-third-daughter she is.
For her famous meat loaf your Grocery List needs to include:
1 lb meat (i usually do all beef, but I’ve split it with beef and turkey or pork before. Fat is good)
2-3 eggs
handful of bread crumbs (I prefer matzo meal)
dash of: soy sauce, worschestizer sauce, salt, peppper, maybe some red pepper flakes
clove (or 3) of minced garlice
if you’re feeling fancy, maybe some chopped mushrooms or sauteed onions

mix meat with spices, 2 eggs, and handful of crumbs.
mush together
should feel like meatball
add eggs and/or breadcrumbs as necessary
smell
spice as necessary
preheat oven to 350, form meat into loaf, and bake until done (usually ~45 min if only using 1 lb)

(unfortunately, this comes from my mom’s collect of: put stuff in bowl, mix until looks/smells right, bake until done. Which is not necessarily conducive to sharing…) 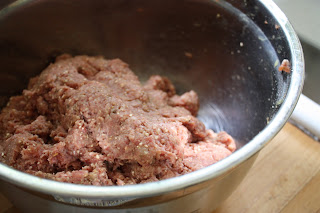 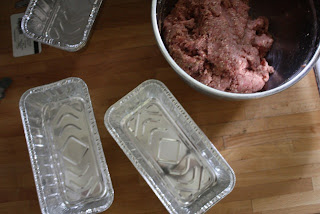 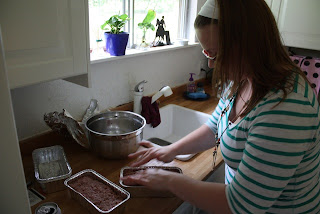 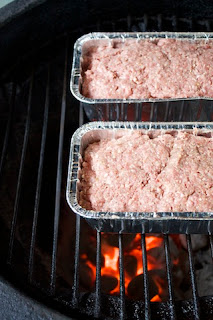 It smoked and baked away in the komado for about an hour letting it roll in it’s own juices and create deliciousness in a tin. It’s like meat heaven. Meat angels will sing.
Beka’s other mission was a bread side – to which she turned to Buns in My Oven and her completely addicting recipe for Bacon Pinwheels.
It’s carbs, cheese and BACON all wrapped up in one little package. Food erotica. It will make you want to do bad, bad, naughty things. 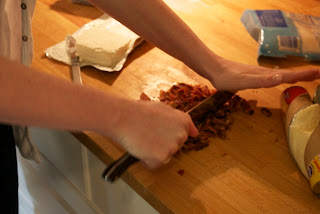 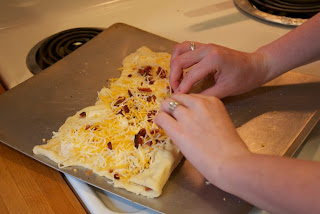 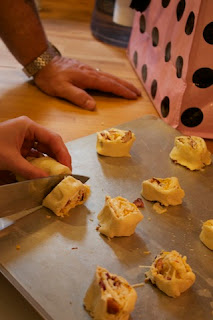 Or your bestie’s – whoever is closest. 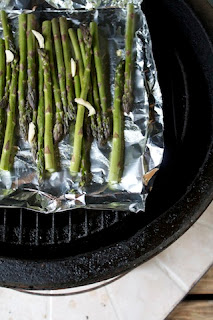 Just for the appearance of health and a balanced diet, asparagus with olive oil and garlic was thrown on the komado and roasted to perfection. Al dente – as asparagus goes. 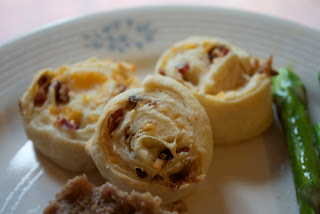 I wasn’t lyin’ about those pinwheels. Girl done good. 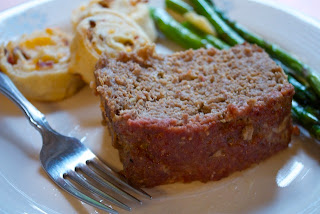 Piece de resistance.
Perfectly dense, semi smoked and ready for my belly. Sidebar – this makes the most incredible meatloaf sandwiches, but that’s just the old lady comin’ out in me. Dad was not disappointed, and I know you guys won’t be either.
So, go light up your grill – now, right now!
This site contains affiliate links, if you make a purchase through them, we receive a small commission.
Recipes