by Megan on February 4, 2011 6 comments »
Every time I venture to Montana there is inevitably camping involved.  And along with camping comes a fire –  a big one.  So, when Haley asked me to write a post for her I jumped up and down at the chance to honor my favorite Montana blogging buddy and contribute a couple of recipes taken from my favorite camping past time – S’mores making. How can you not love s’mores? Between the melted chocolate, toasty mallow, crunchy graham, sticky fingers and the flailing of burning marshmallow on a stick when you catch it on fire, its bliss.
To get this summer time camping nostalgia at home, these s’mores cupcakes should be at the top of your list. I will start you off with a moist chocolate cupcakes, homemade mallow frosting and have some grahams to scrunch on top. 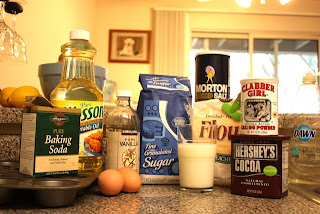 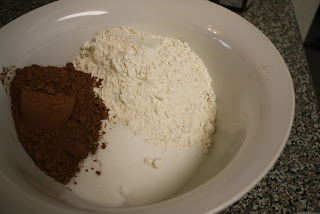 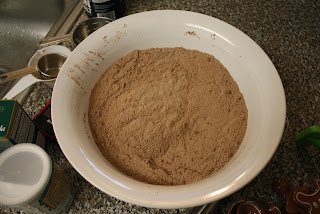 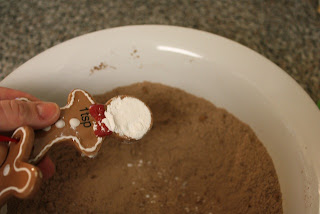 (See Haley, still using ’em!! I love these things, they have little smiley faces on ’em! How can you not smile back?) 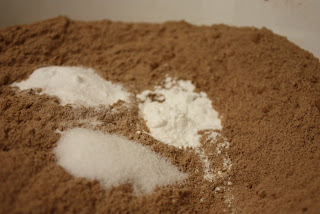 Add the eggs, milk, oil and vanilla, mix for 2 min. 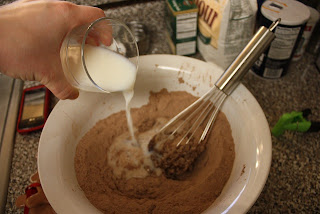 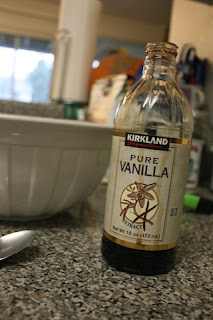 And after all of that, don’t forget to stir in the boiling water. Talk about fun, huh? 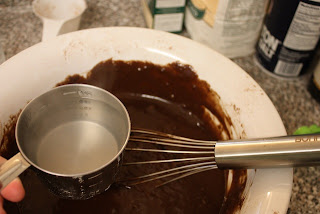 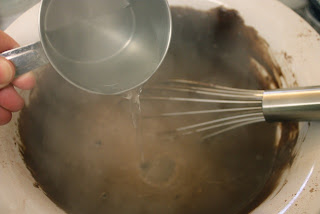 Batter will be thin. Don’t let this freak you out. They will set up to be very squishy, moist and absolutely scrumptious. Promise! 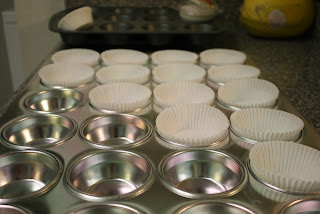 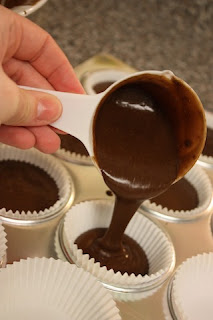 Pour into cupcake liners (about 3/4 full) . I really recommend using the aluminum foil liners if you can on this recipe. I realized I ran out a little too late and had to settle for the paper ones. Since these cupcakes are so fluffy, they need the structure of the aluminum liners to make sure they hold a nice shape and can handle a good frosting.
Bake these bad boys for 12-16 minutes or until a toothpick comes out clean. Cool in the tins for about 5 minutes until you can handle them without burning your paddies off and then move to a wire rack to finish the cooling process. Since ovens vary so drastically (mine is notoriously a pain in my rear!) I want to give you a broad range. These ones took about 15 minutes.
And now….to the fun part!! The marshmallow topping! This is where it does get a bit tricky, but if you’re up for it, this frosting will pay off in spades. Spades, I tell you.
For your grocery list on this part you will need,
~2/3 c. regular white sugar
~ 1/3 c. light corn syrup
~ 1 1/2 tablespoons water
~ 2 egg whites
~ 1/2 tsp. vanilla extract
It’s deceiving how few ingredients you need here, but it will work for 24 cupcakes. I swear!
In small sauce pan over medium high heat, add the sugar, corn syrup and the water. Stir together until they are dissolved, bringing these to a rolling boil. 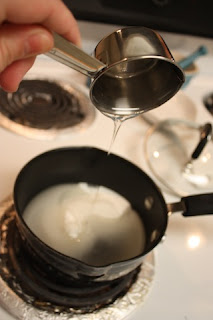 With a candy thermometer, keep a look out until 235 degrees is reached. This will take a few minutes, about five-ish. 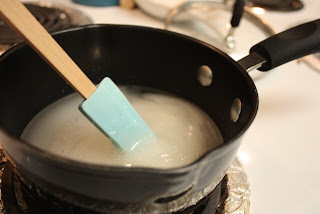 In the mean time – you’ve got egg whites to whip sister! (Or brother, depending on who is reading this. I don’t wanna be accused of gender-misrepresentation here!)
Now, I love love love adore my Kitchen Aid. But sometimes when I’m only needing to whip up some egg whites, particularly two – it’s not enough to really utilize the whipping attachment, so I start it off by hand. 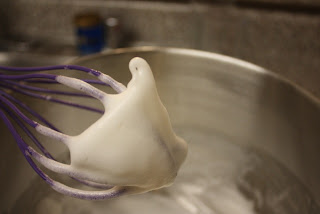 So, separate your two eggs leaving you with just the glorious whites. Beat the living day lights out of them until soft peaks form. It doesn’t take as long as you think, so stick with it. And it’s a good arm work out. The Shake Weight has nothing on beating egg whites.
After this is done, it is best to have your egg whites in the bowl you will be completing the frosting in, cause in this next step, you don’t want to do this by hand.
When your boiling sugar/corn syrup mixture has reached it’s 235 degree boiling point, turn your mixer on low and slowly pour in the syrup to your egg whites. This is going to be VERY scalding hot, so be careful. After they’re incorporated, turn that baby on full blast and keep it beating until the bowl it totally cool. It’ll take a while, so let that air work it’s way in and do it’s marshmallow-y business.
At the last step, just before you are done, add in your 1/2 tsp of vanilla. This will give them the proper mallowy taste. 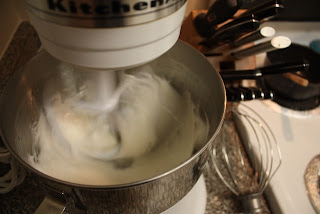 Eons later after the batch has cooled… you’ll be able to scoop it into a piping and top those cake babies. 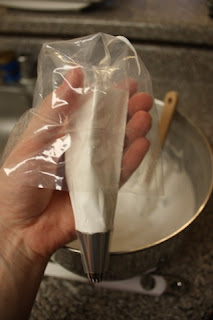 Did I mention how sticky this process is? 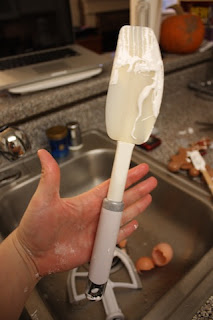 Though, don’t despair, a wonderful sense of accomplishment will follow your trudgingly difficult journey. 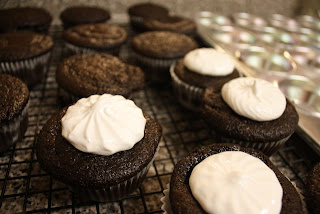 The frosting isn’t always stiff, so after they pipe out lookin’ all purdy, they will ooze all over like a proper toasted mallow and coat the cupcakes in gloriousness.
And to top ’em off – crumble up some graham and go to town!!
(But as a side note, be sure if you are not serving these right away, don’t add the grahams until the last minute so they retain their crunchy properties.) 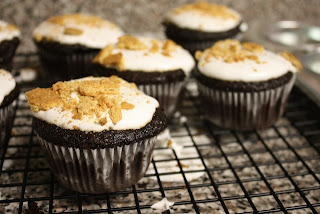 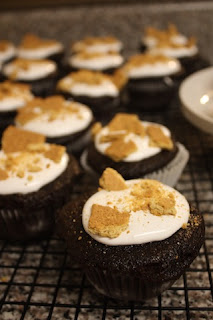 And away you go!! Serve these when you can’t get outside into nature and have a rip roarin’ fire with your friends. These will calm the urge until you get the real thing.
Thanks again Haley for guesting me on Girly Girl Cooks, it’s been a blast, an honor, and I’m lucky to have such a great bloggie friend.
All the best and happy cookings!
~Megan
at Wanna Be A Country Cleaver
Printable Recipe Here! 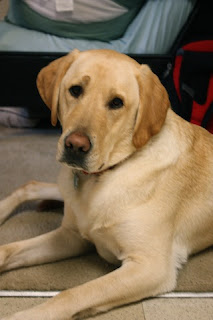 Momz….can i haz a cupscakez noww?
This site contains affiliate links, if you make a purchase through them, we receive a small commission.
Cupcake Guest Post