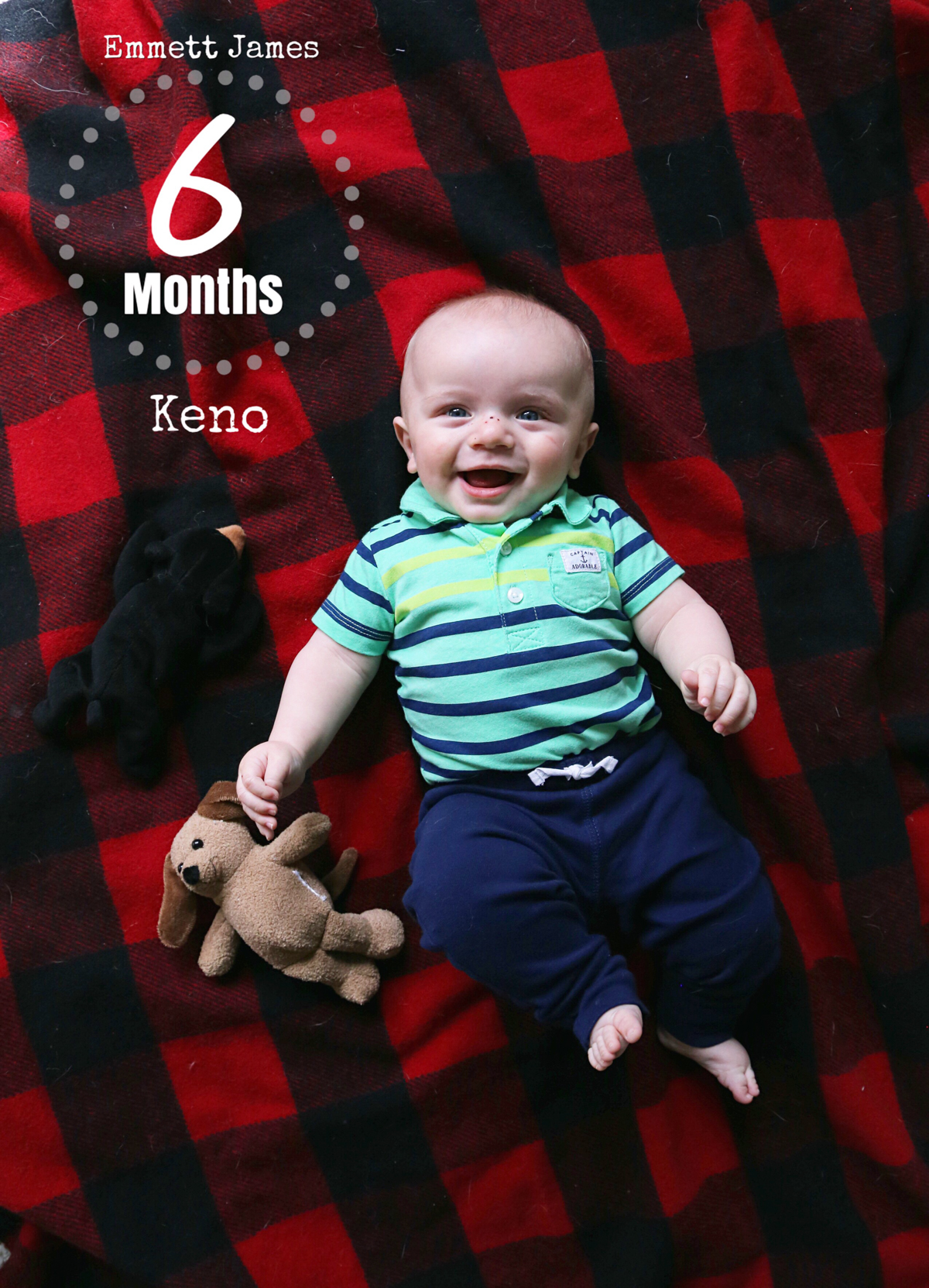 Easter has come and gone, along with Emmett turning 6 months old. Never having made a big deal out of the other holidays that have come and gone, I wanted to do something a little special for Easter. Christmas came and went without a Santa photo, and sometimes I regret that, but getting Easter bunny photos was one I was willing to pass on. Have you ever seen a non-horrifying Easter bunny? But in lieu of that I got us photos of him opening up his own basket filled with little baby things that I know will come in handy. And the poor boy got his own Easter bunny ears… because that’s just the kind of mother I am. 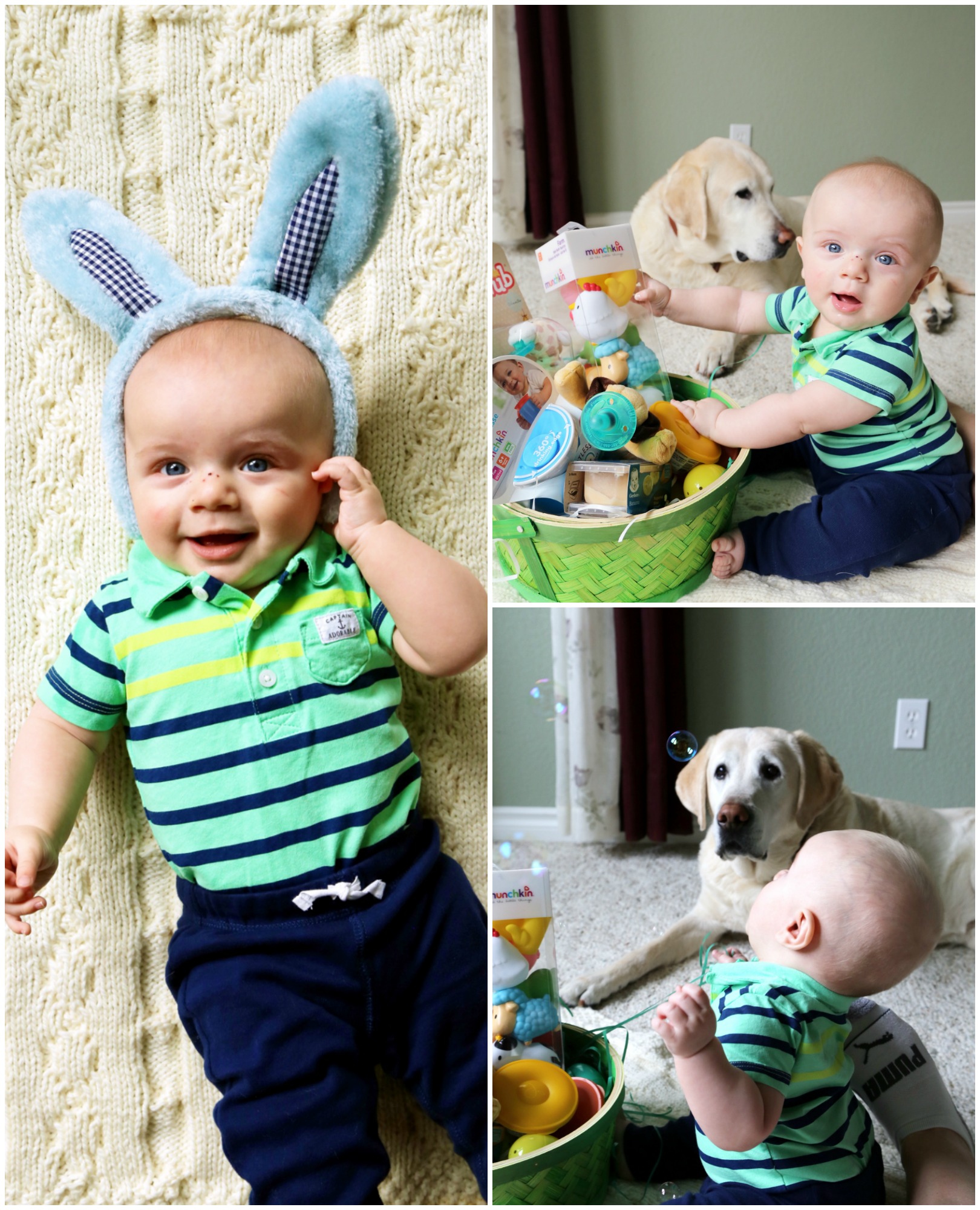 But dang look how cute he is! 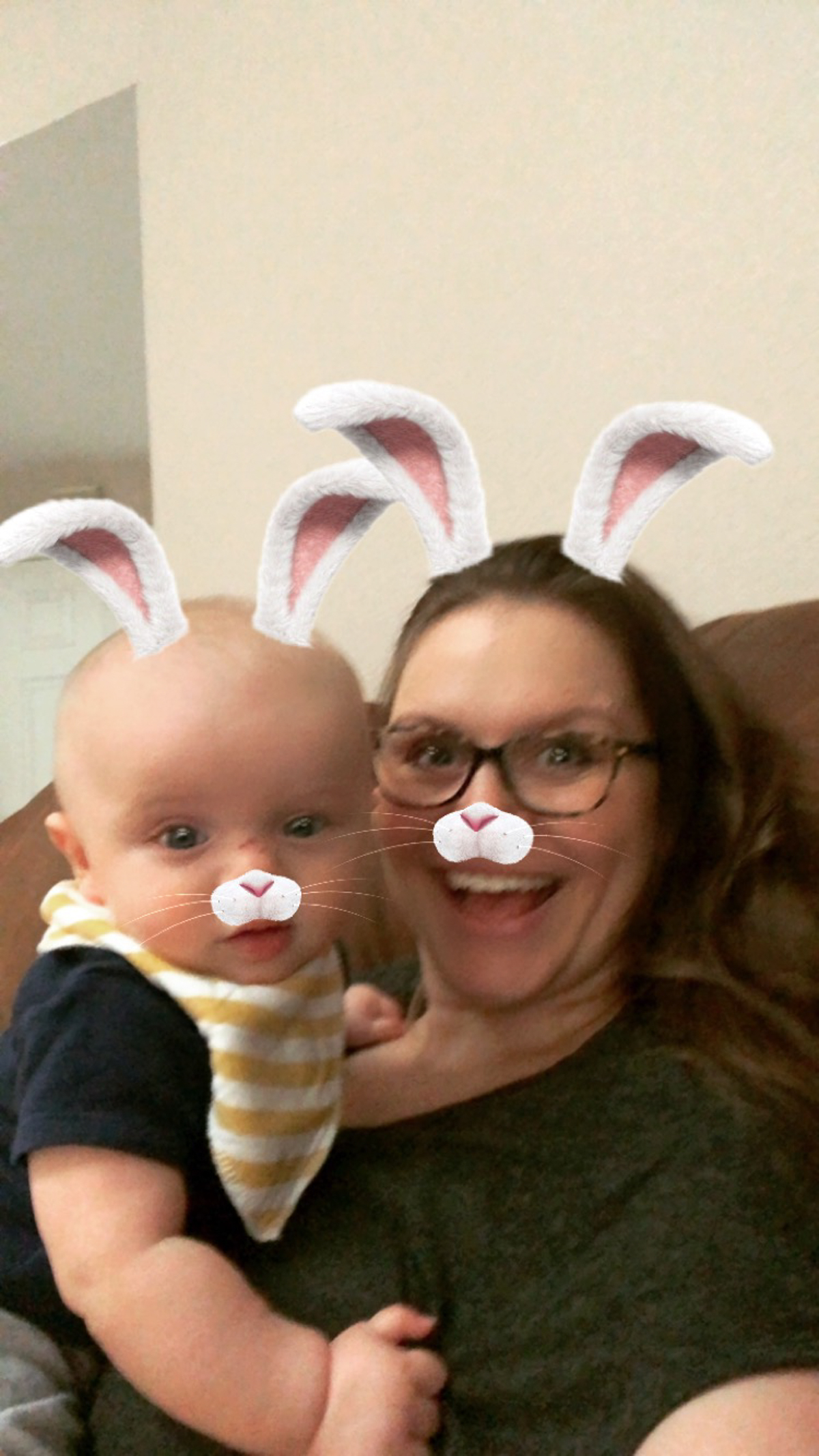 He has never been a binky baby, but with the constant chewing I have been convinced this last month would mean the emergence of his first teeth, so I ordered a couple of Wubbanubbas thinking that they might help him soothe himself. They prove to be excellent chew toys but not soothing enough for him. And he hasn’t figured out the wonders of a stuffed animal to hold on to just yet. I added in a sippy cup just to have on hand for whenever he is ready, some tubby toys in the shapes of farm animals, bubbles and some new baby foods to try. Baby foods have gone hipster, you guys. Papaya mango oats? Beets berries and flax? These babies are going to grow up to be foodies!  But as a food blogger I am the last person to have a problem with that. 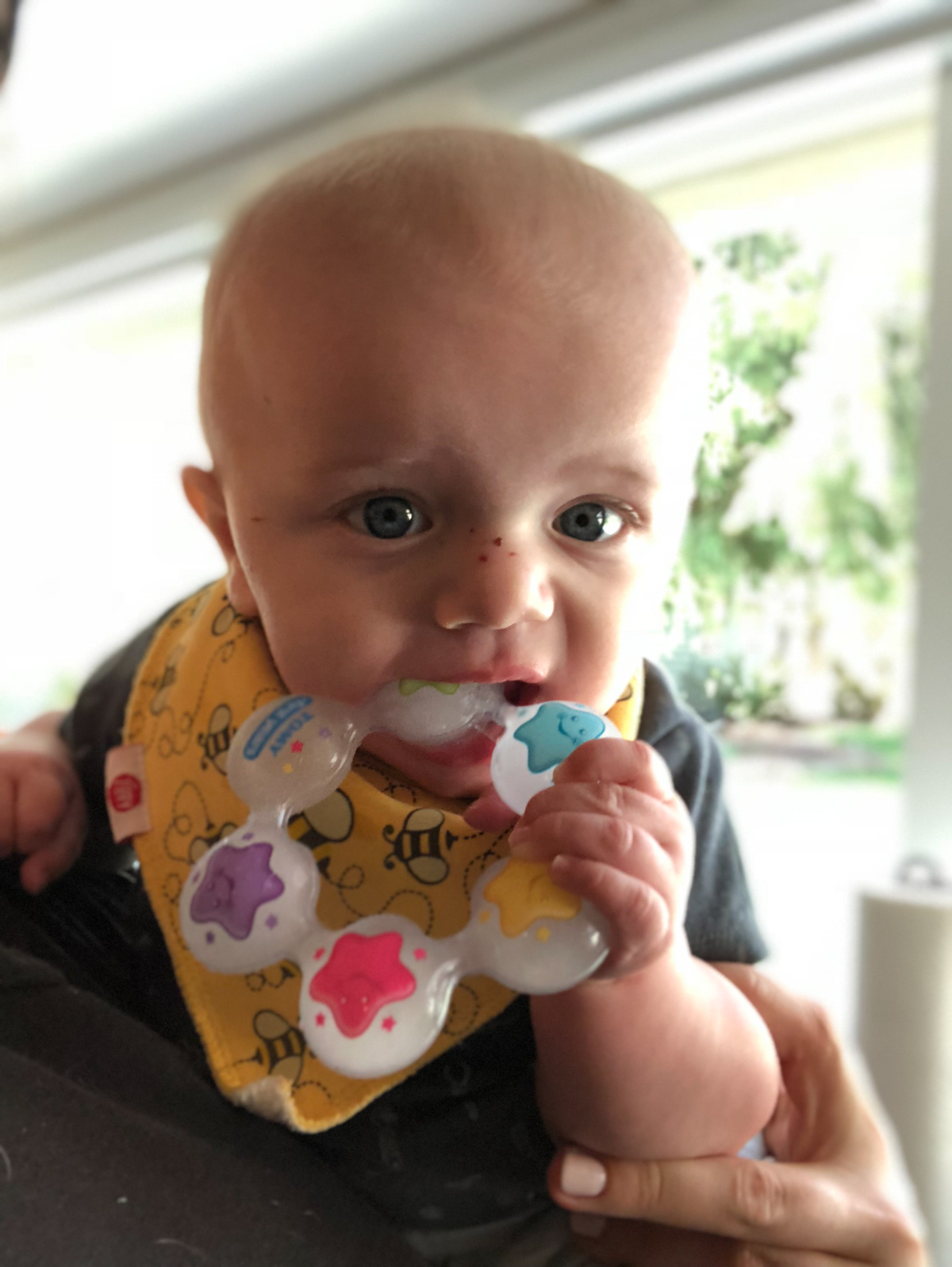 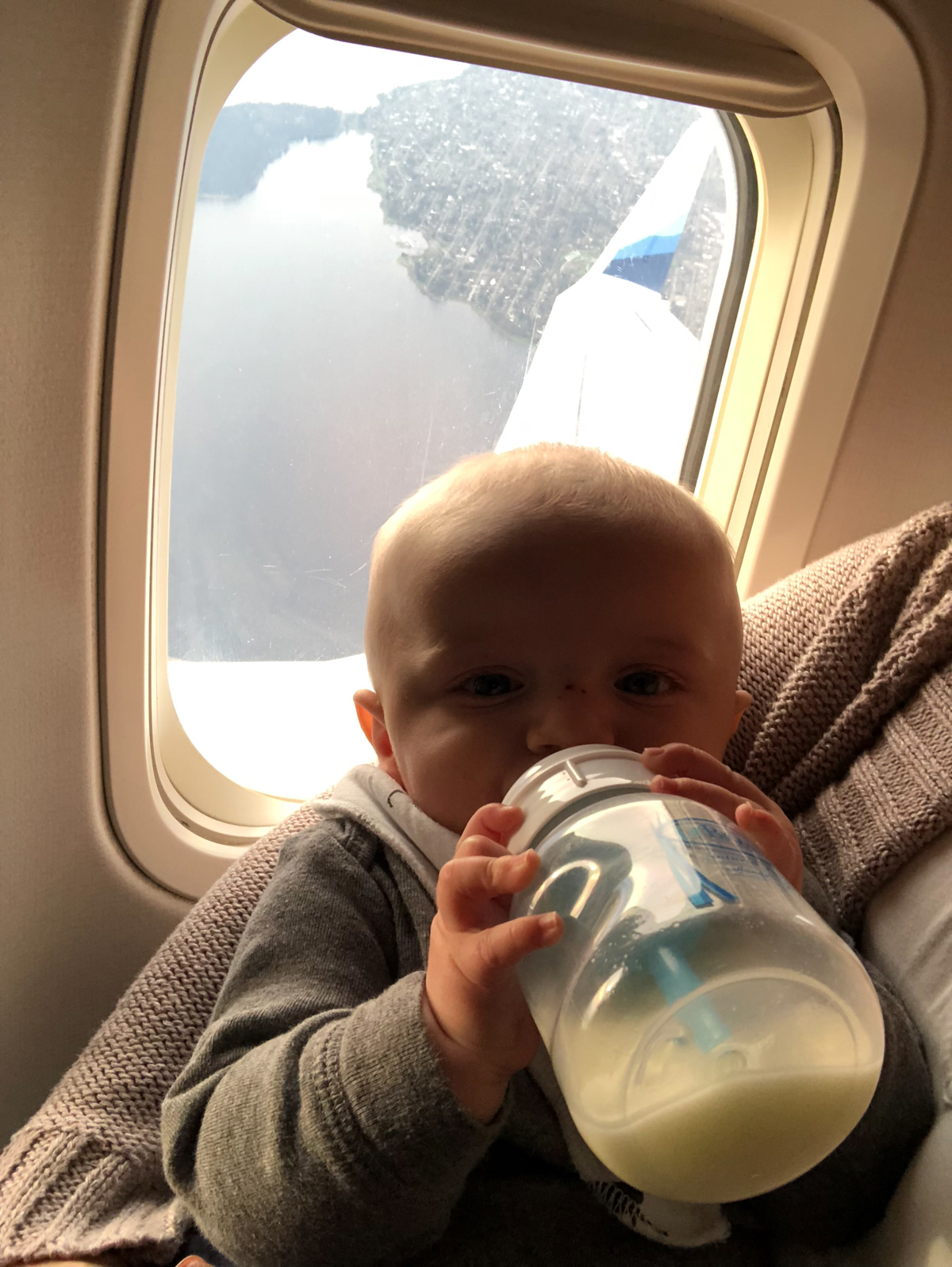 Emmett also had his first plane ride this month! We made a quick day trip from Seattle to Spokane for my dearest friend Corinne’s baby shower. Corinne and I have been best friends since college, been camping together, been in each other’s weddings, and been there for one another through thick and thin. Last time we saw each other was at my baby shower in August, so it was her first meeting with Emmett. Clearly they aren’t entirely smitten with each other or anything! 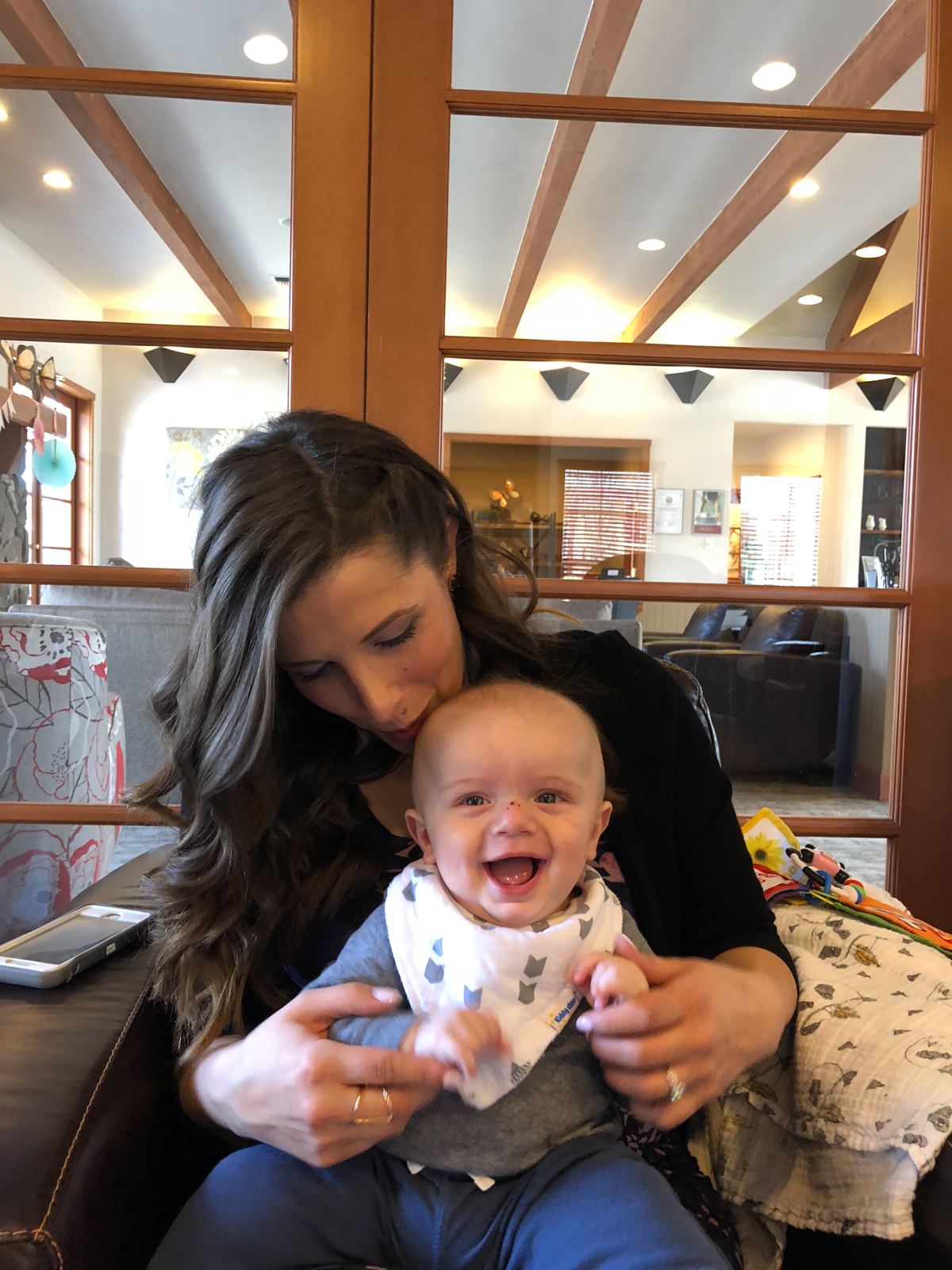 I was terrified of the plane ride, anxious about everything, but in the end Emmett was a real champ! He got his bottle at take off and zonked out for the quick 40 minutes flights. But let me tell you, even 40 minutes of holding will make your arms TIRED! Just think of how it will be when I take him to Michigan this summer! Woof! 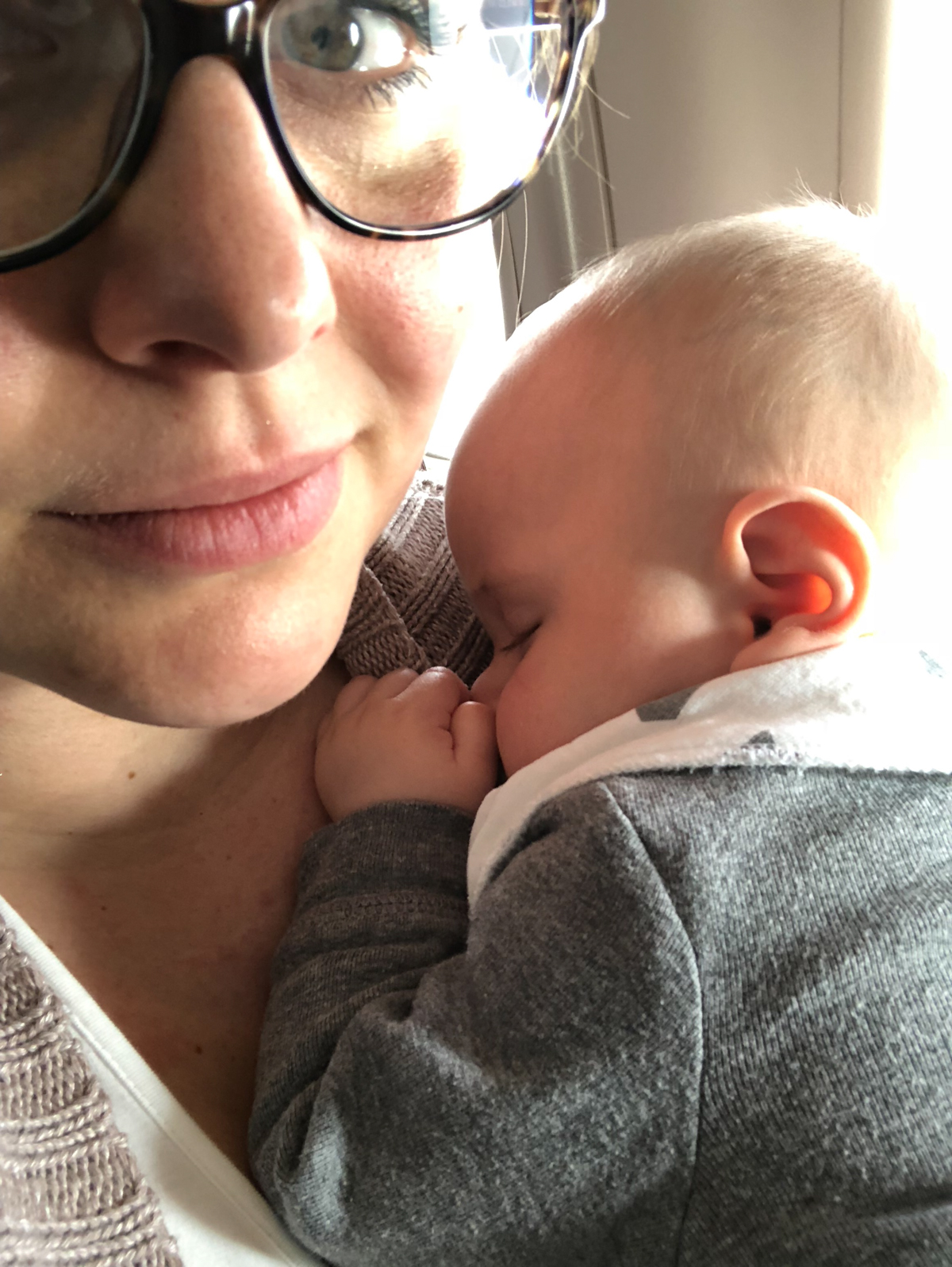 At our 6 month doctor’s appointment he was the life of the party finding out that the paper covers for the tables are the neatest thing since mom’s boobs. Our pediatrician said she wishes she could find a way to patent this stuff from rice paper or something nutritious because babies crinkle it, tear it and try to eat it every day, so they might as well get some value out of it! At 18 pounds 3 ounces, he is growing like a weed, and his development is in the 7-8 month range. Emmett is sitting up on his own, rolling like a wild child, playing with his feet non-stop, and putting all his weight on his feet when you stand him up. All of this lead me to feeling like the proudest mama out there. 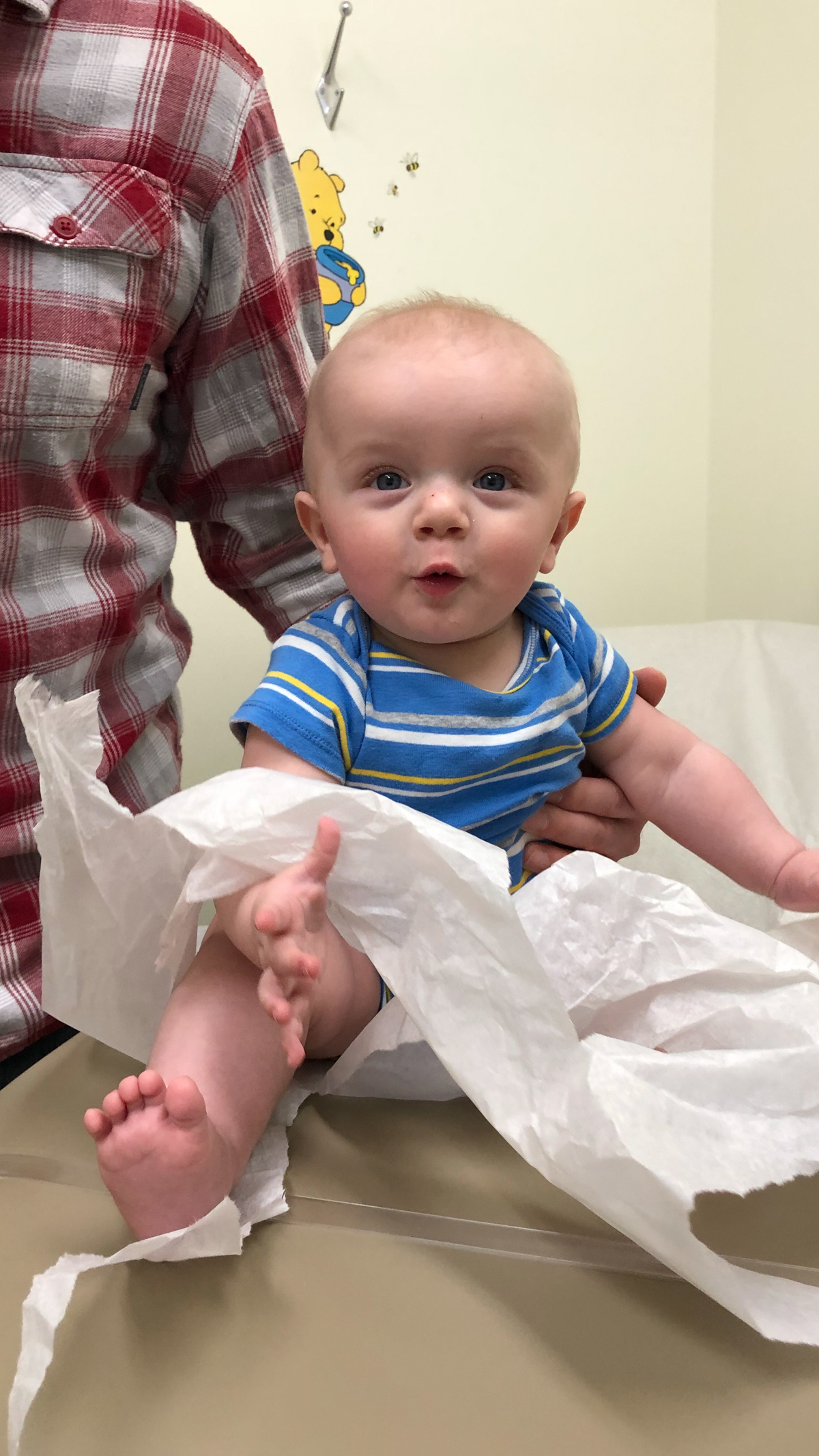 There are days where I am still utterly shocked that he is mine and Ben’s. Our boy. I love watching Ben as a dad, and how much he loves our boy, even when Emmett wants nothing but holding, or when Ben is changing him and Emmett just wants to touch his daddy’s face and get tickles from Ben’s buzzed hair or beard. 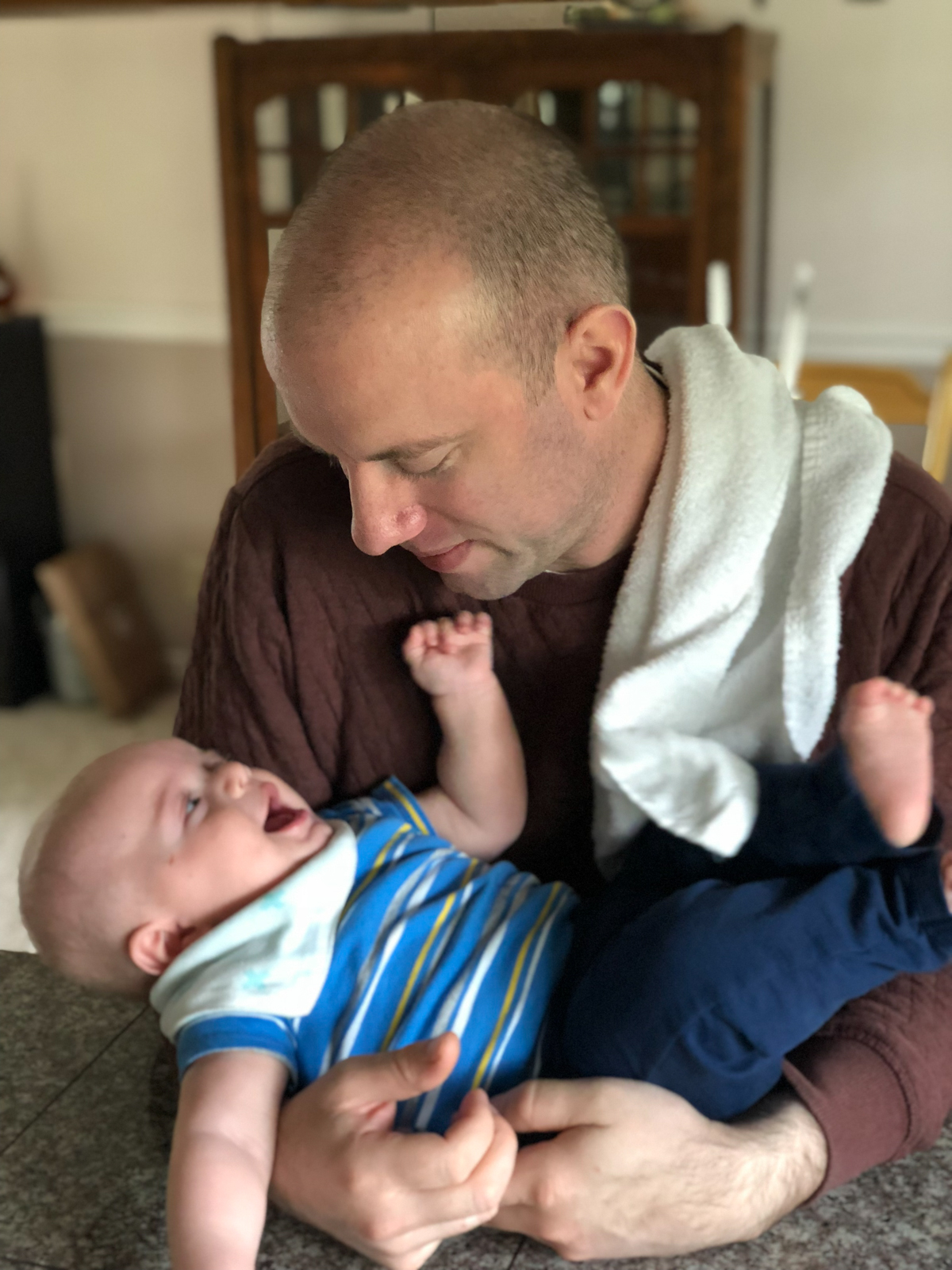 The house might never be as clean, our yard may never be in the tip top shape we had dreamed it would be. Our time is best spent in the daily raising of this kiddo, who laughs endlessly, is learning every day, and who will no doubt keep us on our toes. Now that he has learned to roll across the entire living room on his own… we really are in for it. 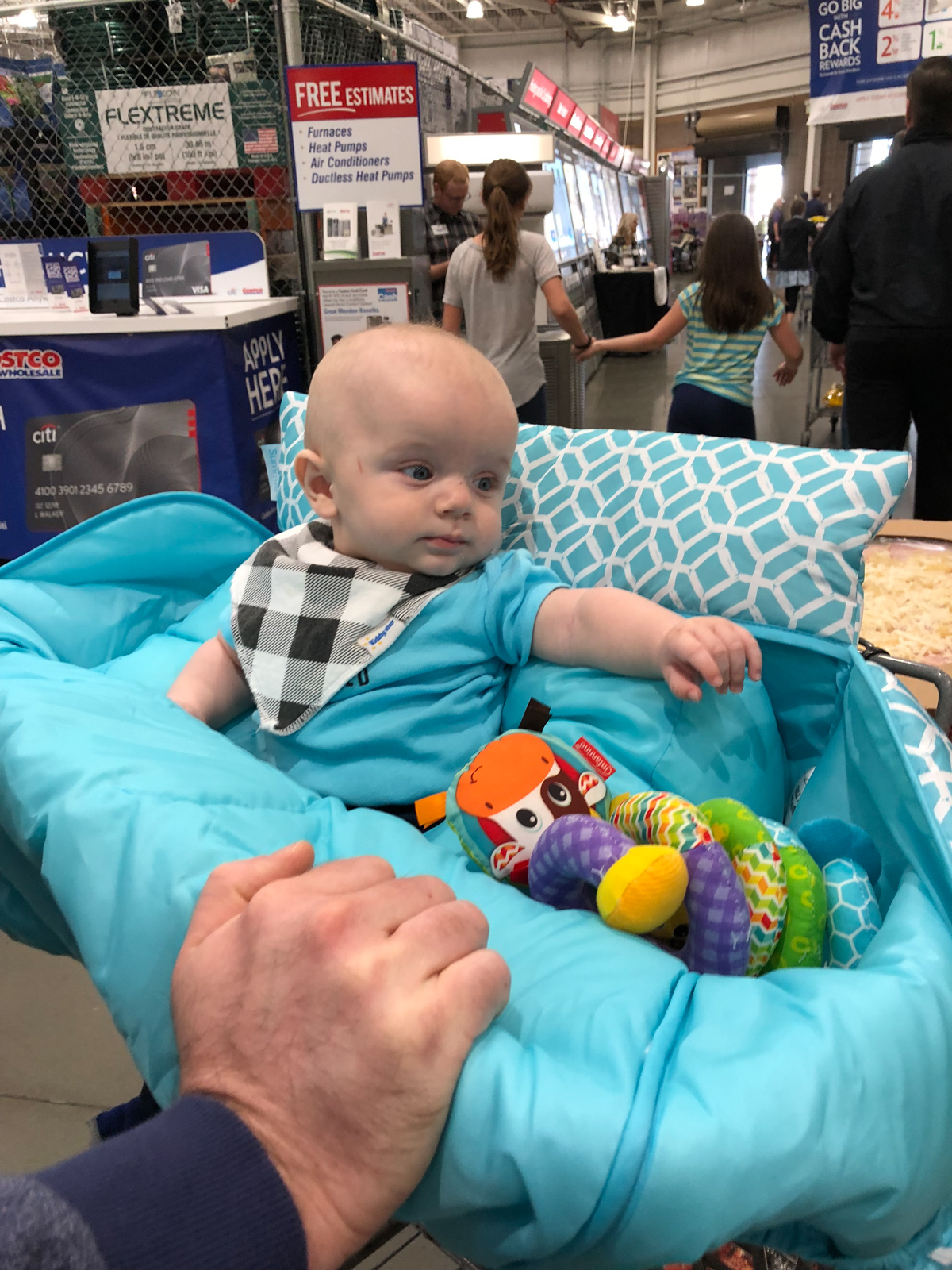