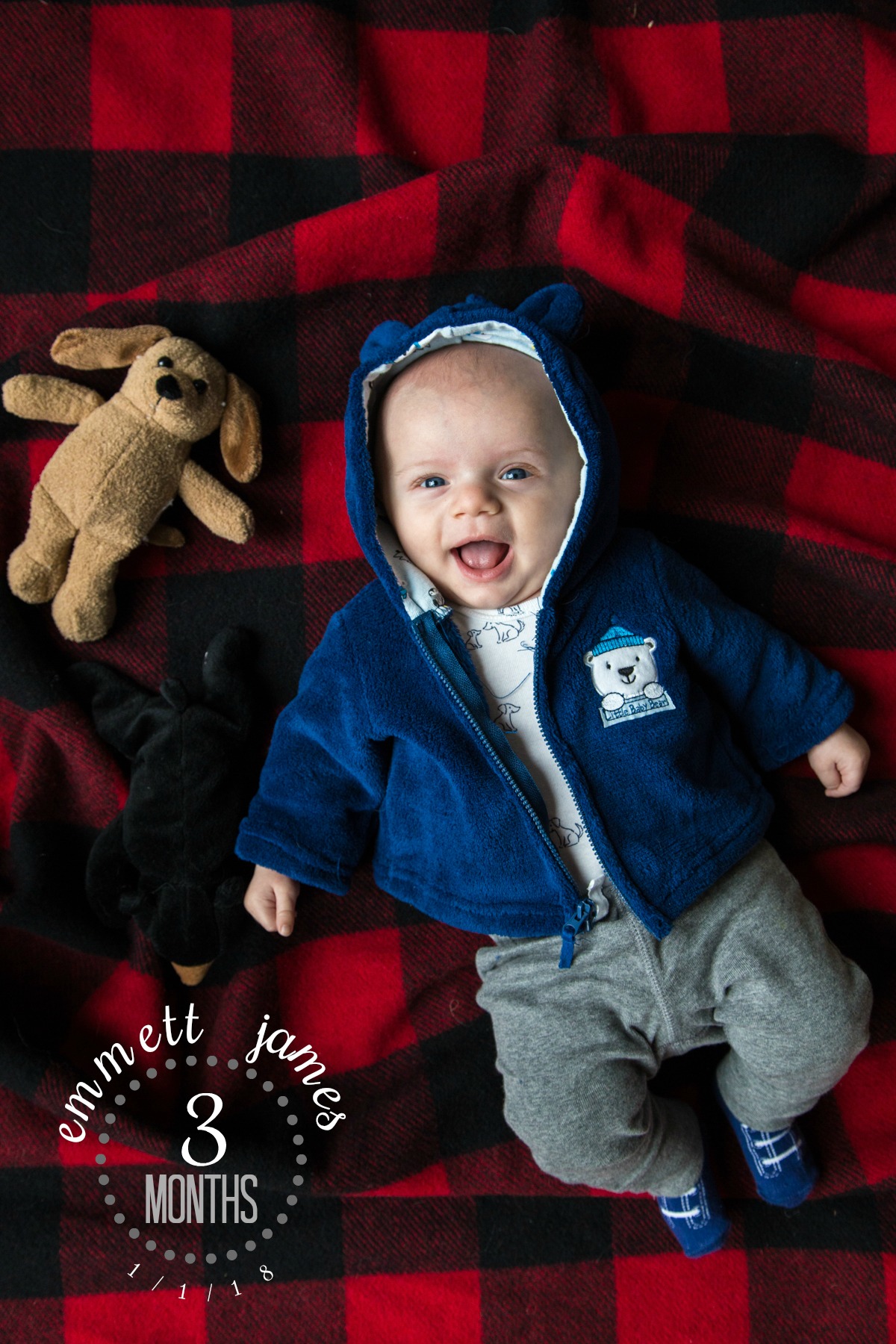 How have we gone a quarter of a year with this little guy? He’s changed before our eyes, like all babies do, but being our baby we pay special attention to it and revel in it to an unreal degree. He’s gone from a 7 pound 5 ounce little string bean, to a 14 pound chubby cheeked, smiling and wiggly baby with a glowing personality and love for cuddles. But only mom and dad’s cuddles. Blessings and a curse. Seriously.

The only part of me getting back into shape is my arms.

Tomorrow I go back to work, leaving my little nest that we have lovingly cultivated to be an independent functioning human, and I’m terrified.

I did photo updates to capture his monthly progress thinking, oh I won’t make a big deal out of it, just a little photo, and then got so distracted by our routine that I never posted them here! Hopefully you have seen them on Instagram and watched him grown in our daily stories, because that’s about the only way I can manage to update anyone! Thank goodness for instant sharing on social media, because putting him down long enough to turn on my computer, upload photos, edit them, hit publish and all that means it’s not time I’m playing with him, cuddling him, staring at his BIG steel blue eyes, and his one dimple on his right cheek and wondering if he will ever get one on his left side, or if that is the only thing that he might actually have from me.

Along with my big calves. 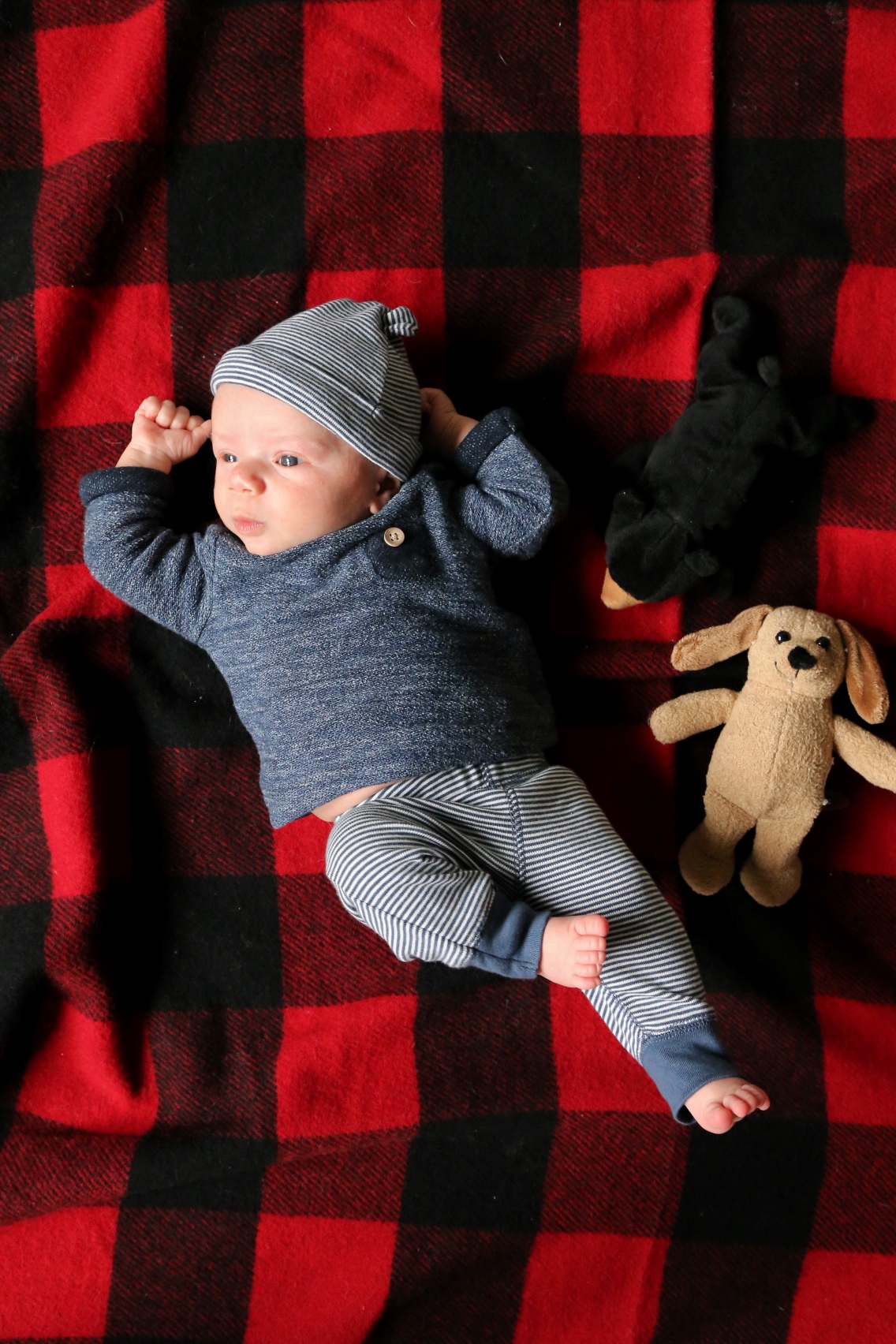 At one month, we were barely making it in the eating-pooping-sleeping every two hours phase. I never knew I could survive on so little sleep. Though what you consider survival at that point is very questionable when you basically hear colors and taste sound from the delusion you are living. But he started to shine so early, already knowing that Ben is the king of dad jokes. 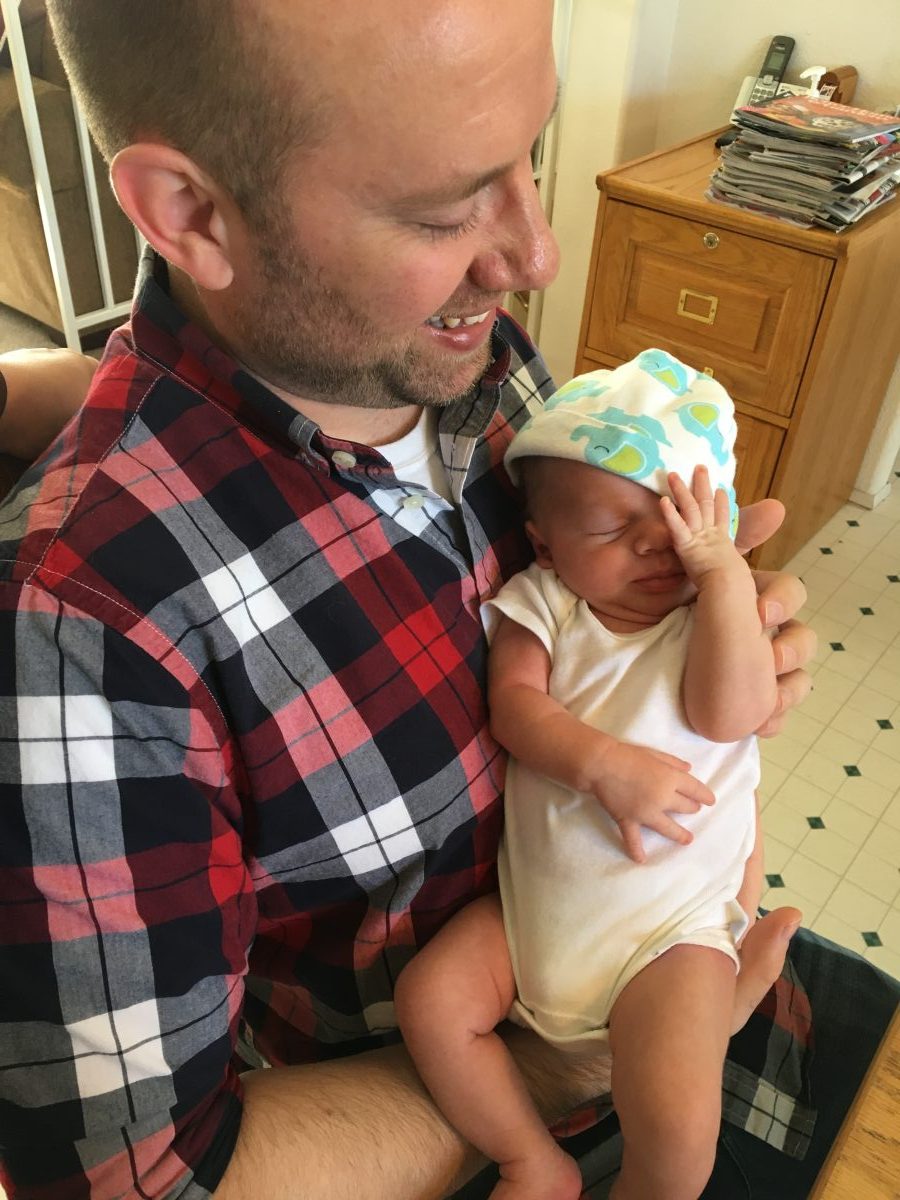 At three weeks old he was swimming in his newborn onesies and hats. Now? We’re up two sizes in everything, and his hats are almost too small. Cue the hormonal mom tears. His (let’s be honest, MY) favorite baby pants, the navy blue fleece ones with teddy bear feet are officially too small. Thank goodness the jacket will still fit a little longer – because I can not contain my love for the teddy bear ears on the hood.

Every time he woke up from a nap he was a different human, changing in only a few hours. Miraculous and heartbreaking all at once, when I just wanted to savor those little moments just a LITTLE longer. 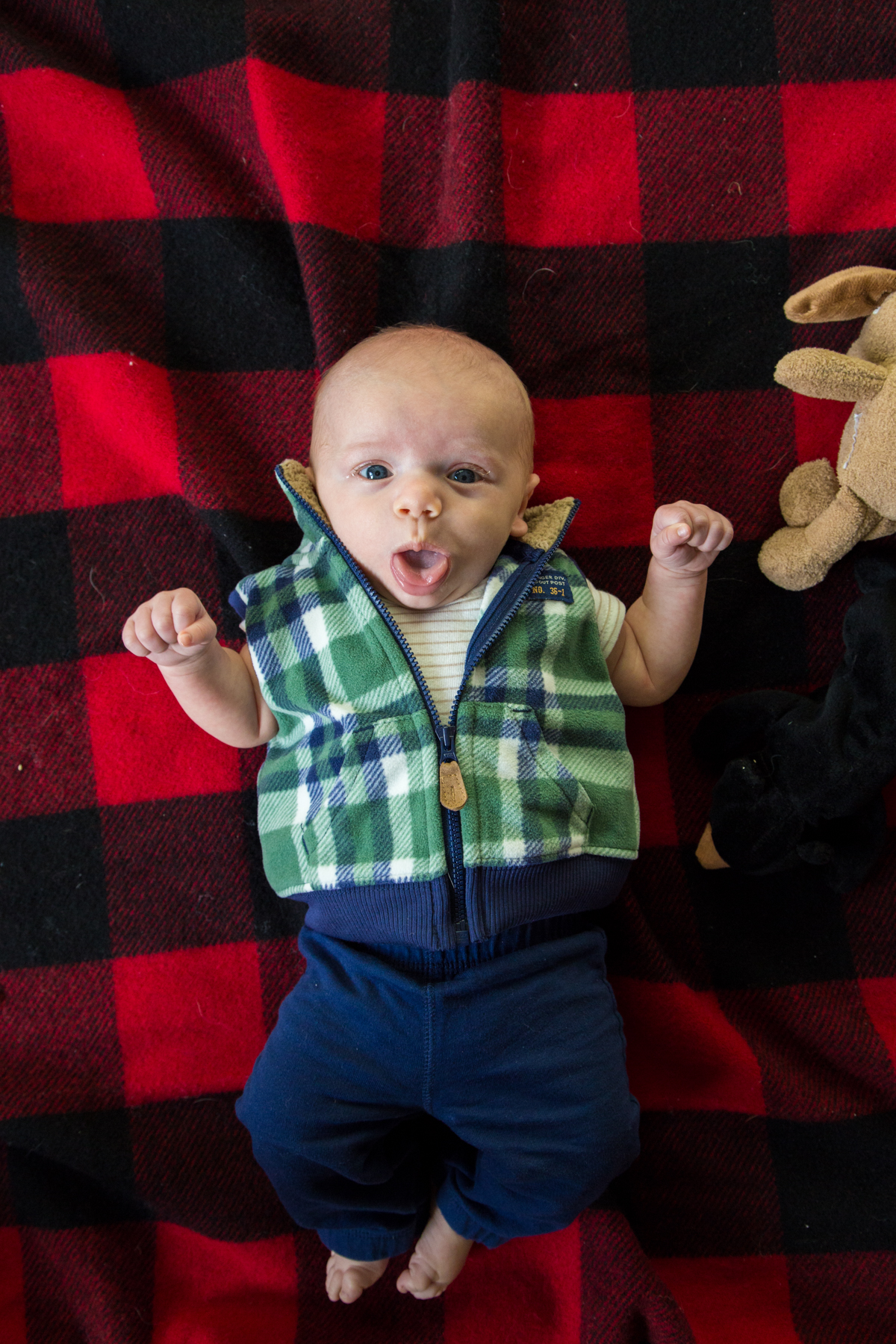 At two month, my cheeky monkey started to emerge, showing off his various personalities, still hating socks, and giving me the biggest gift of all, his first smiles. It started making all of the hard stuff (of which there was plenty) easier. Not easy, let’s not be naive, but easier. 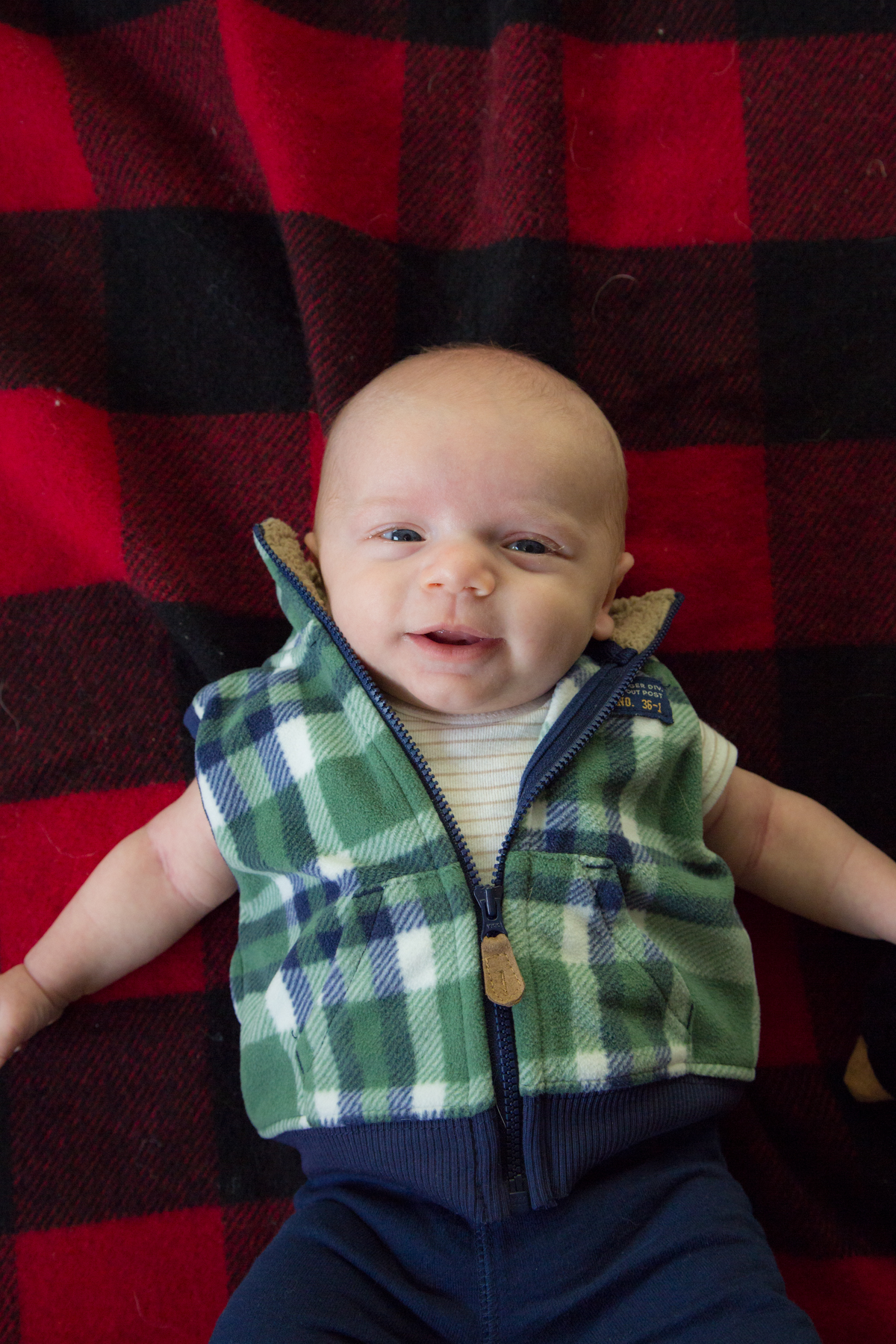 And his boo-boo lip has melted and lightened the heart of everyone who has seen it. 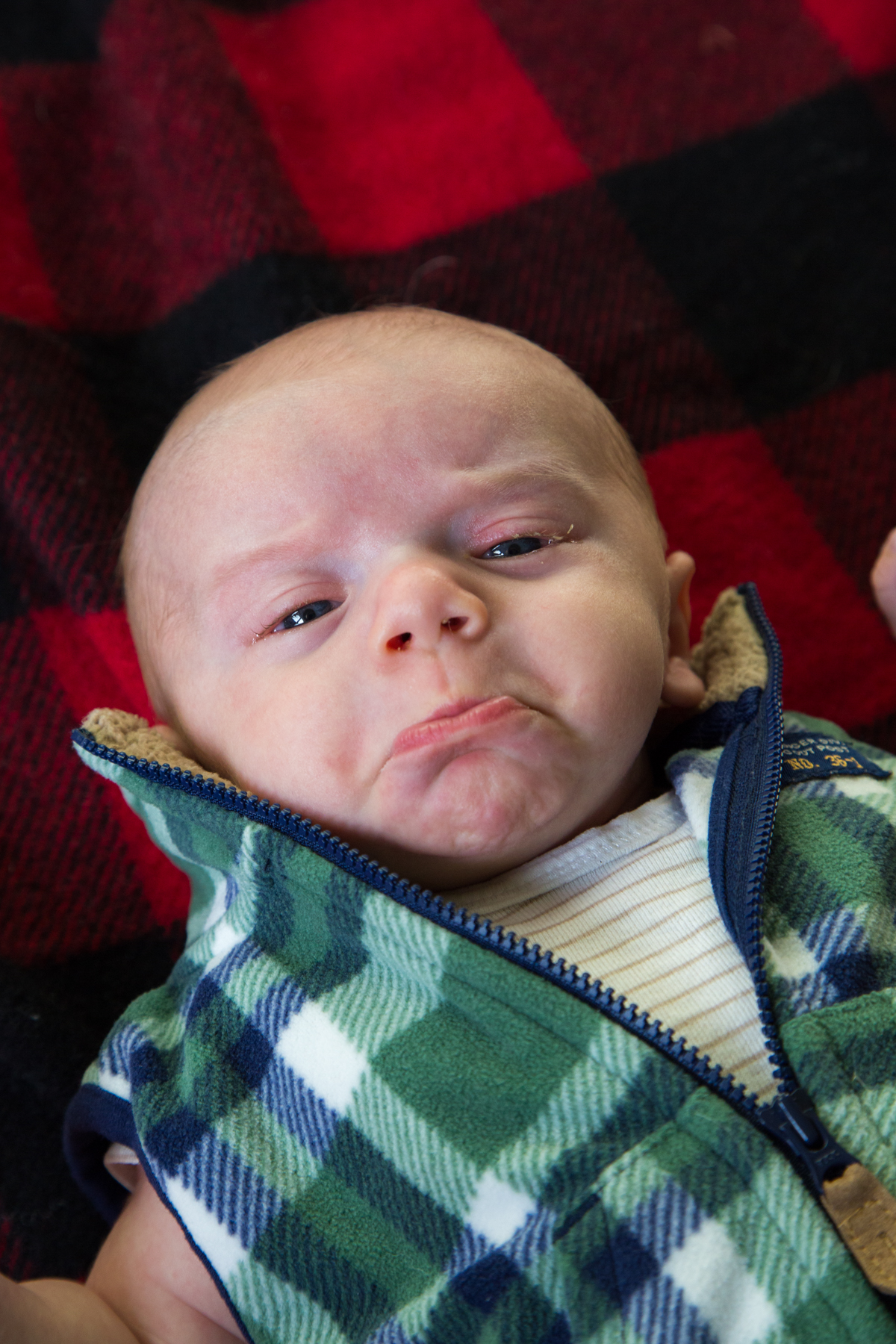 Because you can not take this face seriously. I just laugh and cuddle him extra hard so he knows I’m not laughing *at* him.

In this last month he has become super chatty, cooing, squirming, telling us his stories, and even trying to find his laugh.

He still hates not being held (or being held by anyone that isn’t me or Ben), and our adventures into daycare have been a complete wreck, leading us to cobble together our troops (grandparents and our dear friend Taryn) to watch him until a new daycare situation opens up in a few months.

And his very best Christmas gift to me? His first full night’s sleep since he was born. Making it 6 hours was a godsend, and now in a week he’s realized that sleep is one of the most amazing things ever, and bumped it up to 9 and a half in a night. I can’t even describe it. The last two mornings of leave I have been able to get all my stuff done, leisurely drink my first cup of coffee, catch up on email, and become – dare I say it – bored! I crave those little cuddles and time with him. 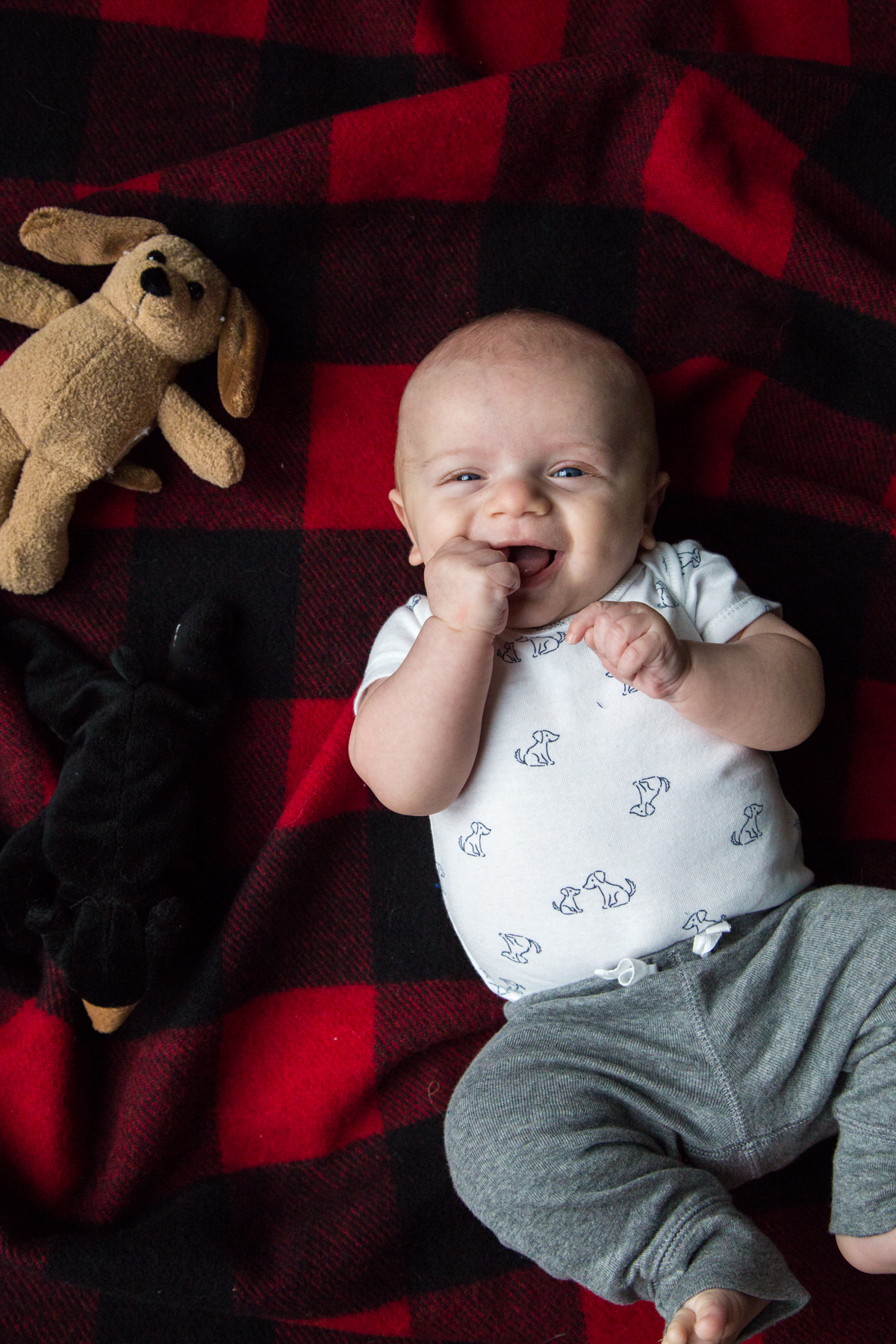 So far in month three;

Loves running his fingers through his hair while he is eating.

Hates mom dressing him up in eared hoodies and taking his photo. 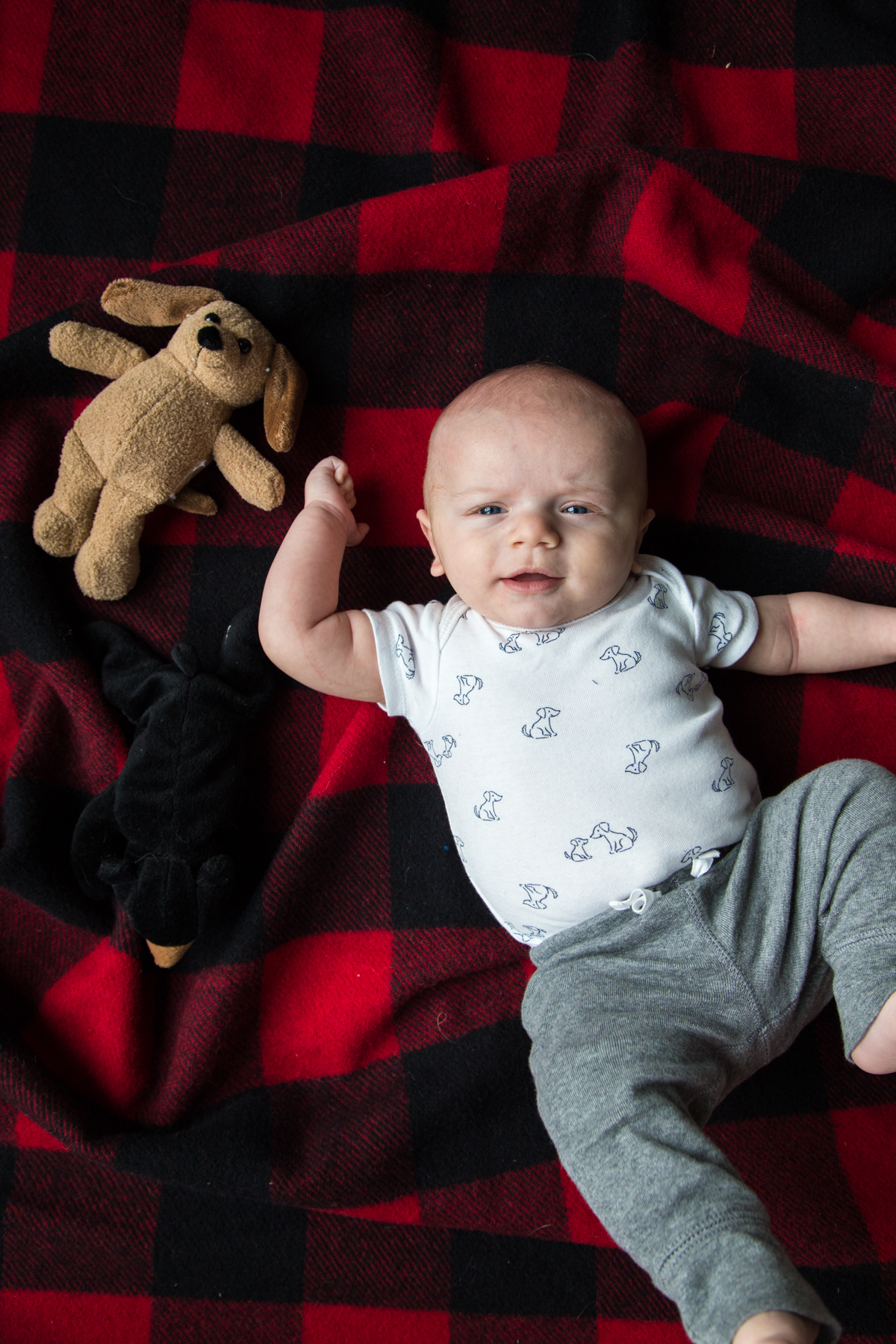 Loves morning cuddles, and if he is being held he will only tolerate being held upright on your shoulder.

Still doesn’t like his binky, unless he is omgsohungryguysdon’tyouevenknow?!

And he loves watching the ceiling fan, and getting kisses from his doggo. 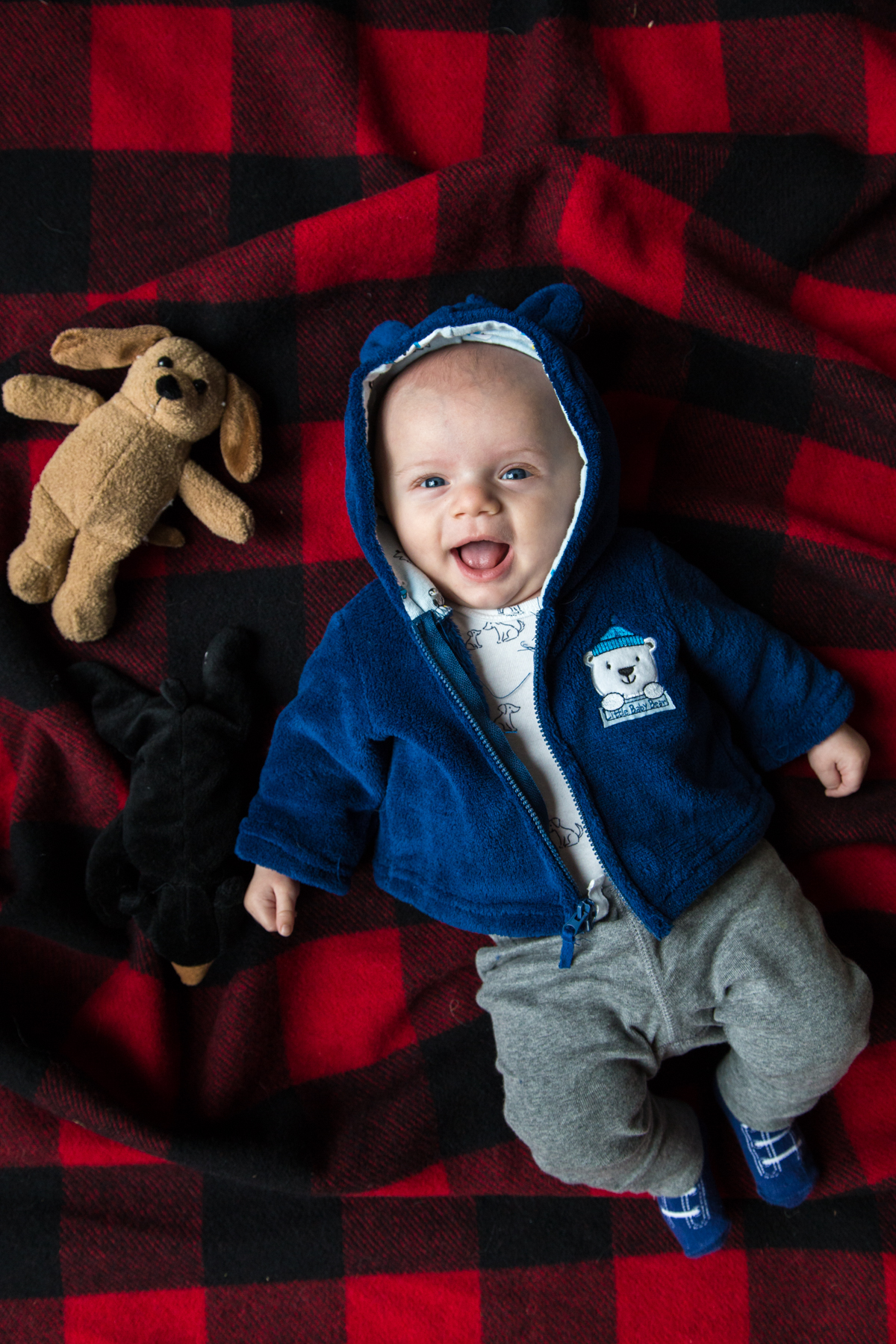 Every month has given us something new. I can’t wait to see what next month brings us.

Hopefully more sleep, and mom not being a weepy mess every day at the office. Just every other day.