We officially have a boy on the move! And one with a tooth to boot! One day, it’s just like he can do things. One day he is trying it out, thinking about it, the next he has found his way across a room. 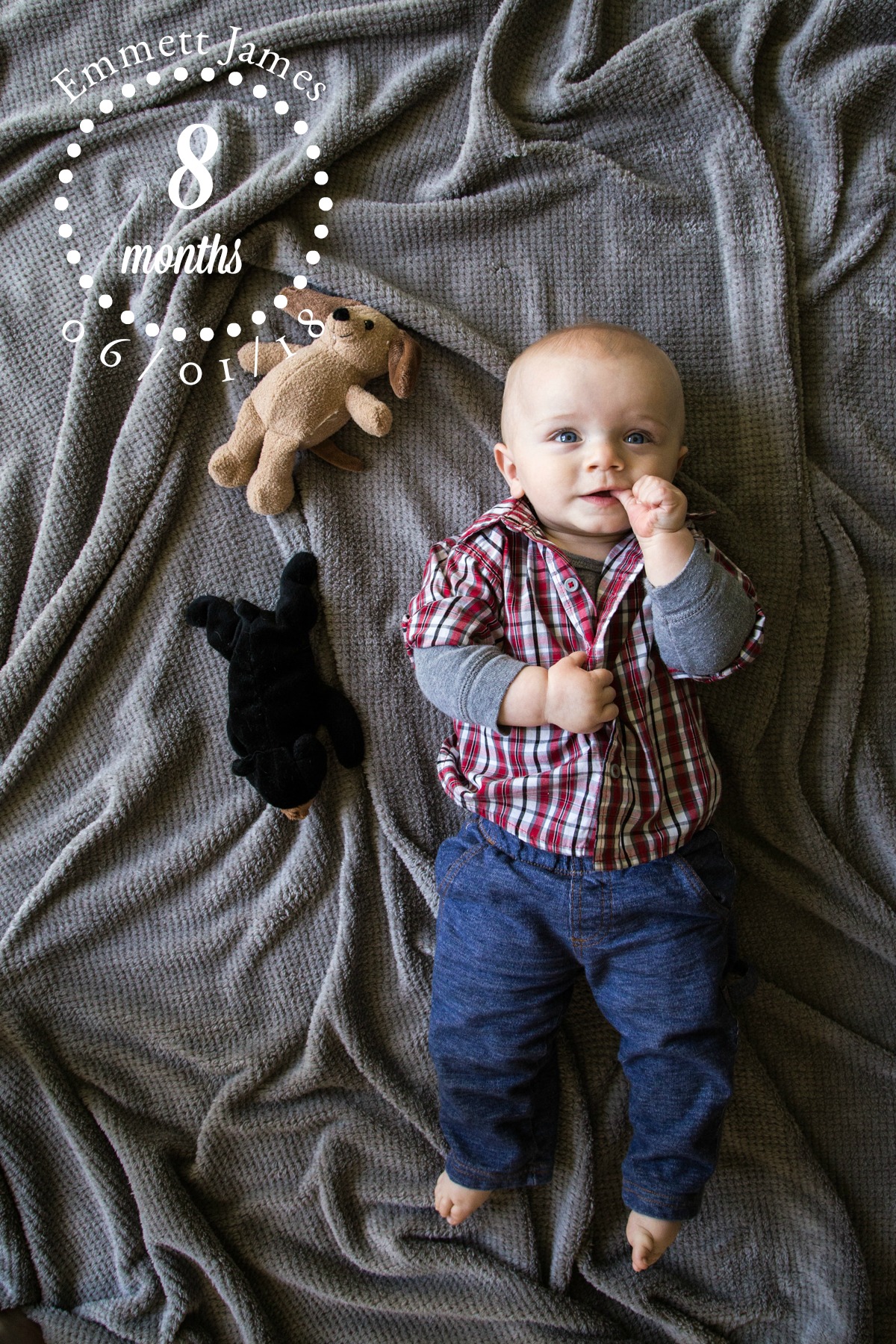 He has started daycare this month and already he has made new friends, bowled over the teachers with his million dollar smile, and learned lots of new things. His first day was more terrifying for myself than for him. When I first went back to work we had been planning on a daycare that was a home center with a mixed class of all different ages, with him being the only infant. As much as I had hoped it would be, it wasn’t the right fit and we had to find a new place. We did, but it also came with a nearly 6 month waiting list! So all spring we have rallied grandparents, from near and far, as well as hiring a nanny part time to keep Emmett home, growing and getting used to “new” people outside of just Ben and I who had been his sole caretakers from day 1. All of the growth he had with his grandparents made us feel so much more settled and ready for the final transition to daycare this month. As hard as it had been to have all of the family rally together, drive hundreds of miles every other weekend (in the case of Ben’s folks), I am so glad it worked out the way it had. Emmett had critical quality time with his grandparents, all whom adore him, and he got to mature a little more to be away from his ‘nest’ here at home. Our baby bird is out of the nest during the day, and I am so relieved and excited at how he has flourished. 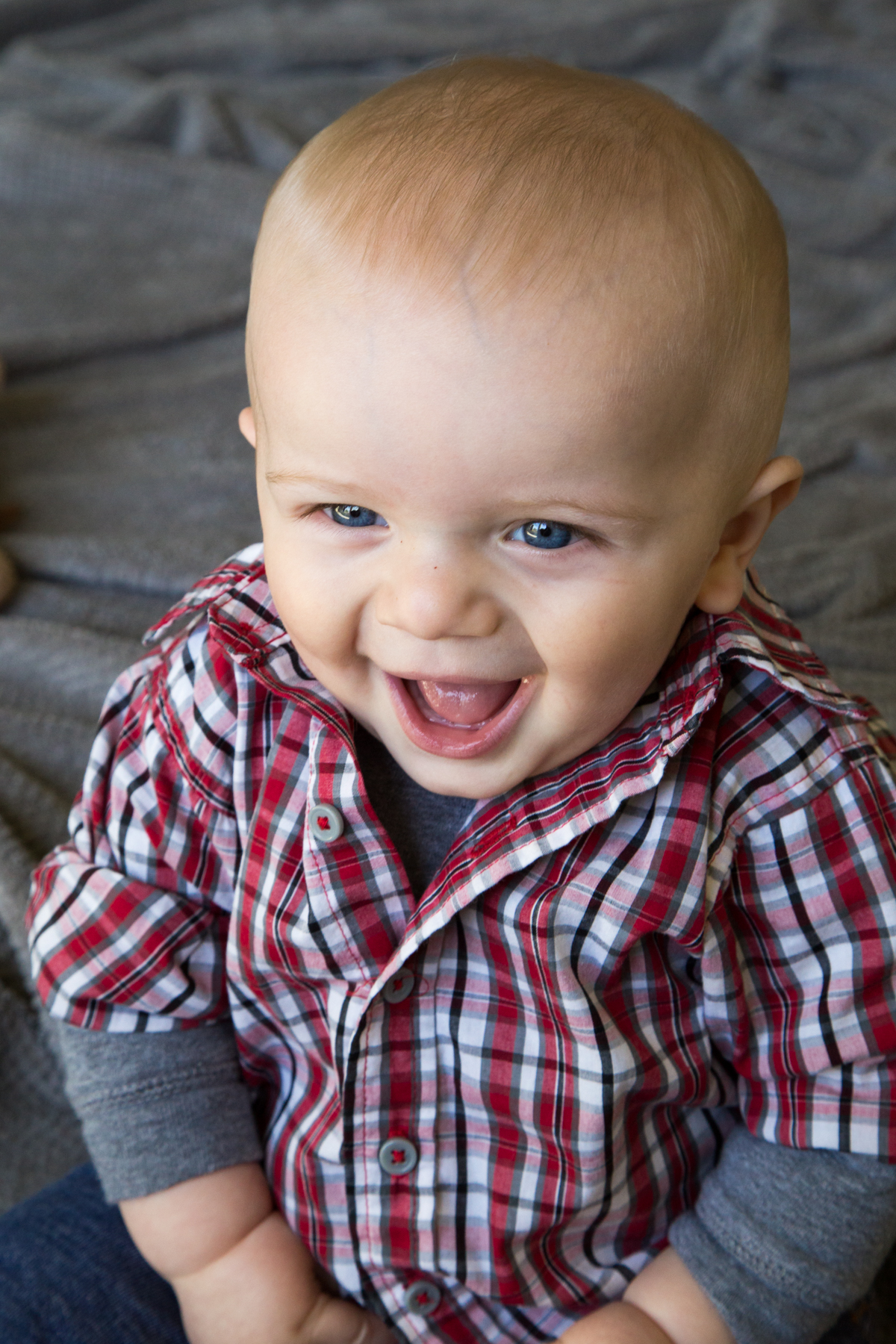 Emmett, ever the charmer, has his teacher’s wrapped around his itty bitty finger, and he even has a best friend named Addie. What I love most is that he has made friends with a little one whose name Emmett’s would have been if he had been a girl! But what makes “Addie” special is that it was my great grandmother’s name. So I will take it as a sign that they will be friends for a long time to come.

For weeks Emmett has been rolling, which transitioned to planking, shimmying backwards, and then getting up on all fours but never getting the coordination to piece together all the crawling…until Thursday. One day, he just figured it out. And in the three days since he is a boy really on the move. He knows now he can get that toy just out of reach, and Huck’s ears are ripe for the pulling.

Not all our days recently have been sunny, but that is more to do with the tooth that has come in, and the second on the way. But those pains are short lived, and blessedly he is still sleeping through the night despite the pain. He is 90% sunny, with the sass of his mama when things go wrong. But at least I know that there is some of me in that boy afterall! Otherwise, he’s all Ben. 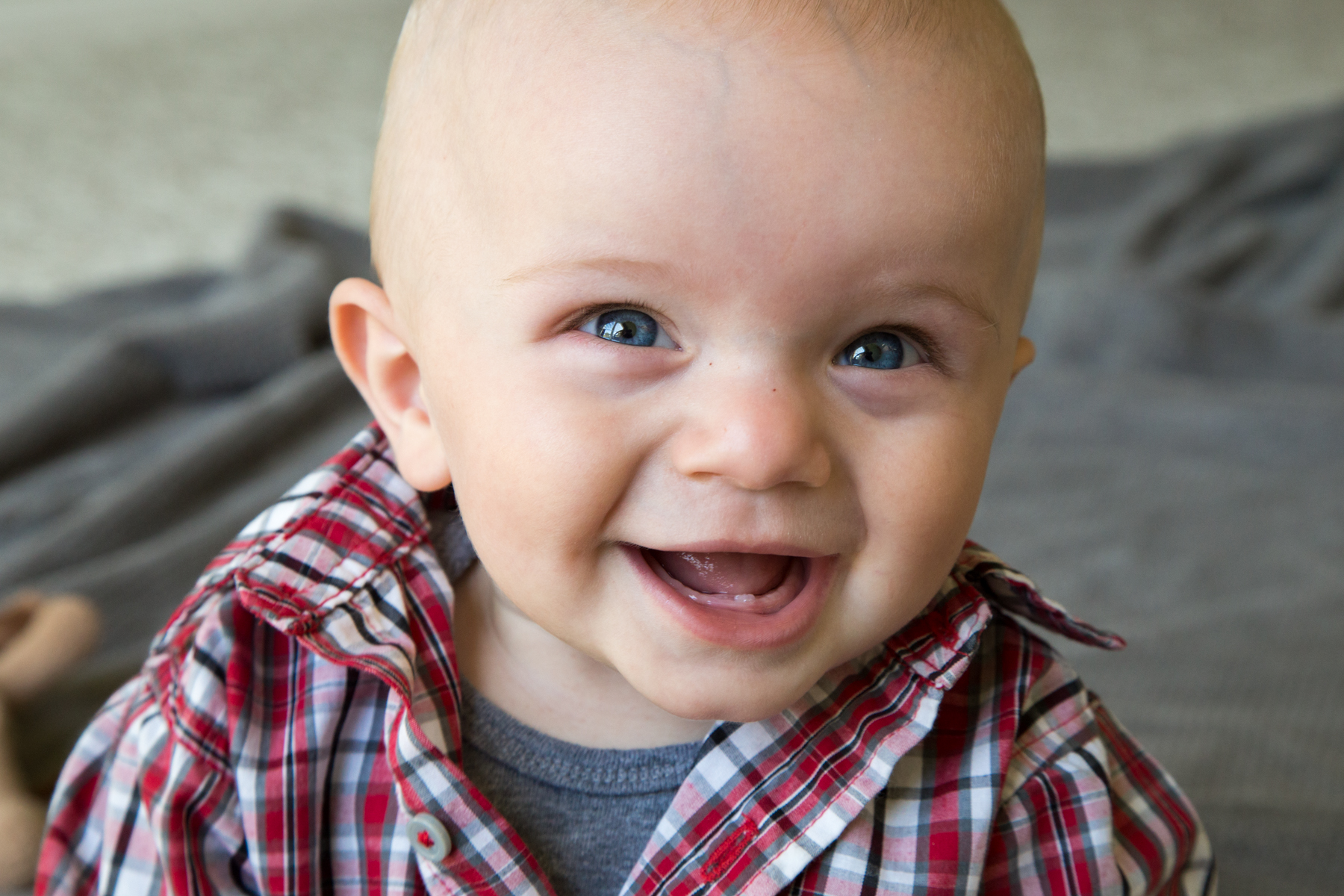 Emmett is still growing like a weed and getting in 12 month clothes. He’s eating three square meals a day, and wolfing down milk in between. After all these months, now that his teeth are coming in he has found the wonders of a binky, and is never far from his Wubbanubba. If his toys light up and make sound they are his favorite, but most of all, the dog still continues to be the most loved toy of all. Poor Huck.

We go on our first summer trip, and can’t wait to get Emmett’s feet in the sand and show him more of his home state as we roadtrip the Olympic Peninsula. We have only 18 summers, and I am determined to make the most of them with my little family. 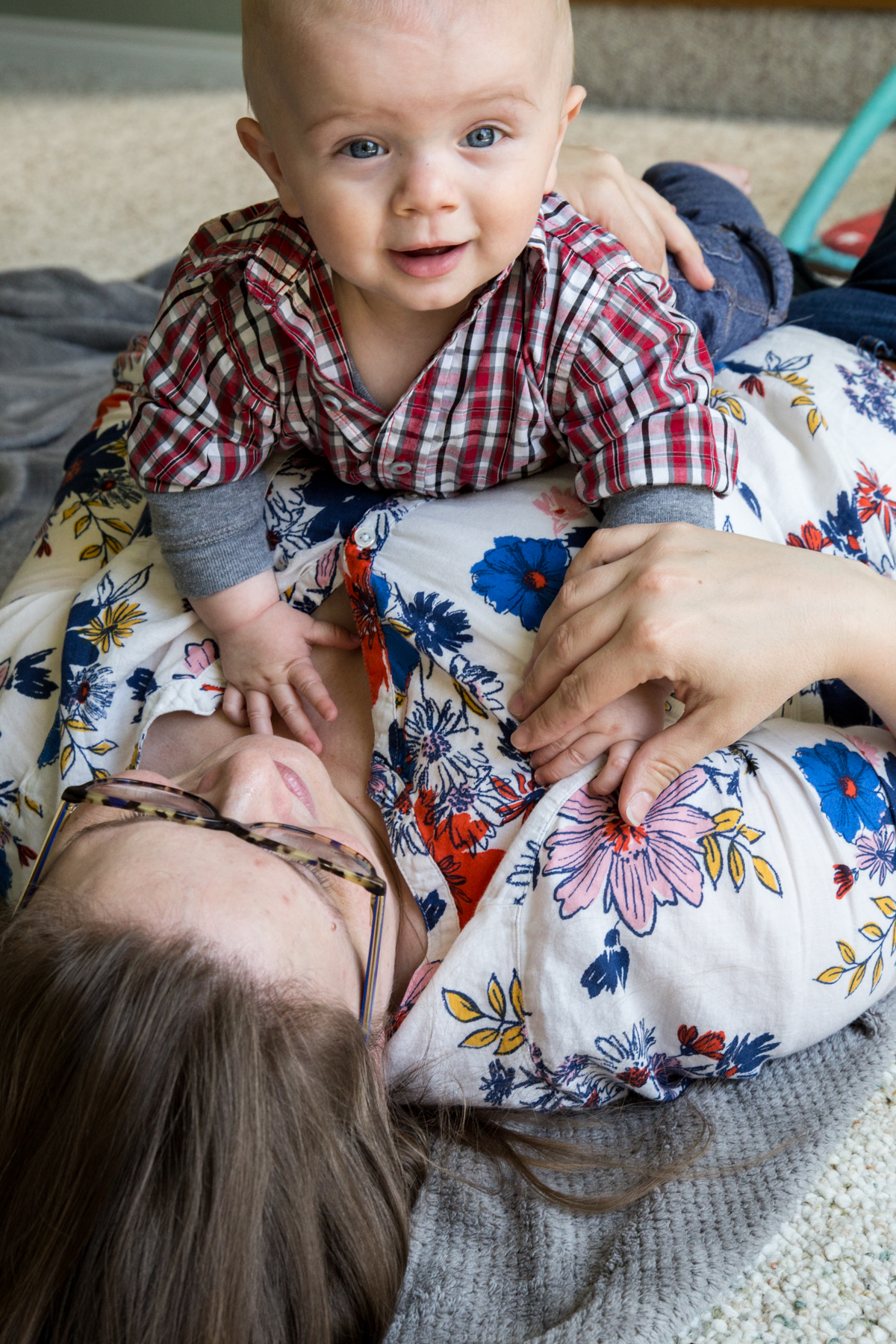 This month, Ben was home on Saturday to help me with this month’s photos of Emmett, which I am so thankful for. More often than not I’m doing them solo, before the light in our room is blown out, or in between naps, nursing, and cooking projects. But this day we got to do it together and at our own pace. The part I am most thankful for in this, is that Ben took charge at one point and grabbed my camera, snapping a few photos of just Emmett and me. So often pictures of me and Emmie are selfies, or me taking pictures of other people with him. But my favorite photo, the one that legit made me tear up, was this one. It always makes him giggle when we roll around on the floor, and Ben got this one in a million shot of us together. It is everything to me. I don’t care that my hair isn’t washed, there is no make up on, or that my shirt was one of my old maternity shirts (still perfect for those bloated days, of which there are many.) What I see, and hopefully Emmett will too someday is my hand wrapped over his dimpled little hand on my chest, how tiny he was, and that then and still he is the center of my universe, wrapped all up in my arms.

I read an article a year ago, and it pops up again from time to time, that moms are never in the photos. They are the ones behind the camera, making the everyday extraordinary and capturing the moments to remember. But I want that to change. I need that to change. My best friend just got through a critically high risk pregnancy, and for a moment her and I both thought of the what-if’s, the worst case scenario, and I cried. I panicked. For her, with her, and then for myself wondering how my “run of the mill” high risk pregnancy could have still ended up very different. What if there were no photos of me and Emmett to look back on. Would he know I existed, or would he know that I was even there, if I wasn’t captured IN a photo? Would he see the love, know it? Sometimes, no all the time, it has to be SEEN. We can’t always “know” we are loved, but we have to see it, and remember that it has always been there. I want him to see me in those photos, unwashed hair and all, to see that my heart is open to him every day and he is my world. And always will be.

So please, please, please, take the photo of the mom with her babe. Her little one won’t see the unwashed hair, or the yoga pants. They will see the smile, see the care, SEE the LOVE. Make sure her memories aren’t just selfies. Take those two seconds for her,  because the odds are she won’t do it on her own, to let her be with her babe, and capture a split second of an eternal love. Something her and the littlest one deserve to remember. Forever. 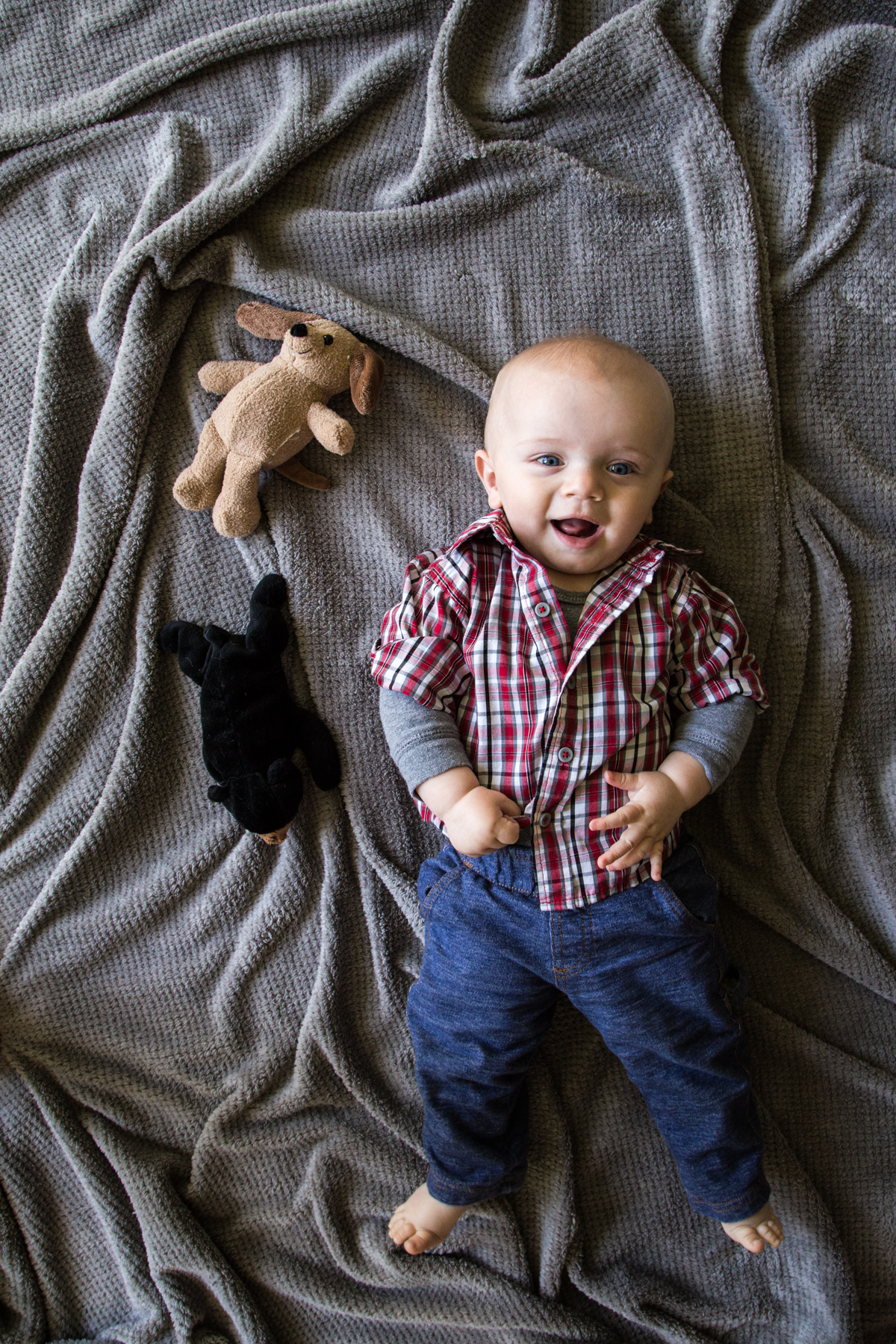