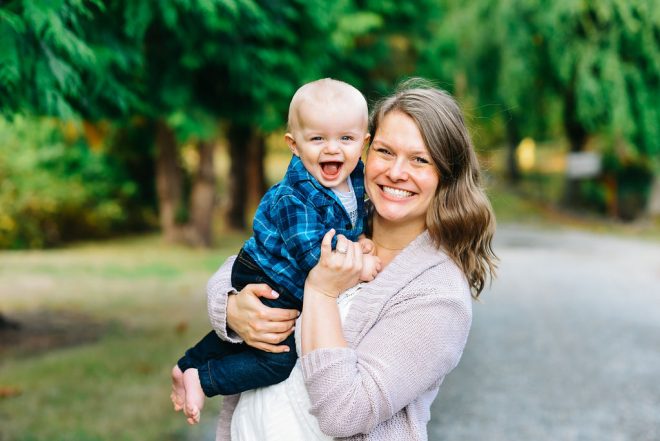 It is officially here, and I can’t bury my head in the sands of denial any longer! My baby boy is officially ONE! He woke up and looked like a little boy, more than a baby. His rolls are disappearing, but his soft baby skin remains. His laughs are all that much boisterous and his curiosity has grown to match his energy. He touches things, moves them, wanders and explores. He runs himself into exhaustion and then just wants to crawl into my lap and cuddle. The transition of life over this last year has been a whirlwind, and through all of the joys, hardships, feelings of defeat I have faced, and victories we have both achieved, I have found joy in the love I have of this little life that has been created and discovered how privileged I am to be his mom. 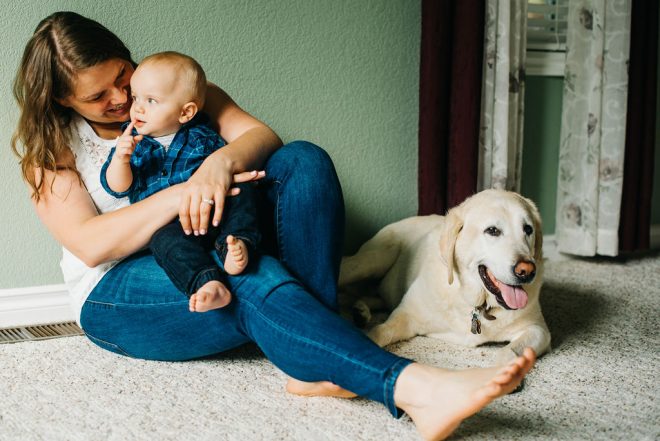 I spent Monday, his 1st birthday, glancing at the clock thinking back to where I was at that exact moment on October 1st. At 7 am I was just getting ready to push. At 10am, still pushing, loaded up with meds, writhing in the most primal pain, terrified I wouldn’t be able to do it, I wouldn’t make it. At 12:47pm I distinctly remember looking at the clock and thinking to myself, they were vacuuming him out, the room was filled with blurred out faces, nurses who I couldn’t have done it without, but who were prepared to move me into an operating room at a second’s notice, all of us praying, and then at 1:16pm, he was placed on my chest, with his right ear on my heart, where one year later, he still loves it to be. 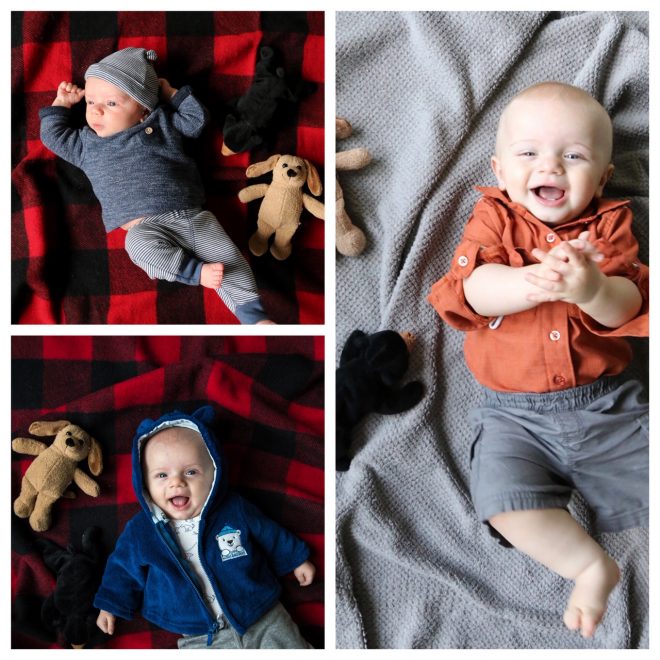 One year later, he will fall asleep with his right ear on my heart, and it is magic. All those times I have been able to look down and kiss the little ducky fuzz that grows on top of his head instead of a full head of hair. It’s transformed slightly, it’s longer, but fine, and almost translucent. And in those moments, I wish I could bottle them up to savor them from time to time, like a drug when you just need a little hit of the good stuff. Let me bottle that sweetness of my baby boy.

In the last year, I have felt physical defeat, in recovery from my birth story, as mom’s have their own story separate from their babies. I have felt little victories as I transitioned into motherhood, was sleep deprived to the point of delusion, and scared – convinced that I would have to take him to the emergency room – for a simple cold. But I have felt indescribable, transcendent joy when he first smiled at me. My heart exploded when he laughed for the first time, and relief when he slept through the night in his own room for the first time. I have been there for all of the firsts.

I have marveled at his curiosity, reveled in his joy, and soaked up every snuggle, even when I have tried my best to get things done around the house, forcing myself to slow down to savor him and his littleness just a little more.

It is a dichotomy of myself to be a mom. To be my own self, and someone else’s world, is a balance that will never be struck, but a joy nonetheless. 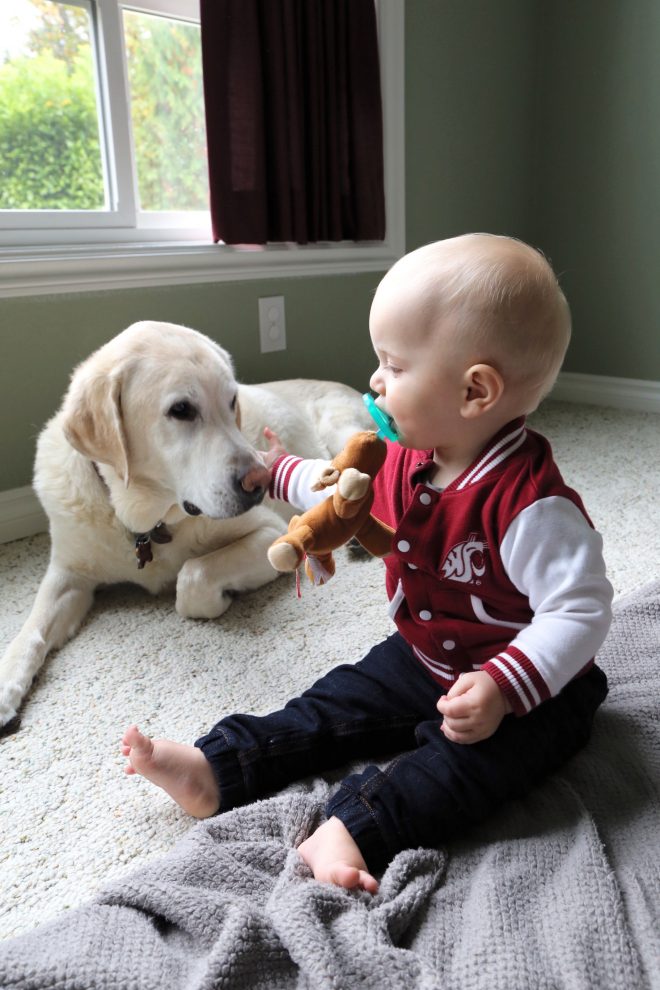 And in that year of indescribable moments that are so special to him and myself, like our own inside jokes that only we will understand, I can’t wait to see what our next special moment will be.

In the last month, Emmett has become more confident in himself, more curious, quicker on his hands crawling everywhere faster and faster. He stands up and reaches to the things he shouldn’t, always with a cheeky grin and giggle. His laugh is louder and more boisterous, with a growing sense of the hilarity of our daily lives and picking up on cues and games we play. His diaper wipe box is a particular favorite, with its spring loaded lid that he slams shut and tries to open, laughing every time we play with it. 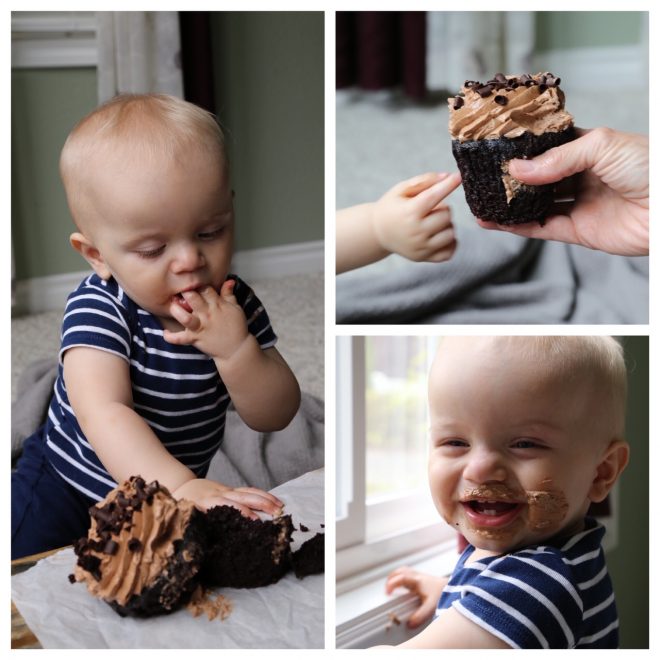 Along with turning one, he is also beginning the transition into the toddler room at daycare. This will be a slow transition for him, from the quiet environment he was used to, to the more uproarious, busy, and stimulating rooms. Emmett has always been a sensitive boy, content with quiet, and not a lot of loud noises. With just Ben, Huck and myself, our lives are rather quiet, although there is always sound in the background or us talking to him through the day. But with more nimble, active, and curious little adventurers around him, he is unsure, and needs to be hugged, and cuddled until he is comfortable to make new steps on his own. His teachers absolutely adore him, and I know they will miss him dearly when he is not in their class anymore. But thankfully he will see them frequently. 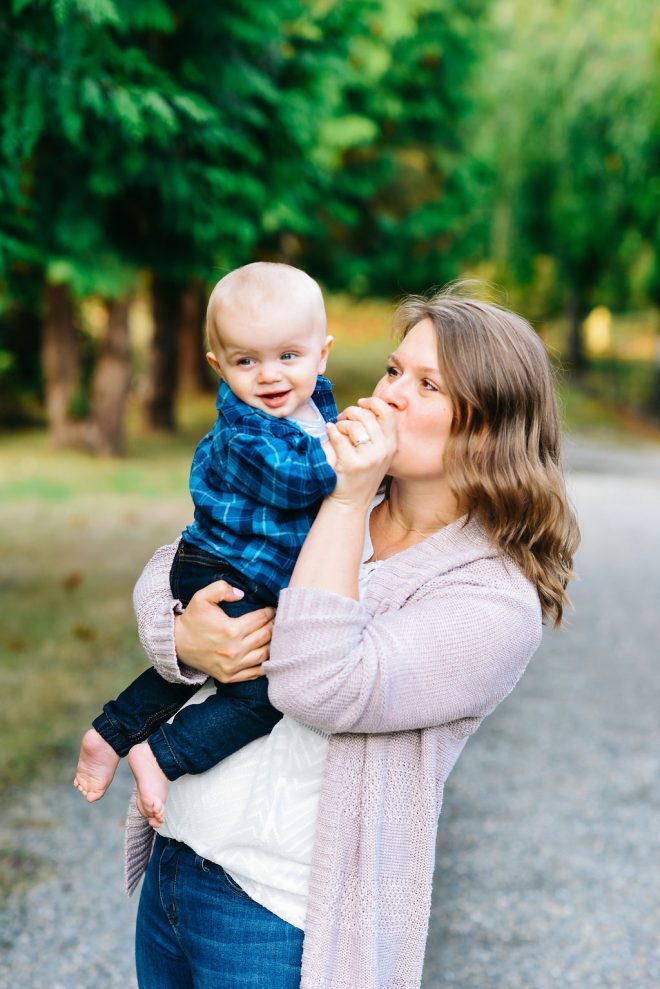 The last couple months with food was a transition, learning solids and he is now very confident in his eating ability. Green beans, mango, and even scrambled eggs are a huge favorite! Pancakes are part of our weekend rotation of food and he gobbles them up. Since my supply of frozen milk is dwindling, we have started adding whole milk to his bottles to get him used to the toddler room where he will need to be on cow’s milk. I have stopped nursing almost entirely, and have gone down to pumping once a day. I have mixed emotions, as the time we had together is not physical attachment anymore, but I am also proud that I was able to make it to the one year mark – my ultimate goal. The time I get back in my day is a blessing to me, to feel like an independant human again, somewhat autonomous, but wanting that closeness we shared. Our bedtime routine of a bottle and snuggles satisfies my need for his hugs and I still marvel that he is content to fall asleep in my arms, knowing he is safe, and loved.

My hopes for him have remained steadfast. That he have a life of constance, surety, adventure, and love. That he be strong in his love, his beliefs, his kindness and resolve to make a positive mark on those around him. And to stare straight into the winds and march forward knowing he always has me behind him.

What more could I ask for as a mother, than to have the complete trust and love of my baby? It is where I draw my strength. From those tiny hands and piercing blue eyes. Our lives over the last year have transitioned beyond measure, and will continue to do so.

But he will forever be, my baby boy. 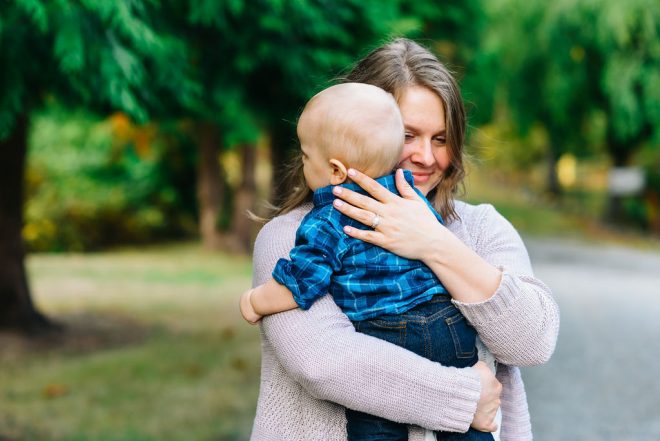