Easy Italian On a "Summer" Evening

It’s wishful thinking that it’s Actually summer here in Seattle at all. But supposedly, it is. Sunny and high 60’s is close enough, that means veggies are in order. And cheese.

I’ve been growing basil in my little apartment garden which is now big enough to start using. Let me tell you that it smells amazing.

After tossing in three roma tomatoes, about 3 ounces of mozarella cheese cubed up, and a handful of basil rolled up and sliced nicely it was nearly ready to go.

There should be a note made, that I took the goop out of the middle of the tomatoes and used only the meat of them. Drizzle a little salt and pepper over them to rid them of all the extra moisture that would otherwise water everything down and you’re set. (The salt will do the water extraction, the pepper is just for well, pep)

For bruschetta, I did go to the store and buy a nicely crusted baguette.  Crusty, softy and light on the inside. 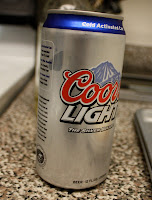 Bruschetta is traditionally grilled with olive oil and garlic until toasty. Right now my olive oil is running a little low, so I subbed it with butter. Fry them up til they’re as golden as a grilled cheese toast and you’re ready to top them with the gorgeousness that is your tomatoes n mozarella.

Before you start the next step, crack a beer. Unfortunately Coors light was all that was left in the fridge by Ben… This was also an unfortunate choice on my part to consume any of it. Reminder to self: I’m not in college anymore and can’t drink cheap beer.

When your bread is all hot and toasty, top with the colorful topping and revel in the glory.

But the best thing to do before you consume, is to add some sprinkles of balsamic vinegar.  You will be thankful later.

And now, for my next cooking project of the evening…I have to get on with my cupcake and frosting experimentation.