Blackberries are coming on strong, and nectarines are perfect for picking – this classic blackberry nectarine pie is the ultimate seasonal pie!

It’s not often you get to share in someone’s special day like Ben and I did last weekend. It started off a year ago when I was working on an old construction project and bringing in pie after pie to the construction trailer and pawning them off on any one who would eat them. (The blessings of working with men.) And one of those days, my project manager came in and mentioned his daughter was getting married and well, she wanted pie.

I happily obliged. 20 pies didn’t seem like a big deal. It could be done. Even in a one bedroom apartment…

Top of the bride’s list was a classic blackberry nectarine pie, along with strawberry rhubarb crumble and classic apple. What a list. 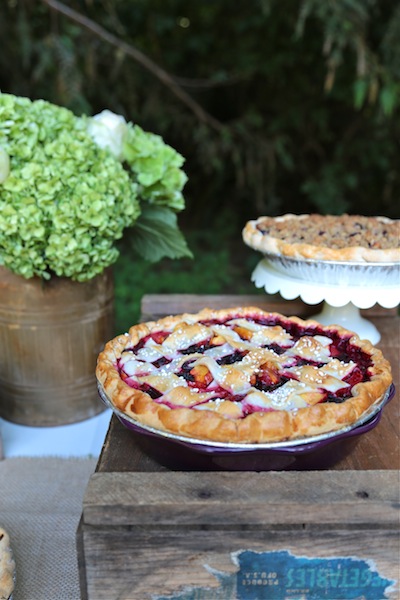 Work started well before the wedding, trying to make and freeze pies ahead of time to save me time, and my sanity. Ben, the best sous chef in the world, make the endless store runs to replenish the lemons that would inevitably run out, and additional apples just to make sure we were covered.

By Saturday morning we were 20 pies deep, coated in flour and managing two pies in one oven and one in our Breville Smart Oven sitting out on our deck in attempts to reduce the heat filling our apartment. Huck, as usual, was performing his duties as floor sweeper with impeccable precision. 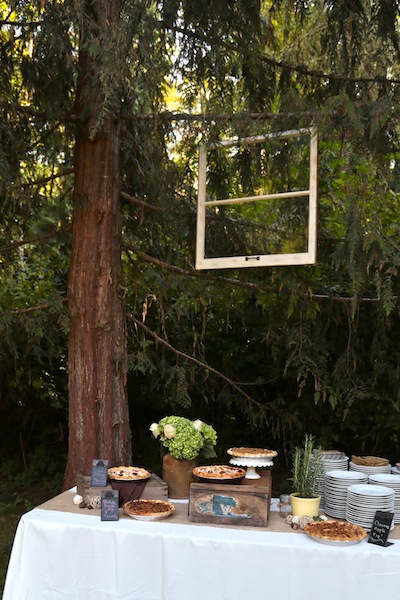 After we were done with the baking, it was transport time. And the single most nerve wracking experience for any caterer or cake decorator. That’s when I handed the keys to Ben. I’m not exactly known for my light foot, and with this much on the line I was sure I would cause something catastrophic to happen. So we loaded up all the pies in the Subaru, and made our way to the ferry to head to Whidbey Island.

In the whole time, there was only one pie that put up a fight onto Ben’s nice dress pants. But that was a small price to pay for 20 pies. The guests moved past us and our pie table ooo-ing and awww-ing, and definitely drooling as they passed by.

The day was a perfection, and the bride’s sense of style shown through. 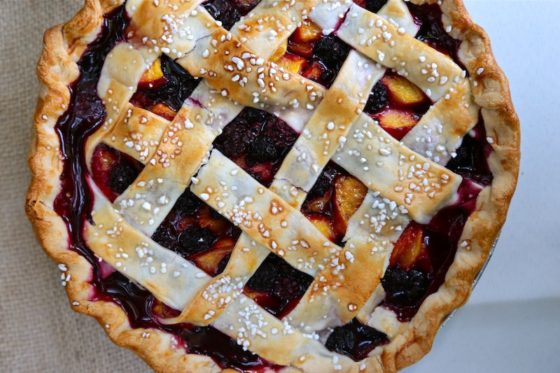 Once the vows were done, the toasts were said, and dinner was finished it was time for pie – and you would never imagine the sight at 150 lined up, pie hungry guests. Well, 149 – because of a near row that almost happened with one guest when they threw some anger my way at my pie cutting and serving skills… after days of constant work, being told to “try harder” isn’t exactly the most heart warming of sentiments to hear. BUT, seeing guests coming back for seconds and thirds of pie? Now that’s the best compliment any baker could ever get! 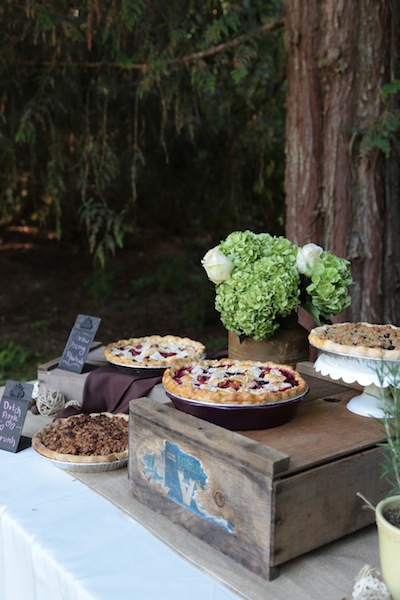 The bride and groom threw a spectacular bash, with their closest friends and wonderful family. Seeing people at the crux of this new chapter in their life is so special, and all of the best things are in front of them. As Ben and I come up on two years of wedded bliss, RN’ing, working, lazy nights and new experiences, road trips galore – there is so much hope and excitement to see two other people embarking on this great life adventure. I couldn’t be more excited and honored to be a small part of their big day. 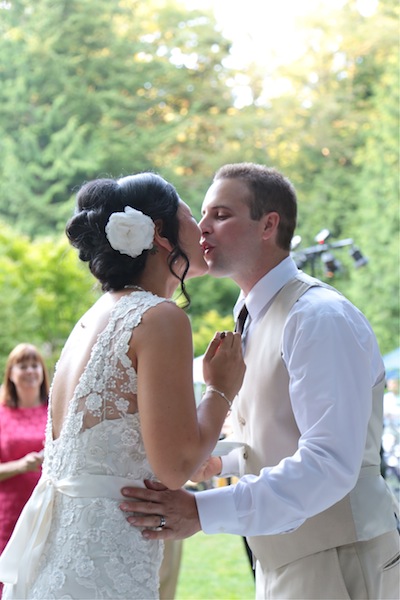 But really, 20 pies in a one bedroom apartment kitchen? That’s never happening again. 😉

Use seasonal peaches or nectarines for the perfect summer treat!

Preheat oven to 400 degrees. On a floured surface, roll out two pie crust rounds to fit a 9 inch pan. Fit one crust into the bottom of the baking dish. Using a pizza cutter, cut strips out of the other crust. Set the strips aside to create a lattice top for the pie.

Cut the nectarines into a large bowl. Sprinkle nectarines with sugar, cinnamon, lemon zest, lemon juice and Clear Jel or cornstarch if using. Fold all the ingredients together. Pour mixture into the chilled pie crust. Top with 1 cup of blackberries.

Using the strips you cut out, create a lattice top for the pie. Cut off the excess edges of the strips that fall over the edge of the pie. Fold and roll the hanging upward and secure on the rim of the pie dish. Crimp the pie crust edges decoratively.

In a small dish, whisk together water and egg to create a wash. Using a pastry brush, brush the exposed pie crust and lattice top with the wash.

Place in the oven, on a rimmed cookie sheet to avoid spill over, and bake for approximately 50 minutes. Remove from the oven and place on a cooling rack to cool at least three hours. Slice and serve.

This site contains affiliate links, if you make a purchase through them, we receive a small commission.
Baking Dessert Fruit Homemade Pie Recipes Wedding