After a hard day of fishing, chopping wood and drinking a beer or two (because who are we kidding, we’re lumberjacks), we got to the hardcore cooking of our weekend adventure.  And let me tell you, there was nothing healthy about it. My heart may still be beating a little slowly a whole week later! How do Southerners do it when everything they eat is a shade of gold and crunchy? Wall-E is coming to mind again, but we lack the fancy color coordinated leotards and hoover crafts.

Either way there was some interesting and previously undiscovered gastronomic activity taking place at the Groce household. 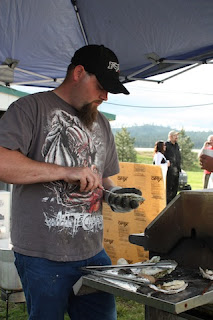 Tom shlepped a bag of oysters from the coast and grilled those babies up to delicious delicious perfection. 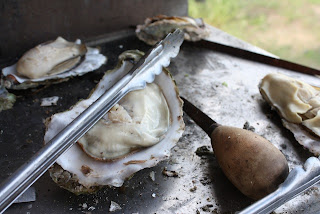 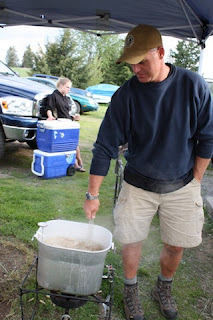 Chance manned the deep fryer where his loving girlfriend Erin coaxed him into frying up anything she could get her hands on. 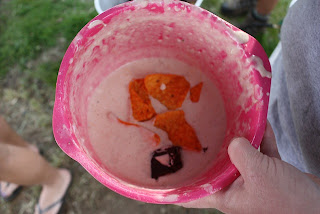 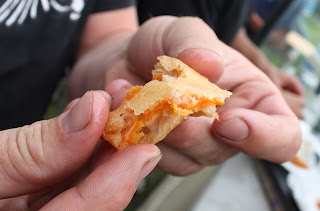 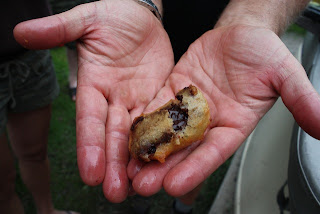 Brownies, and wait for it….M&M’s.
Are you feeling that heart attack coming?
Did I mention it was (despite the unhealthiness of it all) kind of spectacular? It was.
In between all of the frying, I was dying to get my bottle of Cupcake Red Velvet wine open and not one single person in that household had a corkscrew. How many lumberjacks carry knife? The answer is, all of them. But still, not one had a corkscrew on their knife. Useless. Until I saw this trick… 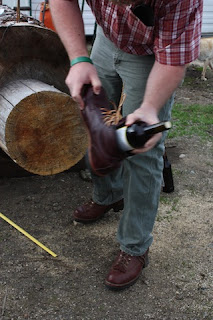 Redneck bottle openers! Never before had I seen the bottle in the boot trick. And it almost worked, but someone stopped Josh before he became too overzealous and broke my precious vino. 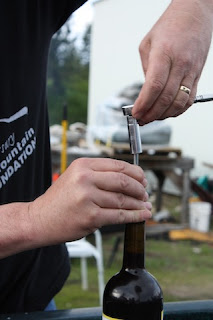 So, Rick whipped out the trust ratchet and took over. 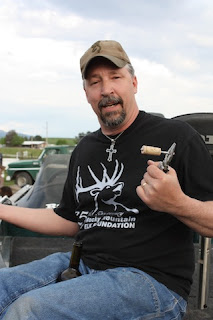 Viola!
So with a paper cup full of Red Velvet in hand, I went straight for the desserts. 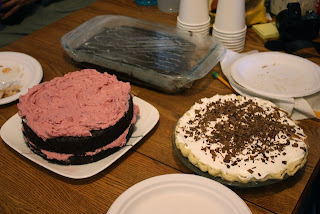 Between the ganache covered brownies, peanut butter pie and chocolate cake with raspberry whipped buttercream – I was a goner.
My baby is the layer cake. Tory lighted my life with that peanut butter pie and Kristie stole my heart with the double chocolate delight.
Robert (the Ring Leader of our team and Coaching Master) initially requested a three layer chocolate cake with custard and raspberry between the layers, but my time ran out and I copped out with a mis-mash combining the two. Dang was it ever a fabulous decision.
For the Whipped Raspberry Buttercream, you’ll need
~ 4 cups, sifted powdered sugar
~ 1/2 cup milk
~ 1/4 tsp salt
~ 1 teaspoon vanilla
~ 2 sticks, unsalted butter (yes, unsalted and softened)
~ 1/2 cup shortening
~ 1 can (8oz) Raspberry Pie Filling
With electric mixer whisk together powdered sugar, salt, vanilla and milk until smooth.
Add butter, a few bits at a time until incorporated. Whip in shortening on high for about 5 minutes.
Lastly, add in raspberry pie filling. Whip for an additional 5 minutes until light and fluffy. Dollop onto cake and savor. Or just dip in a spoon, you know you want to.
(Click here for the Printable!)
And with that, I think I’m going to run a marathon to finish burning off all of the ooey gooey deep fried deliciousness of the last weekend.  Away with you chicken skin!
*And as a reminder – click the link to enter the Summer is On the Horizon Giveaway!)
This site contains affiliate links, if you make a purchase through them, we receive a small commission.
Logger Sports Lumberjack